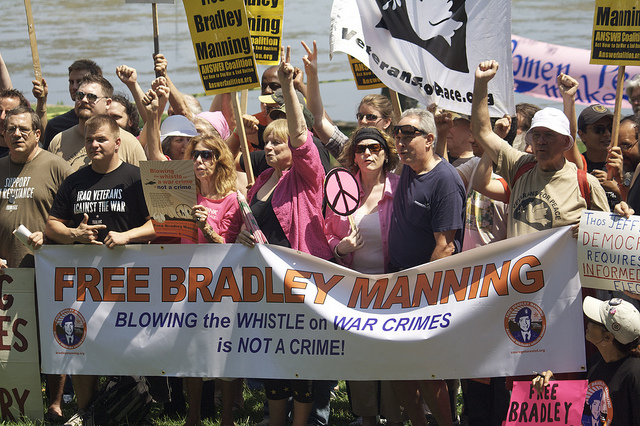 The attorney for suspected WikiLeaks source Pfc. Bradley Manning filed a formal complaint this week over Manning’s treatment at the Marine Corps brig where he is being detained.

Attorney David E. Coombs filed the complaint Wednesday, the day after Manning was abruptly placed on suicide watch by the commander of the U.S. Marine Corps brig in Quantico, Virginia. During the suicide watch, Manning was confined to his cell around the clock, while a guard sat outside watching him.

The commander removed Manning from suicide watch Thursday, but Coombs said the development was only the latest issue in Manning’s seven months of highly restrictive pretrial confinement, where he’s been awaiting a mental-health hearing to determine if the court-martial case will proceed to the next step.

Manning has spent most of that time as a maximum-custody detainee under prevention-of-injury, or POI, watch. “Like suicide risk, he is held in solitary confinement, Coombs wrote on his blog Friday. “For 23 hours per day, he will sit in his cell.”

In his Article 138 complaint, Coombs asked that Manning’s custody level be lowered from maximum to medium security, and that he be removed from the POI watch.

The military’s concern over the 23-year-old Manning’s mental health dates back to late 2009, when Manning was deployed as an intelligence analyst at Forward Operating Base Hammer in Iraq. Coombs acknowledged last September that Manning’s Army unit “has in fact documented a history, if you will, from as early as December of 2009 to May of 2010 of behavior that they were concerned about.”

This included “prolonged periods of disassociated behavior, quite a bit of nonresponsiveness from Pfc. Manning … that progressed from the very beginning of the deployment and deteriorated somewhat toward the end,” he said. At one point, while Manning was deployed as an intelligence analyst in Iraq, his superiors grew concerned enough that they removed the bolt from his military weapon, disabling it, Coombs said at the time.

Coombs, who did not respond to a request for comment, wrote Friday that when Manning first arrived at the brig last July he was classified as a suicide risk. But shortly thereafter, following the recommendation of a brig psychiatrist, his classification was downgraded from suicide risk to prevention-of-injury watch.

The psychiatrist later recommended Manning’s classification be changed from maximum custody to medium custody, since he had adjusted well to his confinement. The Quantico brig commander has never acted on that recommendation, Coombs wrote.

Instead, on Jan. 18, the Quantico brig commander placed Manning under suicide watch again. Coombs maintained this occurred despite consistent assertions by two psychiatrists over many months that Manning is not a suicide risk. With assistance from the Judge Advocate’s office, Coombs managed to get the brig to reconsider and remove the suicide watch.

A brig spokesman told Threat Level that the status of detainees is under constant review and that determinations to change it come with input from many sources, not just psychiatrists.

“That is a determination that is made based on input from medical professionals, psychological providers, religious specialists and the marines that work in the brig,” said 1st Lt. Brian Villiard. “Each one of those different sources provide information for the brig commander to make what he thinks is the most appropriate action.”

Villiard wouldn’t discuss the specific details that caused the brig commander to put Manning on suicide watch, but said if a detainee “were to demonstrate something that caused somebody to be concerned,” it could be cause to place him on watch.

Manning was arrested last May in Iraq after telling a former hacker that he had leaked vast amounts of classified material to the secret-spilling site WikiLeaks. He was transferred to Kuwait, where he was detained for about two months before being moved to the brig in Virginia. Manning has been held there in maximum security waiting to see how the military plans to handle his case.

At the same time, U.S. prosecutors have reportedly been trying to develop a criminal case against WikiLeaks founder Julian Assange on the theory that he conspired with Manning to siphon classified documents from a government network and publish them online. Assange has said he believes Manning is being mistreated in order to pressure him into cooperating in a case against Assange, and WikiLeaks supporters have decried Manning’s treatment as a form of torture.

Coombs told The Washington Post that, in addition to the complaint filed this week, he plans to file a motion alleging that the conditions under which Manning has been confined amount to unlawful pretrial punishment.

Writing on his blog, Coombs summarized the conditions.

The guards will check on him every five minutes by asking him if he is okay. PFC Manning will be required to respond in some affirmative manner. At night, if the guards cannot see him clearly, because he has a blanket over his head or is curled up towards the wall, they will wake him in order to ensure that he is okay. He will receive each of his meals in his cell. He will not be allowed to have a pillow or sheets. He will not be allowed to have any personal items in his cell. He will only be allowed to have one book or one magazine at any given time to read. The book or magazine will be taken away from him at the end of the day before he goes to sleep. He will be prevented from exercising in his cell. If he attempts to do push-ups, sit-ups, or any other form of exercise he will be forced to stop. He will receive one hour of exercise outside of his cell daily. The guards will take him to an empty room and allow him to walk. He will usually just walk in figure eights around the room until his hour is complete. When he goes to sleep, he will be required to strip down to his underwear and surrender his clothing to the guards.

Villiard said that these conditions are the same for all detainees who are classified under maximum-detention and prevention-of-injury status.

“The fact that it is Bradley Manning is not an issue for us, the fact that we have a maximum-custody detainee is the issue,” he said. “We have a responsibility to make sure that all detainees are safe, secure and make it to trial.”