Egypt Shut Down Its Net With a Series of Phone Calls 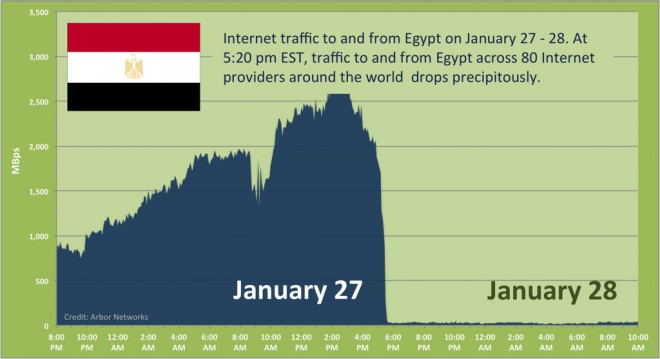 Egypt’s largest ISPs shut off their networks Thursday, making it impossible for traffic to get to websites hosted in Egypt or for Egyptians to use e-mail, Twitter or Facebook. The regime of President Hosni Mubarak also ordered the shut down of mobile phone networks, including one run by the U.K.-based Vodafone, all in an attempt to undermine the growing protests over Mubarak’s autocratic rule of the country.

While the world has seen net filtering and disruption in places like Burma and Iran following social and political unrests, Egypt’s decision to shutter it is different, according to Craig Labovitz, the chief scientist at Arbor Networks, a computer security firm that has nearly unequaled real data on international internet traffic.

“What’s different with Egypt is the scale,” Labovitz told Wired.com. “By that I mean that Egypt has fairly significant internet infrastructure with a diversity of paths — satellite, microwave and fiber links — a number of large providers and hundreds of smaller providers. It is one of the more significant internet infrastructures in the Middle East and certainly within Africa. Egypt has a very well-developed economy with a significant reliance on the internet, this is very different from Burma.”

So how did Egypt shut down the net? Did someone in the government hit a giant stop button?

“I do like the image of a big red switch sitting on a desk somewhere, but Egypt has a significant infrastructure,” Labovitz said.

“There are a handful of big providers you would need to coordinate with and they are all licensees of the state telecom, so they are all beholden to the Telecommunication Regulatory Authority, so your license is dependent on following the rules,” Labovitz said.

That comports with the data published by Renesys, a net monitoring firm, which saw individual ISPs go dark within minutes of one another.

“First impressions: this sequencing looks like people getting phone calls, one at a time, telling them to take themselves off the air, ” wrote Renesys’s chief scientist James Cowie. “Not an automated system that takes all providers down at once; instead, the incumbent leads and other providers follow meekly one by one until Egypt is silenced.”

Still at least one ISP, the Noor Group, remains active, providing connectivity to Egypt’s stock exchange and some government ministries, according to Renesys.

The cutoff was quickly criticized by the D.C.-based Center for Democracy and Technology.

“This action is inconsistent with all international human rights norms, and is unprecedented in Internet history,” CDT president Leslie Harris said. “Egypt’s actions will only fuel unrest and make peaceful resolution of grievances far more difficult.”

There’s been some confusion in the media about people being able to get around the block using proxies or other anti-snooping tools, according to Labovitz. These won’t work when the ISPs have simply shut down.

“No amount of cleverness of tunneling will help you if you don’t have a dial-tone,” Labovitz said.