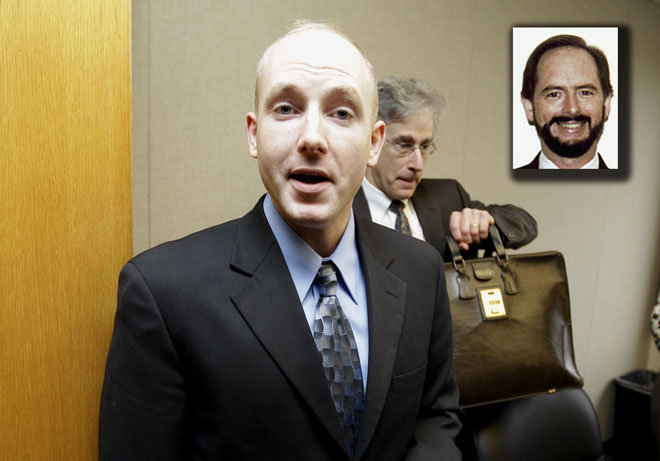 A disgraced CIA agent serving 23 years for being a Russian spy was handed eight more years Tuesday for hiring his son to collect overdue bills linked to the father’s nefarious espionage activities.

The 59-year-old father, Harold Nicholson, had enlisted his now-26-year-old son, the youngest of three children, to collect his unpaid bills from the Russians. The son flew from Portland, Oregon, to numerous destinations, including San Francisco, Mexico City, Peru and Cyprus — bringing back tens of thousands of dollars in cash. The money was disbursed to family members.

It was the first U.S. spy case (.pdf) in which a jailed spy was convicted again of espionage involving the same country.

“Harold Nicholson betrayed his country, and he betrayed his family — and stooped so low as to involve his son in his corrupt scheme to collect money for his spying,” Dwight C. Holton, the Oregon U.S. attorney, said in a statement.

At one point, according to the authorities, the son returned to the United States from Peru in possession of a small notebook containing “clandestine communication instructions” on how to communicate in code via an internet e-mail account about future meetings with the Russians. The notebook also contained coded messages to be used by the son, Nathaniel Nicholson, when he met with the Russian Federation to confirm his identity, according to court documents.

U.S. District Judge Anna Brown of Portland noted that the father could have been released in 2017 at age 66. But with the latest conviction, he is not likely to leave prison until 2025, the Associated Press reported.

The father, nicknamed “Batman,” was already serving 23 years in an Oregon prison after pleading guilty a decade ago to furnishing the Russians “documents, photographic negatives and information relating to the national defense of the United States, with the intent and reason to believe that the same would be used to the injury of the United States and to the advantage of the Russian Federation,” according to an FBI affidavit (.pdf). As part of that plea deal, he admitted that during his 16-year tenure, he received $300,000 from Russia (and earlier, the Soviet Union) for supplying the identity of CIA operatives in Moscow, including their code names.

Prison authorities became suspicious of the father after an inmate at the federal penitentiary in Sheridan, Oregon, tipped off the authorities that the convicted CIA agent was trying to contact the Russians. The authorities began to eavesdrop on the son’s cell phone, internet searches and e-mail, court records show. The son often visited his father in prison.