In a Single Month, the Occupation Became a Force 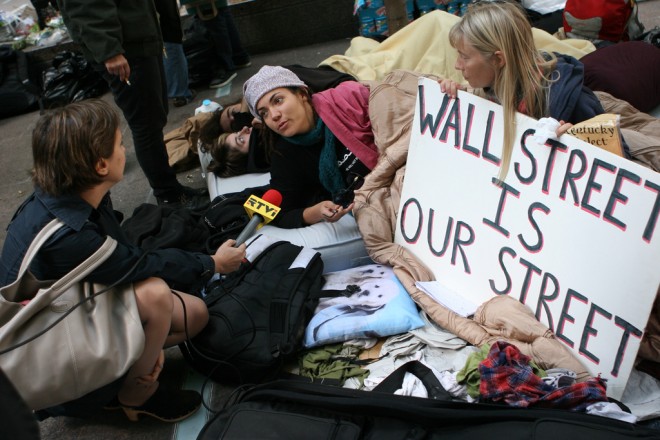 On Sept. 17, Constitution Day, about 1,000 people assembled in lower Manhattan to protest Wall Street, the government’s bailout of too-big-to-fail banks, and the growing gap everywhere between rich and poor.

The world ignored them.

Around 150 stayed to “occupy” the park, living there in sleeping bags, laying claim to this New York, this America, as theirs. They were a curiosity. Tourists visited them. They were largely mocked or overlooked by the media. On Sept. 26, NPR’s news director, Dick Meyer, summarized big media’s collective view: “The recent protests on Wall Street did not involve large numbers of people, prominent people, a great disruption or an especially clear objective.” The implicit message was this: Without these things, #occupywallstreet could not matter.

But they went on occupying. They marched, carrying handmade signs with slogans serious and funny. They chanted “Whose street? Our Street!” and “Banks got bailed out, we got sold out!”  Their numbers swelled during the day, and dropped off at night. They got into some trouble with police, but they stayed.

They talked about representing the 99 percent of the population left behind by an economy that’s increasingly rigged against them. Something in the conversation changed, and people in city after city picked up and moved to parks, lawns, bit of sidewalk. They pitched tents, built kitchens, opened Twitter accounts, started to #occupy their city.

By Oct. 15, the occupation had spread to hundreds of cities, in America and across the world, and that Saturday witnessed mostly peaceful marches comprised of tens of thousands of citizens across the world. 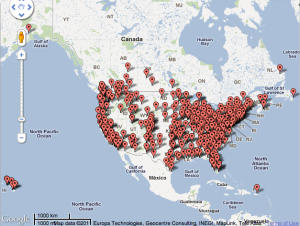 For much of my adult life I’ve been told that the American Body Politic was apathetic. We didn’t vote, we didn’t get politically active the way people had in the 1960s with the civil rights movement and the protests against the Vietnam war. We didn’t serve the way we had in WWII, we didn’t work together the way we had in the Great Depression. After 9/11, the government’s siren call to citizens asked us simply to continue shopping and to report suspicious neighbors. We were ill-informed, checked out, and would put up with anything.

But this was never what I saw and heard around me in America. Americans want to be masters of their own fates. The great ideas about what it means to be an American are around self-determination, work, and responsibility — both individual and civic. If Americans were checked out of the political process, it was because the process had failed them — not that Americans had stopped being the democratic people that Alexis de Toqueville found himself oddly smitten with in the 1830s.

This wasn’t apathy; this was at least the perception of disenfranchisement, if not disenfranchisement itself. We knew our votes didn’t really count, and that protests wouldn’t change anything. From where I was sitting, the Body Politic fell quiet in frustration and disgust, not apathy. The people were seething in impotent silence.

In this way, the sudden fire that seemed to light up the #occupations and those around them didn’t seem strange at all. The first month of the #occupation has gone from one protest to thousands, from a few people drawn in by a counter-culture magazine called Adbusters, which originally proposed the idea, and the online collective, Anonymous, which shortly thereafter jumped on board. Now labor unions, professional associates, student groups and veterans groups have joined in.

It’s gone from being mocked by major media to endorsed by several top Democratic lawmakers. The occupiers have had a range of responses from the cities they “occupy”, from hundreds of arrests during violent clashes in Boston, New York, and Chicago to a city council resolution in support of the movement in Los Angeles. Police in several cities have confiscated the protestors’ possessions — repeatedly so in San Francisco — but every major occupation cleared out has begun to rebuild within hours.

Commentators of all stripes and strata are talking about the #occupation now. Some lavish praise, some jeer and others chime in to suggest bullet points for a manifesto. But no one is calling the occupying protestors apathetic. And no one is ignoring the very loud “No!” that has swelled up from the street since Sept. 17. 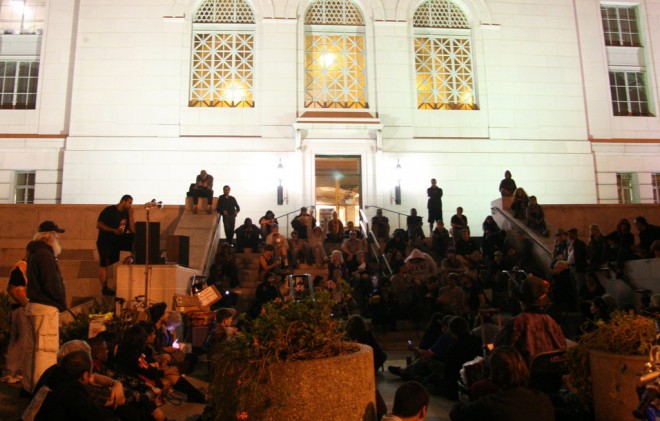 #OccupyLA lives in the park that surrounds Los Angeles City Hall. It is a stable tent village with no police presence to speak of, after a resolution from the Los Angeles City Council on Oct. 12 in support of the peaceful movement.

It is run by a number of committees, and has infrastructural tents in addition to living tents: medical, food, meditation, information/welcome tent, etc., though the largest and most decked-out tent is media — where the livestream is running, and the internet part of the occupation lives. #OccupyLA is a welcoming environment; people are warm and happy to stop what they’re doing to help you, but it’s not unconflicted.

On one side of a lawn is a sign slamming “Zionists” as terrorist financiers; on the other side of the same lawn a large sukkah, or temporary dwelling, has been set up for the Jewish holiday of Sukkot. The occupiers live in a state of tolerance, sometimes tense, with people they wouldn’t normally hang out with. They come from all age groups, races, and class backgrounds.

No simple description of the occupiers can be accurate. They fight, yell, and stomp off from committee meetings. They fought for the rights of those they disagree with to speak. They put together a plan for obtaining and guarding food.

They used their consensus model to question the usefulness of their consensus model. Spend a little time at an occupation, and it becomes clear: There are as many reasons to protest as there are people in the protests, and the only qualities close to pervasive are a sense of frustration with the system (and sometimes each other), determination, and a work ethic powerful enough to build and maintain a village from nothing.

One occupier, “Matt,” looked to be in his late 30s. He had short hair, was cleanly shaven, and plainly dressed. Unlike most occupiers, he didn’t tell me a personal story about how he’d gotten here. He started off with a handshake, and said, “We’ve got to get money out of politics.”

Matt was shaky and seemed slightly troubled, but it’s hard to tell how much of that is a result of living in a tent on City Hall’s front lawn for two weeks. He talked like a man haunted, trailing his sentences off as if something was rolling in behind his eyes to take their place. For Matt, the entire political system is corrupted by corporations, and other problems stem from that one.

“How do you fix anything when your tools are broken?” he asked, palms skyward in a gesture of helplessness.

He traced a line from corporate political funding to the crushing debt so many occupiers contend with, and the destruction of the environment, though with the caveat, “I’m no tree hugger.” He talked about FDR, saying his vision died with him. I asked him how long he’d be here.

“I have no exit strategy,” he said. He has no other plans for his future until things get better. For Matt, the occupation is the beginning.

When I left, the General Assembly had been going for a couple of hours. It was highly contentious, more so than usual from what those around me were saying. Some people walked out, but most stayed, settled in for the long haul.