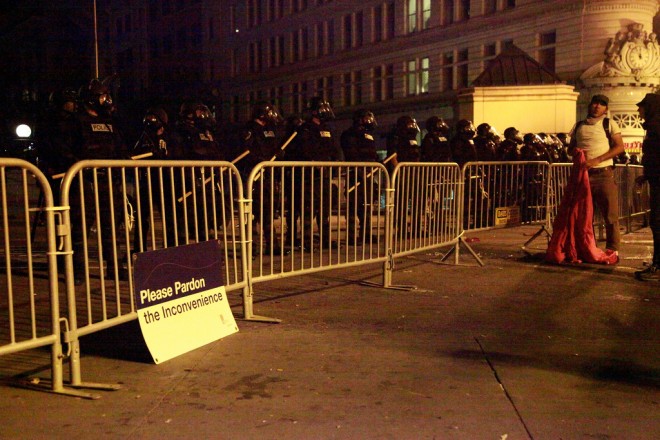 Police violently evicted OccupyOakland, one of the more established and extensive of the occupations, on Tuesday shooting at protestors with projectile rounds and tear gas, drawing national attention.

Over the course of 24 hours, starting with an early morning raid, hundreds of police officers took back control of the square and removed tents.

Police arrested nearly 100 protestors — firing so-called less lethal rounds into the crowd, and using tear gas to attempt to disperse protestors who tried to return to the square. Protestors also accused the police of using flash bang grenades and a sound cannon. The Guardian reported that Iraq war vet Scott Olsen is in a local hospital in critical condition with a skull fracture and brain swelling.

Last night, after the bangs had died down and the tear gas blown away, about a dozen protestors remained. A line of police stood on the other side of a barrier, surrounded by piles of broken glass, unidentifiable debris, a book about Glenn Beck and even a pair of panties, all of which, being on the wrong side of the barricade, had presumably been thrown at the police.

Where I stood, rubber bullets littered the 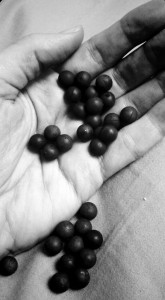 ground, and the intersection’s pavement bore marks where the teargas canisters hit.

The protestors I talked to said they had been teargassed several times.

Police forces from around the Bay Area participated in the eviction, though Oakland officials have not yet responded to a request to clarify about the exact makeup of the force. Across the barrier, I saw an officer in unfamiliar brown uniform. I tapped my arm in the same spot where the crest was on his uniform, and shouted over the barricade “Where from?” He shouted back “Marin County!,” referring to the wealthy county just north of San Francisco. I stopped walking and said “Wow!” He laughed in response, and said, “Me too!”

After the shouting died down, there was some cordial conversation between protestors and Oakland police officers — and protestors even pushed a tray of coffees under the barricades for the officers, though they politely refused.

This evening at 6 p.m., it’s all scheduled to happen again, with a rally and general assembly scheduled to meet at the plaza. Wired will be on the scene.