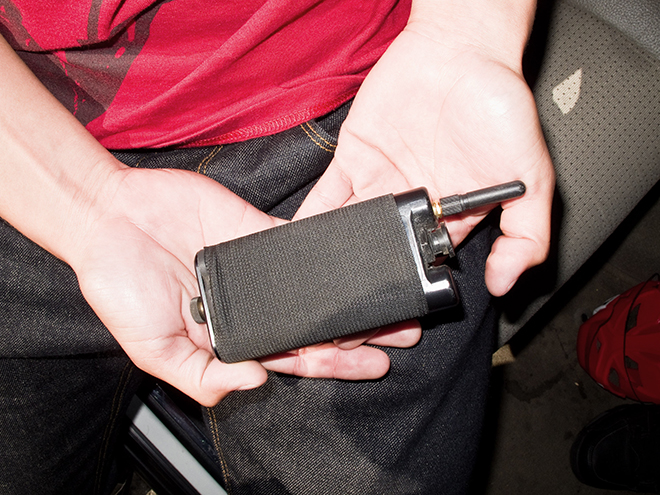 This GPS tracker was one of two found on the bottom of a California man's car in October. Photo: Jon Snyder/Wired.com

There’s plenty of reason to be concerned Big Brother is watching.

We’re paranoid not because we have grandiose notions of our self-importance, but because the facts speak for themselves.

Here’s our short list of nine reasons that Wired readers ought to wear tinfoil hats, or at least, fight for their rights and consider ways to protect themselves with encryption and defensive digital technologies.

We know the list is incomplete, so if you have better reasons that we list here, put them in the comments and we’ll make a list based off them.

Until then, remember: Don’t suspect a friend; report him.

The government refuses to acknowledge whether the National Security Agency is secretly siphoning the nation’s electronic communications to the National Security Agency without warrants, as the Electronic Frontier Foundation alleges. The lawsuit was based on evidence provided by a former AT&T technician Mark Klein that showed that AT&T had installed a secret spying room in an internet hub in San Francisco. The spying got so bad that Attorney General Ashcroft threatened to resign over it.

When a federal judge said a lawsuit on that issue could go forward, Congress passed legislation stopping the case in its tracks. Two American lawyers for an Islamic charity did, however, prevail in their suit that they were wiretapped without warrants, but the Administration is appealing. Much of the program was legalized in 2008 by the FISA Amendments Act.

The FBI has also built a nationwide computer system called the Digital Collection System, connected by fiber optic cables, to collect and analyze wiretaps of all types, including ones used in ultra-secret terrorism investigations.

The Obama administration claims Americans have no right to privacy in their public movements. The issue surfaced this month in a landmark case before the U.S. Supreme Court to determine if law enforcement agents should be required to obtain a probable-cause warrant in order to place a GPS tracking device on a citizen’s car. The government admitted to the Supreme Court that it thinks it would have the power to track the justices’ cars without a warrant.

The invasive technology allows police, the FBI, the Drug Enforcement Administration and other agencies to engage in covert round-the-clock surveillance over an extended period of time, collecting vast amounts of information about anyone who drives the vehicle that is being tracked. The Justice Department has said that law enforcement agents employ GPS as a crime-fighting tool with “great frequency,” and GPS retailers have told Wired that they’ve sold thousands of the devices to the feds.

Tracking Devices in Your Pocket

That mobile phone in your pocket chronicles almost everything. Once-secret software developed by a private company pretty much chronicles all you do on your smartphone and sends it to the carriers. The carriers themselves keep a wealth of information, such as text messages, call-location data, and PINs — though none of them disclose to their customers what data they store or how long they keep the data.

Law enforcement can get at much of that historical data — and often get real-time tracking information without proving probable cause to a judge.