An Open Letter to Police on the Occasion of This Eviction 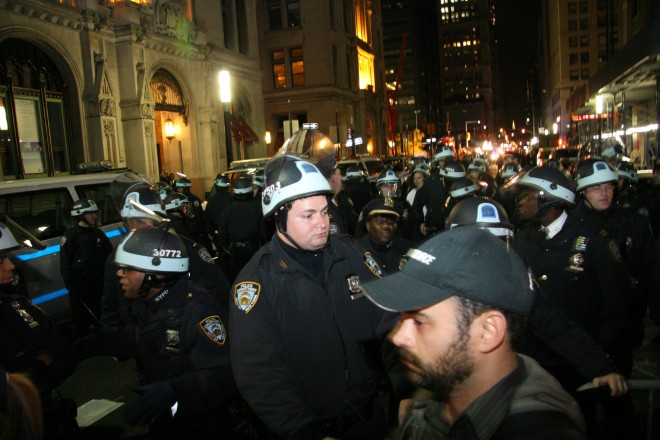 The police line at Pine and Broadway, the night of the Zuccotti eviction

Dear Police, upon the occasion of the eviction of Occupy Philadelphia and Occupy LA:

It is not my place to say whether what you are about to do is right or wrong, and it doesn’t matter what I believe either way. You are going to evict this occupation, and all the resistance this ragtag band of sleep-deprived community organizers, volunteers, and chronically homeless could put up might, at best, delay you by a matter of hours. You, the occupiers, and we in the media: we all know these conflicts can only have one outcome.

What I am asking you to change is your demeanor. I have seen you be confrontational, frivolous, spiteful, insulting, self-righteous, and even at times, solemn.

There is something I’d like you to know about what you’re about to do. You don’t know these occupys like I do. This isn’t your fault; you can’t. You’re largely not welcome in many of them, because we all know what you will eventually do to them. Even if you’ve visited, you have to hold yourself distant from their story, even as I immerse myself in it. You’d no more want to hang out and get to the know the camps the way I have than you’d want to cuddle and name a calf that’s meant to be tomorrow’s veal dinner.

These camps, these collections of tarps and tents, are more than you see. They are the sweat and treasure of hundreds, sometimes thousands of people trying to learn how to take care of each other. The fucked-up kids, street kids and old homeless are as important as the community organizers and grad students.

They’ve all come to this place and tried to build a way to talk to and take care of each other, after giving up on a system they believe has failed them. This is what they’ve poured their hearts and their best thinking into. It may not be legal. It may, in your opinion and many others, not even be a good idea. But they’ve built a village. There are libraries and kitchens, places for women, places to provide shelter and clothing. There are even little temples here.

People have sanctified this space with their hope. It is imprinted with their lost nights, their spare money, their effort and their bodies. The places you see covered in plastic sheets and bric-a-brac are thick with memories: the echos of unguarded conversations, of commitments made, of love and struggle and compromise.

When you go in and wipe this place clean, and you will, what I ask is that you do it solemnly.

Do it with the gravity of the execution, not the frivolity of the easy triumph.

When people scream at you, think of them as the family members of the condemned, not as your enemies. Be, insofar as you can, gentle. Remember that when you are gone tomorrow and there is nothing left, these people will remain, not merely angry but emptied of effort. They will be hunting for friends lost in the fray, for scraps and bits of the life they built together. They will have lost their place to be in the world.

Remember that these people, whether misguided or not, stayed because they all found here something they needed. Some of them were listened to for the first time in their lives here; others found a place where people accepted them. A few were told hard truths about their own failings.

There are middle-class professional occupiers here who did something they believed in for the first time in many years. They’d lived outwardly successful but inwardly desperate lives, drained of the sense that anything they did could ever matter.

A few even came to prey on this place, but found something that mattered more than their own appetites for the first time. Almost none of them were good at being these new people, and it will show. I’m sorry for that. These people were weeks in on years-long journeys to be new.

Be merciful in the execution of your orders. Respect, if not the thing built, the hearts behind the building.