Anonymous 101: Introduction to the Lulz 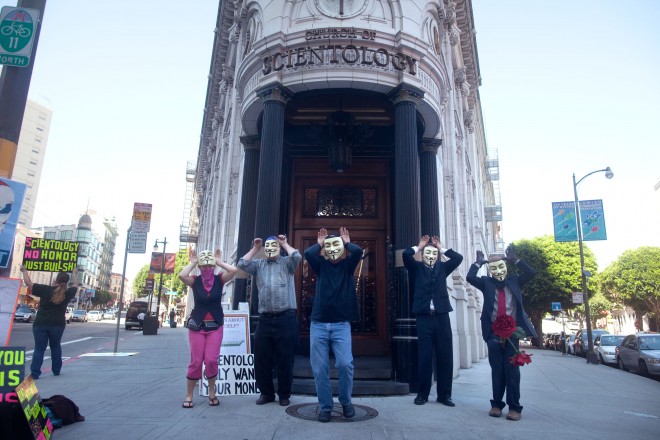 Anonymous has kept up its monthly protest, including this one from Nov. 13, 2011, outside the Church of Scientology headquarters in downtown San Francisco.

(Any decent coverage of Anonymous is going to verge on some NSFW material at points. There will be questionable language and strange imagery.)

Last week the net and the media were ablaze with the news that Anonymous might be taking on the Zeta drug cartel in Mexico, a story that has morphed into a wider drug corruption story, and led to one American law enforcement official in Georgia being named as a Zeta conspirator.

They’ve created law enforcement excitement that’s verged on panic, given net and media pundits hyperbolic logorrhea about “cyber terrorism” and “cyber freedom,” and happily skipped between damn funny, deeply disturbing, and self-aggrandizing, depending on the mood of the hive mind at the moment.

But what is Anonymous?

In this in-depth series, “Anonymous: Beyond the Mask,” we’re going to do our best to answer that.

“The trickster does exist across America, across Europe, really across the world and it is not in myth but in embodied in group and living practice: in that of the prankster, hacker, the phreaker, the troller (all of whom, have their own unique elements of course, but so does each trickster),” she wrote in Social Text.

The trickster isn’t the good guy or the bad guy, it’s the character that exposes contradictions, initiates change and moves the plot forward. One minute, the loving and heroic trickster is saving civilization. A few minutes later the same trickster is cruel, kicking your ass and eating babies as a snack.

The conversation about Anonymous points to this trickster nature, veering between praise and fear, with the media at a loss for even how to describe them.

We’ve tried hacker group, notorious hacker group, hacktivists, the Internet Hate Machine, pimply faced, basement-dwelling teenagers, an activist organization, a movement, a collective, a vigilante group, online terrorists, and any number of other fantastical and colorful terms. None of them have ever really fit. Anonymous has constantly forced us to reach for the thesaurus — revealing that as a whole, we in the media have no idea what Anonymous really is or what it means.

It wasn’t until I downloaded and listened to Lulz: A corruption of LOL’s second album, Corruption, that I grasped what Anonymous really is.