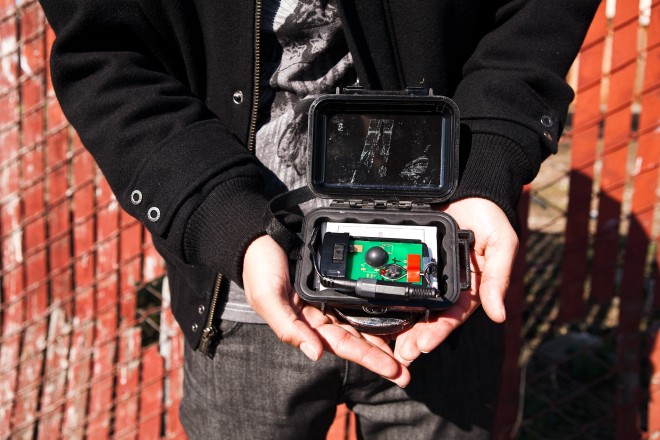 The second of two GPS trackers found recently on the vehicle of a young man in California.
Photo: Jon Snyder/Wired.com

As the Supreme Court gets ready to hear oral arguments in a case Tuesday that could determine if authorities can track U.S. citizens with GPS vehicle trackers without a warrant, a young man in California has come forward to Wired to reveal that he found not one but two different devices on his vehicle recently.

The 25-year-old resident of San Jose, California, says he found the first one about three weeks ago on his Volvo SUV while visiting his mother in Modesto, about 80 miles northeast of San Jose. After contacting Wired and allowing a photographer to snap pictures of the device, it was swapped out and replaced with a second tracking device. A witness also reported seeing a strange man looking beneath the vehicle of the young man’s girlfriend while her car was parked at work, suggesting that a tracking device may have been retrieved from her car.

Then things got really weird when police showed up during a Wired interview with the man.

The young man, who asked to be identified only as Greg, is one among an increasing number of U.S. citizens who are finding themselves tracked with the high-tech devices.

The Justice Department has said that law enforcement agents employ GPS as a crime-fighting tool with “great frequency,” and GPS retailers have told Wired that they’ve sold thousands of the devices to the feds.

But little is known about how or how often law enforcement agents use them. And without a clear ruling requiring agents to obtain a “probable cause” warrant to use the devices, it leaves citizens who may have only a distant connection to a crime or no connection at all vulnerable to the whimsy of agents who are fishing for a case.

The invasive technology, for example, allows police, the FBI, the Drug Enforcement Administration and other agencies to engage in covert round-the-clock surveillance over an extended period of time, collecting vast amounts of information about anyone who drives the vehicle that is being tracked.

“A person who knows all of another’s travels can deduce whether he is a weekly church goer, a heavy drinker, a regular at the gym, an unfaithful husband, an outpatient receiving medical treatment, an associate of particular individuals or political groups — and not just one such fact about a person, but all such facts,” wrote U.S. Appeals Court Judge Douglas Ginsburg in a recent ruling that the Supreme Court will be examining this week to determine if warrants should be required for use with trackers.

Greg says he discovered the first tracker on his vehicle after noticing what looked like a cell phone antenna inside a hole on his back bumper where a cable is stored for towing a trailer. The device, the size of a mobile phone, was not attached to a battery pack, suggesting the battery was embedded in its casing.