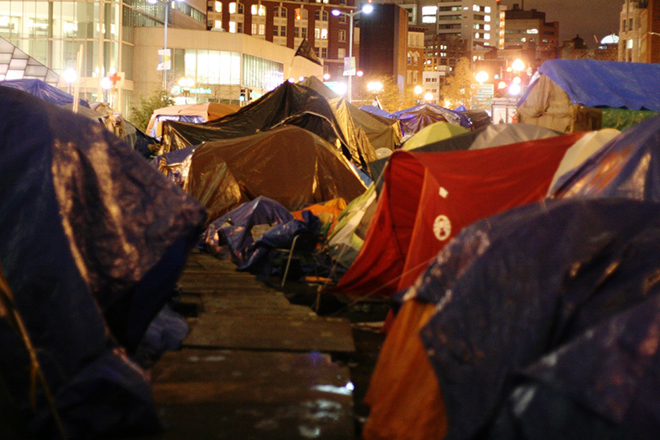 Between the 19th and the 21st of November, Occupy Boston had two teach-ins, a street-theater training, a reggae concert, and countless meetings — managing to use one of those as a cover to sneak a large weatherized tent past the ever-present Boston Police.

It was a member of the Occupy Boston’s Women’s caucus that told me they’d managed it, grinning widely, just as the tent was being set up as a dry, safe, and relatively warm place for women to shelter in the Occupy.

“It’s considered contraband,” she said, though she was gone before I could ask who considered it so. It was my introduction to the problems faced by these new residents of Dewey Square, in Boston’s Financial District, where it plays out its particular flavor of protest camp in the shadow of the Federal Reserve Bank of Boston.

Occupy Boston is a big occupation in every way, full of saints and sinners, human drama, pain, and the hint of redemption. It’s a far cry from the Harvard Occupation, just miles away, made staid by Harvard’s guards who won’t let anyone in who doesn’t have an ID from the Ivy League school. (See companion story.)

Jose Wiley, 32, volunteers in Logistics and lives at the Occupy. He moved to Los Angeles to become a filmmaker, but returned frustrated and unable to find work.

“We’re all at that stage in our lives where we should be building our careers and it’s not been an option for a lot of us,” says Wiley. “I often say that’s why I think this movement popped up overnight and exploded, and it has so many deeply committed people…. I think maybe some of us are realizing that maybe what we’d hoped for in life isn’t going to happen.”

Wiley mans the Logistics tent, a shade structure with shelves of organized, masking-tape-and-marker-labeled supplies, sitting next to piles of as yet unsorted donations. It’s incredibly busy. While we talk, he still handles requests, giving out batteries to members of the Safety crew, socks to old homeless men, and telling people where to go to find food, blankets, and other people in the Occupy.

“This is something to commit to,” he says. He takes a break and gives me the tour, pointing out different people in the community, tells me who they are and what they do for Occupy Boston. The community gives them something to care about, he explains. “That’s what a lot of this is. We’re rediscovering our self respect.”