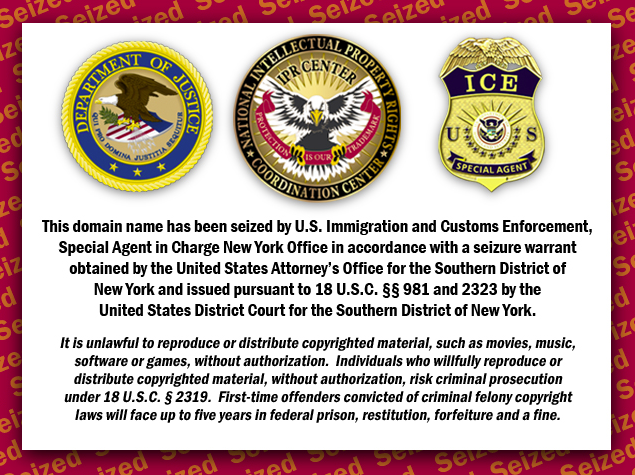 Federal authorities have seized the online names of 150 websites allegedly hawking counterfeit and copyright goods, bringing to 350 the number of domains taken as part of a forfeiture program that began a year ago.

Monday’s announcement of the seizures falls on the biggest online shopping day of the year, known as “Cyber Monday.” The development comes as Congress is debating granting private rights holders the ability to cripple websites by blocking ad traffic and financing to sites they believe are violating their copyright and trademark rights.

“Through this operation we are aggressively targeting those who are selling counterfeit goods for their own personal gain while costing our economy much-needed revenue and jobs,” Attorney General Eric Holder said in a statement. “Intellectual property crimes harm businesses and consumers, alike, threatening economic opportunity and financial stability, and today we have sent a clear message that the department will remain ever vigilant in protecting the public’s economic welfare and public safety through robust intellectual property enforcement.”

Federal authorities are taking .com, .org. and .net domains under the same civil-seizure law the government invokes to seize brick-and-mortar drug houses, bank accounts and other property tied to alleged illegal activity. The feds are able to seize the domains because Verisign, which controls the .net and .com names, and the Public Interest Registry, which runs .org, are U.S.-based organizations. Under civil forfeiture laws, the person losing the property has to prove that the items were not used to commit crimes.

Immigration and Customs Enforcement leaves behind a message to online visitors that a site has been seized under a program called “Operation in Our Sites.”  Those messages have received 77 million page views, the government said.

Sen. Ron Wyden (D-Ore.) has questioned the operation, saying the process does not give “targeted websites an opportunity to defend themselves before sanctions are imposed.”

At least one site has unsuccessfully challenged a forfeiture in federal court, a decision that is on appeal.

The site’s .com and .org domains were seized in January along with eight others connected to pirated streams of professional sports. Puerto 80, which owns the site, claims Rojadirecta had some 865,000 registered users until its seizure, and denies committing copyright infringement.

Puerto 80 describes the site as a discussion board where members can talks sports, politics and other topics, and it additionally links to sports streams hosted elsewhere. The site, which now operates as Rojadirecta.me, also includes a section called downloads, where users post links to recorded sporting events that can be downloaded from file-sharing sites.

Here is a list of the affected sites, as first reported by TorrentFreak.