Occupy Harvard’s an Exclusive Affair, But Not By Choice 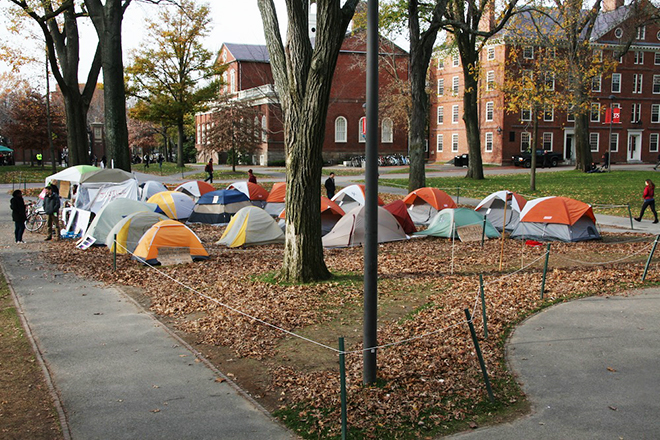 When Harvard’s Occupy set up camp in the famous Harvard Yard, the university didn’t evict them or harass them. Instead, the Ivy League institution just made the protest exclusive by cloistering the protestors off from the outside world.

That makes Harvard’s Occupation far different from the boisterous, embattled and gritty Boston Occupation just a few miles away (see the accompanying story).

Occupy Harvard lives in about 20 tents in the heart of the Harvard campus, underneath the John Harvard statue, manned by a group of students who rotate through from the surrounding dorms.

The Yard is ringed with old, beautiful brick buildings, which are in turn ringed with an iron and brick fence. Harvard-hired guards and Harvard police man the gates around the Occupy encampment 24 hours a day, checking for Harvard IDs. The only visitors the Occupy protestors ever see are those who have a Harvard ID, and those who jump the fence quietly when no one is looking.

I did neither. I stationed myself at the front desk of the building that contained Harvard’s Department of News and Media Relations. I stayed there for a little over an hour, calling their office repeatedly and mailing the director to say I was right downstairs, and wanted to interview the Occupy. Eventually, they sent a staffer to walk me past the guards. She stood quietly by in the cold and waited as I explored Harvard’s small Occupy and spoke with its participants.

They’ve attracted high-profile visitors including Nobel Peace prize nominee Ahmed Mahar of the Egyptian protests. But even for him, the university did not relent in their policy; Mahar wasn’t allowed into the Yard, and delivered his address through the fence using the people’s mic — where occupiers and other Harvard ID-carrying supporters repeated Mahar in phrase-long chunks.

“Here’s this guy that overthrew a government, and he couldn’t get into Harvard,” says Divinity grad student Jeff Bridges, laughing.