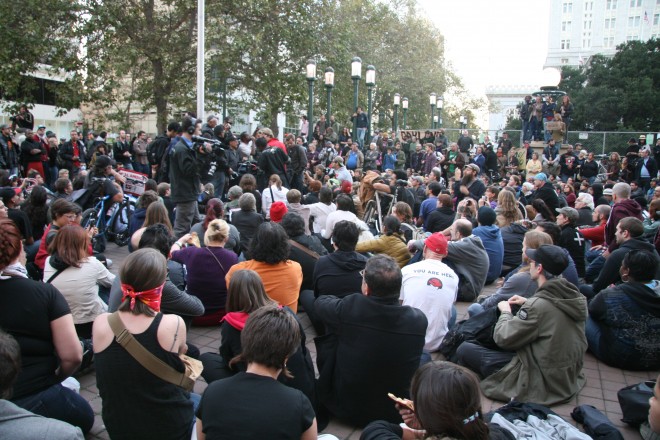 Occupy Oakland re-occupied their original sites after being evicted last Tuesday, and at this General Assembly that day, they voted for a Nov. 2 general strike in Oakland.

Occupy Oakland, now completely re-established in its original plaza as well as nearby Snow Park, has called for a general strike for Wednesday, Nov. 2nd in Oakland.

Occupy’s General Assembly, a meeting open to all that requires consensus for decisions, approved the call last Wednesday, the day after the now infamous Occupy Oakland eviction that lead to the use of tear gas and rubber bullets on protestors, resulting in a critical head injury of Marine vet Scott Olsen. According to the occupation’s website, the strike passed after around 1,600 people voted during the GA. Since then, the general strike has been endorsed to various degrees by teacher’s associations in Berkeley and Oakland, and SEIU Local 1021, among others.

Perhaps the most intriguing response to the strike comes from the Oakland Police in an open letter to the people of Oakland. The Oakland Police Officers’ Association (OPOA) letter expresses frustration with the Mayor’s office for ordering the eviction last Tuesday, then allowing the occupation back in the next day.

The letter pointed out that the reversal meant that the $1,000,000 police operation served no purpose at all — except spawning an investigation of OPD, as well as making Oakland the object of national and international criticism. The Association also notes that the city is giving most city employees the day off to support the strike, while requiring all of the PD to work that day, ostensibly to police the march. In addition to being confused, the police are obviously angry at Mayor Quan and feel that they are being blamed for her office’s political mistakes. How this plays out for tomorrow’s general strike is unpredictable.

Meanwhile, evictions and actions continue around the country. Police cleared the Occupy Richmond in Virginia with bulldozers and dump trucks, resulting in nine arrests on Monday morning. One of the occupiers gave a detailed first person account of negotiating with police to remove camp materials before the trucks were brought in.

On Saturday, police arrested 15 Occupy Denver protestors, and used pepper balls and mace on the crowd in response to occupiers setting up tents in the state capitol/civic center area of Denver. Snow and subzero temperatures are already hitting Denver, but the occupiers have promised to stay despite the weather.

In Tennessee, police began arresting Occupy Nashville protesters on Thursday last week, only to see them return every day to be arrested again. Now the ACLU has obtained a restraining order against police, forbidding them to keep arresting Occupy Nashville participants who defy the recently created curfew on Legislative Plaza in Nashville. The judge called the curfew a “clear prior restraint on free speech rights,” putting the act of occupying on well-tested First Amendment grounds.

To date, all occupations have returned after eviction, generally holding a General Assembly within 24 hours.

The #occupywallstreet movement as a whole has gotten behind the idea of “Bank Transfer Day,” which calls for people to close their accounts at for-profit commercial banks and transfer to credit unions by November 5th, Guy Fawkes day.  Now one credit union, Trumark, is capitalizing on the action, offering transfer customers a $50 gift certificate if they open their account by Saturday. They’ve gone so far as to put the iconic Guy Fawkes mask on their front page.