Staring Down a Rogue Bus: An Introduction to ‘Crowd Control’ 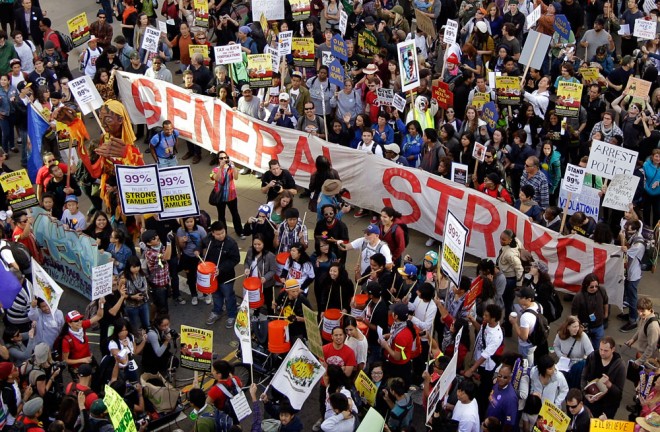 On Wednesday afternoon, as my wife and son and I were walking to Occupy Oakland, we saw a bicycle get hit by a bus. The biker wasn’t hit hard, and he didn’t seem hurt.

But we stopped to help him out, in part because the same bus had borne down on us, too, while we’d been walking through the crosswalk. It was one of those classic muscle plays by a driver, intimidating pedestrians and bikes into yielding the right of way. After he hit the bike, the driver tried to pull away — we had to stand in front, the biker and I, to keep him from fleeing the scene. The biker called the police but they never showed.

It became an uncomfortable stalemate. But there was no question about our course of action. We were standing in front of that bus. We weren’t going to let it leave.

Soon, some Occupy protesters intervened — on behalf of the bus. Turns out, the bus was headed to shuttle activists to the port. It was the last in a convoy of charter buses, and none would leave until all the rest could follow, including this one. Eventually, the protesters convinced the biker to let the bus go. He and I had been a crowd of two; but when our crowd got bigger, the perspective changed, and a different group identity formed.

For a feature story in Wired’s January 2012 issue, I’ve spent the past few months thinking about the nature of physical crowds in the digital age. In this series of posts, called “Crowd Control,” I’ll be semi-regularly posting some of my research and observations. Surveying social science on the subject, most of the interesting questions boil down, fundamentally, to this one: *Who* do we become, collectively, when we come together?

As my own, modest example shows, these questions are fundamentally about identity — who (in the moment) is “us,” and what do we think is right? The constantly shifting nature of this question is a large part of why crowd events are hard to understand, and even hard to describe.

Think about that Wednesday in Oakland. In the afternoon, a giant, peaceful crowd of people — including my family and me — marched from downtown Oakland to the city’s port. The mood was relaxed, convivial, almost carnivalesque.