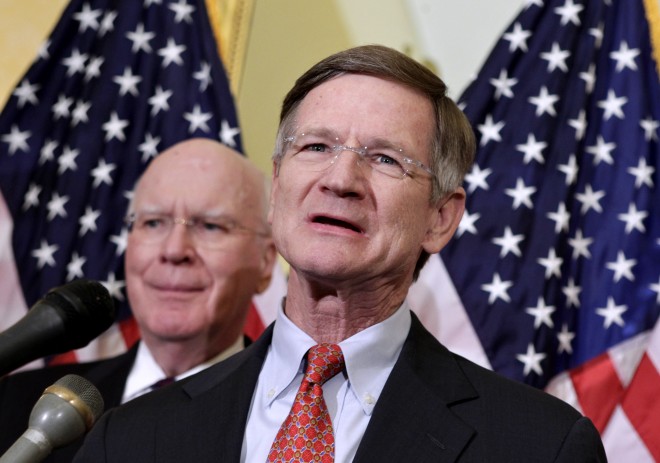 The House Judiciary Committee debated the controversial Stop Online Piracy Act for hours Thursday — and despite protracted criticism of the bill from the nation’s leading internet engineers and companies, lawmakers repeatedly rejected attempts to water-down the bill.

About five hours into the 11-hour hearing, the committee voted 22-12 to reject an amendment that would do away with the bill’s most controversial provision that lets the Attorney General order changes to core internet infrastructure in order to stop copyright infringement.

Despite that vote, members on both sides of the political aisle also expressed reservations that the internet-blacklisting legislation was moving too fast.

“I would just ask: Why is there this rush?” Rep. Dan Lungren (R-California) said. He mentioned there were exigent circumstances when lawmakers approved the Patriot Act weeks after 9/11, but none existed here. “For the life of me, I can’t understand it.”

Rep. Zoe Lofgren (D-California) had similar thoughts, and added that the measure went too far. “We never tried to filter the telephone networks to block illegal content on the telephone network, yet that is precisely what this legislation would do relative to the internet.”

The legislation’s most vocal backers are the recording and movie studios, who say online piracy is killing their business. The measure’s detractors are civil liberties groups and internet architects who say the bill amounts to censorship and a fundamental alteration of the internet itself.

At the outset Thursday, lawmakers demanded that the entire 70-plus-page bill be read into the record. It took a House clerk an hour to read Rep. Lamar Smith’s SOPA bill, which is an amended version of legislation he introduced last month.

“While the internet should be free, it should not be lawless,” Smith, the committee’s chairman from Texas, said.

The measure effectively grants private companies the ability to de-fund websites they allege to be trafficking in unauthorized copyright and trademark goods. The latest version requires a judge’s signature to order ad networks and banks to stop doing business with a site “dedicated” to infringing activities.

What’s more, SOPA originally required ISPs to alter records in the net’s system for looking up website names, known as DNS, so that users couldn’t navigate to the site. Under Smith’s amendment, ISPs would not be required to introduce false information into DNS at the urging of the Justice Department, but they would be mandated to employ some method to prevent American citizens from visiting infringing sites. ISPs, could, for instance, adopt tactics used by the Great Chinese Firewall to sniff for traffic going to a blacklisted site and simply block it.

Rep. Darrell Issa (R-California) urged panelists to remove the DNS and firewall aspects of the bill.

Rep. Mel Watt (D-North Carolina) said he was not a technological “nerd,” but said he did not “believe” security experts who said that the internet would become less secure unless Issa’s amendment was adopted. “I’m not a person to argue about the technology of this,” Watt said before he voted against the amendment. Issa’s amendment failed 22-12.

Stewart Baker, the former policy director of the Department of Homeland Security, said in a paper that he believed SOPA was dangerous, as do some of the internet’s founders.

“The US government has regularly claimed that it supports a free and open internet, both domestically and abroad. We cannot have a free and open Internet unless its naming and routing systems sit above the political concerns and objectives of any one government or industry,” wrote 83 prominent internet engineers, including Vint Cert, John Gilmore and L. Jean Camp.

At last month’s hearing on the bill and on Thursday’s, not one technical expert was called to testify. Many lawmakers urged Smith to continue the hearing to enable the committee to hold another hearing with technical experts. Smith declined.

No vote was taken on whether to send the measure to the House floor as lawmakers debated for nearly 12 hours a host of amendments. Rep. Jared Polis (D-Colorado) proposed a measure that the pornography industry would not enjoy the Justice Department protections of the measure. He said the Justice Department “should protect pornographers last.” That amendment failed, with nine members favoring and 18 against.

“It’s going to be a long day tomorrow,” he said.

Earlier in the day, lawmakers also defeated an amendment that would have excluded universities and research institutions from having to blacklist sites. So that means those institutions would be included in Justice Department orders demanding Internet Service Providers like AT&T and Comcast to block their customers from visiting infringing sites.

The legislation also gives legal immunity to financial institutions and ad networks that choose to boycott “rogue” sites even without having been ordered to do so.

Smith’s measure, as amended, also clarifies that sites ending in .com, .org and .net are not covered by the bill. Only foreign sites fall under the revised SOPA’s wrath.