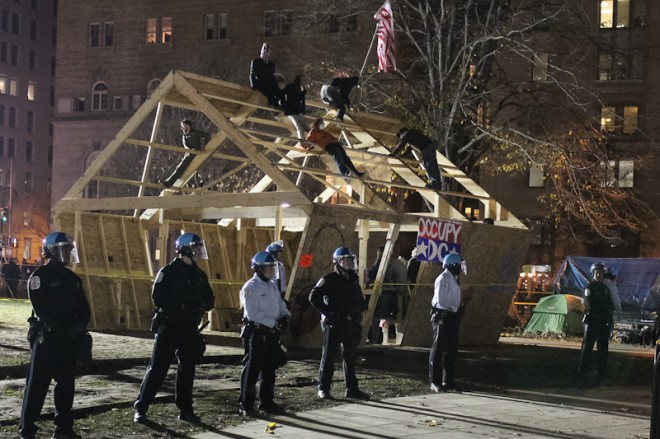 Occupy D.C. protestors hold the fort on Sunday night. Several men held the roof, while a larger group of men and women stayed inside on the ground level.

It bent, to the breaking point, the definition of “temporary structures” that are allowed in the park by the National Park Service Police.

Occupiers had been hiding parts of the building in tents for several days. Around 12:00 a.m. Sunday morning, Wired.com witnessed the rest arriving in giant sections on a flatbed trailer, pulled by a pickup truck. Think modular home, with a sense of urgency.

After two and a half hours marked by frequent glances for cops, about 50 occupiers had nailed and screwed together the modules — made of two-by-fours and particleboard — and hoisted them up, Amish-barn-raising style. 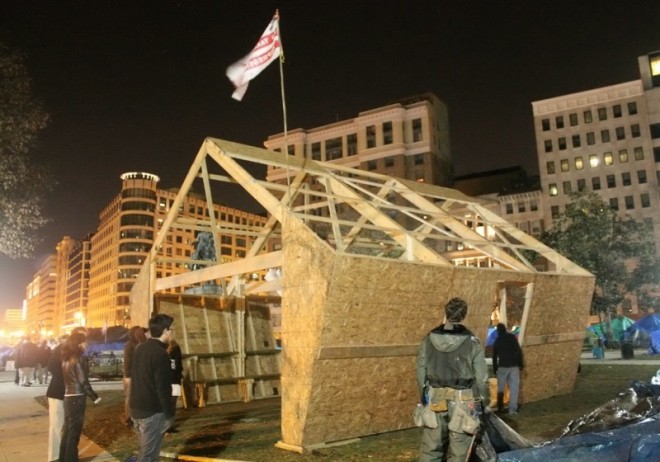 The People's Pentagon went up in the wee hours of Sunday morning when National Park Service police were not around to see it.

“And if the cops say ‘Take it down,’ we’ll say, ‘No, you guys try,” declared the designer, an architect who went by only the name Paul.

“If they want to take it down, they’re going to have to hire a wrecking crew,” said David Givens, an occupier who had helped build the structure.

Naturally, the cops obliged less than a day later, but only after a 12-hour media stunt that ended with police on ladders and in a cherry picker wrestling Givens off the roof. Coming just before a week of national protests in the capital, the mini-drama both revived D.C.’s Occupy momentum and revealed its fissures.

Unlike nearly all occupations, D.C. until Sunday had essentially no legal friction –- no scuffles, pepper spraying or arrests –- and hence very little attention.

The National Park Police has issued a four-month permit (through February 2012) for a well-behaved, even scholarly, encampment on Freedom Plaza along Pennsylvania Avenue. And the agency has stretched its own rules for overnight vigils to allow indefinite settlement by a rowdier, mostly younger crew at McPherson Square along the lobbyist lane of K Street.

Known as the People’s Pentagon, #peoplespavilion or simply ‘the barn’, the popup building was a feat of structural, symbolic and media engineering. 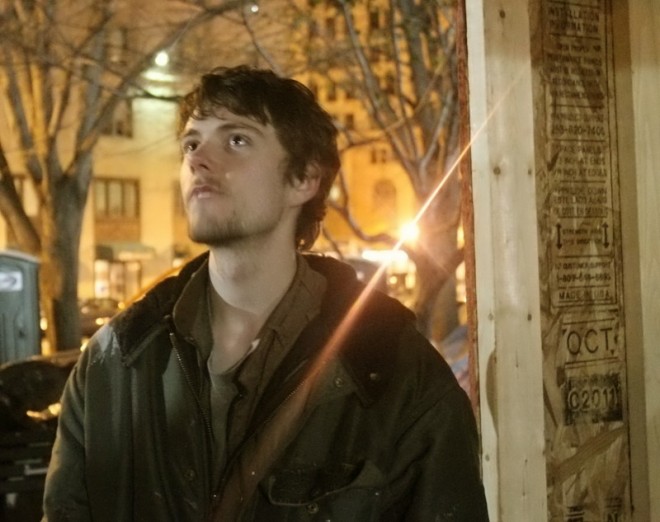 Paul, the architect of the barn, surveying his creation.

It consisted of three segments, each 24 feet wide, 17 feet high and eight feet deep (a fourth section never made it). Viewed head-on, the building had the shape of a pentagon — as if the Pentagon had been turned on its side. Yes, that was symbolic, said a man known as Solo, another of the 31 people who were later arrested.

But it goes deeper, said Paul, who plans to feature the project in a future lecture on “axes of power.” Buildings in D.C., such as the White House and the Capitol, are aligned to represent political power relationships, he said. A barn in a park “stands in defiance of this axial power structure,” said Paul, who stayed far from the building the next day.

It also defies the power structure at occupied McPherson Square by seeing how far the occupiers could push the National Park Service Police.

But before that could happen, some occupiers defied the military by mounting an American flag upside down right before two Marines walked through the park. One of the Marines –- tall, especially clean-cut, and rather drunk -– was beside himself.

“When people fly a flag like that, it offends a lot of fucking people,” he said. “Did any of your buddies lose his legs in Afghanistan?”

A middle-aged occupier with curly hair pulled into a ponytail said that his fellow soldiers had died in Iraq. Another occupier, who goes by Michael, had been an Army interrogator in Iraq. After alternating between discussion and argument with the Marine and negotiating with the other occupiers, the Iraq vets finally got the flag down.

They folded it reverently and handed it to the sober Marine, who’d been trying to coax his friend out of the park for a while.

“I just gained a level of respect for you guys,” he said.

But it wasn’t a perfect resolution.

“People under the guise of the American flag disrespect others around the world,” a woman said angrily to the drunken vet. The fellow Marine steered him out of the park before the argument got much worse.

Wired was back in the park at 10 a.m. Sunday when a police officer finally discovered the barn, providing the mellow camp with a mind-focusing crisis. Facing a one-hour demolition ultimatum, they gathered in the condemned building for an emergency general assembly, to decide if they would take the barn down or fight for it (until the police take it down).

“If you want to be their bitch, grab a hammer,” said one woman.

Others warned that police might close down the whole camp.

“Just keep in mind that some of us are homeless, like homeless for real,” said another woman.

Mike, the young Iraq vet, chose the barn as his Alamo.

“If the cops have an alternative solution to housing thousands of people on the streets, let them join stack,” he said, referring to the roster of speakers at a GA. Otherwise, he would defy them. (See video below.)

Also on stack was a man wearing a goalie mask. When his turn came, he started chanting, “We are the 99 percent!” and climbed up into the rafters. Ultimately, he set the course.

Giving an ultimatum, police cordoned off a wide zone around the barn. The first arrests –- about dozen including men and women — came shortly after when people pushed against the line. Police took them down about as gingerly as anyone could wrestle and cuff an individual.

But the barn occupiers remained for hours and hours in a Fellini-esque standoff with the police. The seven men on the roof sang “Bohemian Rhapsody.” Supporters threw bottles of water, packs of cigarettes and bags of Oreos to their compatriots, over the heads of the police.

A woman among the spectators began playing a conga, until a street preacher tried to pontificate over her. “Let her drum!” chanted the crowd. But the preacher was ultimately allowed to read The Sermon on the Mount over the people’s mic.

Not all the occupiers were amused.

“It’s a perch for a bunch of pigeons who want to be on the news,” said James, a stocky guy clad in a leather jacket.

And several were worried about ticking off the cops.

“You can’t have 10 percent talking for everyone,” said a man named Darrell. “We’re being the aggressor here.”

The police brought in floodlights as the sun went down. Local news crews and newspaper reporters crammed up against the police line. The cops gave a quick succession of three final warnings around 5:40 p.m. They slowly took protestors out, first about 10 from inside the barn, included several women, and then the seven men on the roof. 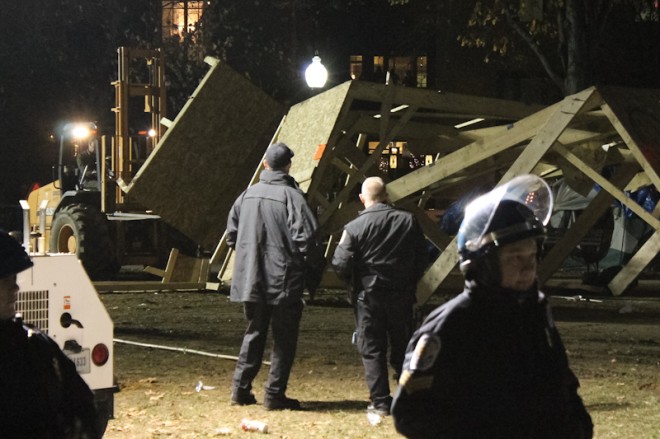 The People's Pentagon lasted not long after police removed the protestors.

Some dove gleefully into a giant air mattress the police had set up. Others offered various amounts of struggle. The last, David Givens, kept wrapping himself around beams and rafters for about 10 minutes before police wrested him down a ladder.

Most of the arrestees were out a few hours later, including roof-sitter Benjamin, a bearded, horned-rim hipster who’s often the comedian of the crew. Asked if he was pleased, he grinned and said, “I think it’s a great idea. The media attention we got was astounding.”

And it came right before a string of occupy protests that start in D.C. on Tuesday.

“It’s going to resonate around the country now that we are the mecca of the occupation,” he said.