Manning Hearing Moves Forward Under a Cloud of Questions 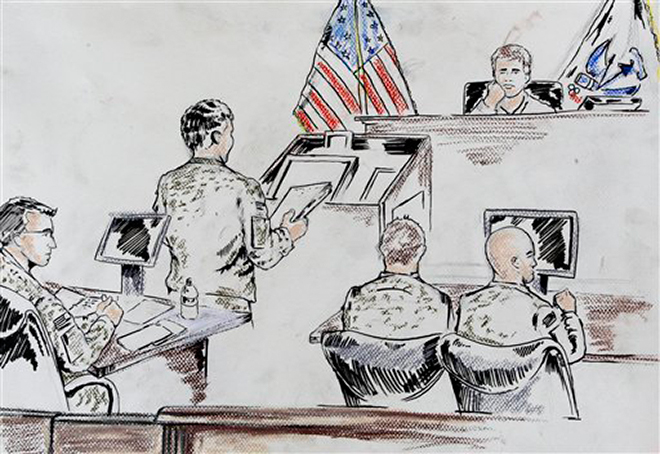 FORT MEADE, MARYLAND. — The first day of Bradley Manning’s hearing ended Friday with no witnesses called and no final determination about the fitness of the officer presiding over the case.

The proceedings broke early at about 4 p.m. after investigating officer Lt. Col. Paul Almanza, an Army reservist, refused to grant a defense motion calling for his recusal. Manning’s attorney, David E. Coombs, had requested that Almanza step aside on the grounds that he is biased against Manning and has a conflict of interest in the case — until four days ago, Almanza worked for the Department of Justice. He’s currently on reservist military leave from the Justice Department in order to preside over the Manning hearing.

Attorneys assisting Coombs responded to Almanza’s refusal by filing a so-called “extraordinary writ” with the Army Court of Criminal Appeals asking for an order halting the proceedings while Almanza’s recusal decision can be examined by a higher authority.

There was no ruling on the emergency motion as of the end of the day, and the case is set to continue at 10 a.m. Saturday — Manning’s 24th birthday — with the government calling its first witness.

The first day of the so-called Article 32 hearing proceeded in stops and starts as the court broke for several recesses, first to allow the government to develop a response to Coomb’s motion to recuse, and then to allow Almanza time to consider the arguments for and against his recusal.

A legal expert provided to reporters by the Army on condition he not be named remarked on the unusual day, saying that a writ to recuse filed in connection to an Article 32 hearing is “something that happens on occasion, but is not something that you see often.”

Adrian Lamo, the ex-hacker who turned in Manning in May of last year, took to Twitter to offer his own opinion on the day’s events. “To ask a judicial official to step down because his day job is to prosecute is not a display of confidence for the defense,” he wrote. Lamo is expected to be a government witness in the hearing in the days ahead, where he’ll face cross-examination by Coombs.

Coombs’ challenging actions on Friday, which turned contentious at a couple of points during the proceeding, were likely meant to put the investigating officer on notice that he will be closely watched for impartiality should he remain in place, as well as establish some possible grounds for later appeal if Almanza remains on the case.

Manning sat calmly throughout the proceedings, conferring occasionally with his counsel. He appeared to be healthy, as well as confident in the legal representation he was receiving.

Coombs’ attack on the military equivalent of a sitting judge clearly took prosecutors by surprise, and gave the defense attorney the initiative in the first day of the high-stakes hearing. But Manning’s road ahead is still long and arduous.

If the case is cleared for court martial, Manning can propose a plea agreement anytime before the actual court martial, according to the legal expert, who said that such a plea must be initiated by the defense, not the government.

If Manning does not plead guilty and a determination of guilt is ultimately made by the court, he still has the ability to appeal, first to the Army Court of Criminal Appeals, then to the Court of Appeals for the Armed Forces and finally to the Supreme Court.

Manning’s hearing is expected to continue throughout the weekend and into next week, unless the Appeals court orders a stay. Wired.com will be providing gavel to gavel coverage.