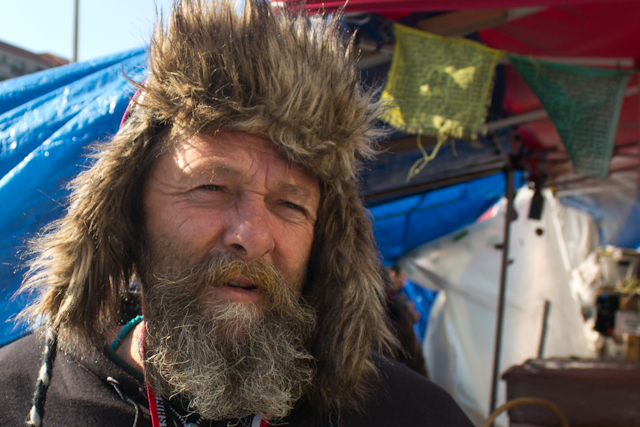 WASHINGTON — “If this is the revolution, this is our Valley Forge,” said a doughy, middle-aged man with frazzled long brown hair.

I was shivering when we spoke at 7:30 a.m. Thursday morning — as I had been shivering for the seven previous hours. Arriving about midnight on Wednesday, I’d missed the day of cold rain that had left the Occupy DC camp somewhere between damp and drenched. Without a sleeping bag or pad (both lost in a police action a few days earlier) and in 35-degree weather, I settled into a soggy upholstered chair under a mostly dry blanket. The loose weave welcomed the wind that whipped through our flimsy yurt on the barren granite and marble of Freedom Plaza along Pennsylvania Avenue.

A fellow camper, whose tent had collapsed in the rain, was wandering the plaza in only a hospital gown and blanket that morning. He’d just returned from emergency treatment for hypothermia, and all his clothes were still wet. Scott, a volunteer from southern Maryland who describes himself as an outdoorsman, had gotten the man on a bus to the hospital the night before and also tended another man in the early stages of hypothermia.

“Last night was only a mild case of what they have coming,” Scott said. “I don’t think a lot of people are prepared to be in the elements.” Scott would know. He spends nearly every night, every season (except during rain) in a hammock outside his parents’ house. (Like many people at the camp, he lives with family and describes himself as “disabled.”)

Whether the National Park Service intends to or not, it’s refusal to try to evict the protestors is calling the Occupiers’ bluff that they will survive the winter and indefinitely beyond. The fate of the DC occupations — it has two, not always amicable, camps — is growing more important as they attract a diaspora from cleared encampments around the country.

And the situation is growing crucial as many earnest, but unfocused, activists try to get their shit together. A general assembly can dicker and drift about visions and policy goals. But, it can’t space out on winter survival.