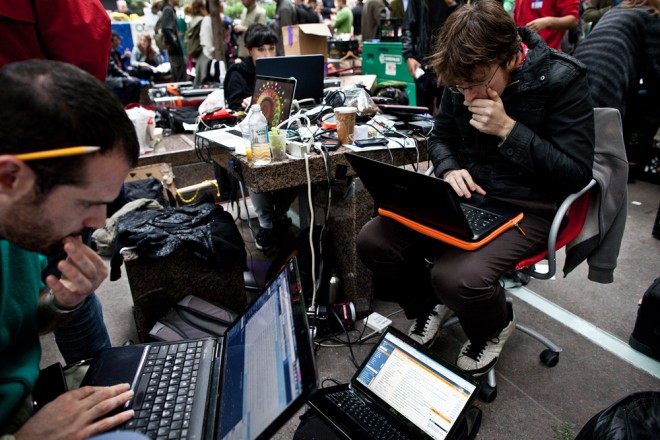 Protesters volunteering for the internet and information boards of the Occupy Wall Street protest work and broadcast from their media center in Zuccotti Plaza on Oct. 2, 2011. Photo: Bryan Derballa for Wired.com

They hope the technology they are developing can go well beyond Occupy Wall Street to help establish more distributed social networks, better online business collaboration and perhaps even add to the long-dreamed-of semantic web — an internet made not of messy text, but one unified by underlying meta-data that computers can easily parse.

The impetus is understandable. Social media helped pull together protesters around the globe in 2010 and 2011. Egyptian dictator Hosni Mubarak so feared Twitter and Facebook that he shut down Egypt’s internet service. A YouTube video posted in the name of Anonymous propelled Occupy Wall Street from an insider meme to national news. And top-trending Twitter hashtags turned Occupy from a ho-hum rally on Sept. 17 into a national and even international movement.

Now it’s time for activists to move beyond other people’s social networks and build their own, according to Knutson.

“We don’t want to trust Facebook with private messages among activists,” he said.

The same thinking applies to Twitter and other social networks — and the reasoning became clear last week, when a Massachusetts district attorney subpoenaed Twitter for information about the account @OccupyBoston and other accounts connected to the Boston movement. (To its credit, Twitter has a policy of giving users the opportunity to contest such orders when possible.)

“Those networks will be perfectly fine — until they are not. And it will be a one-day-to-the-next thing,” said Sam Boyer, an activist turned web developer, turned activist again, who works with the New York City occupation’s tech team.