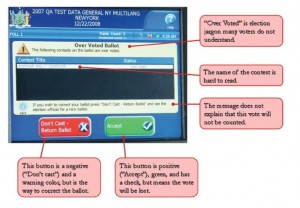 The confusing screen that voters in New York were shown last year when optical scan machines determined they had cast too many votes in a race. Courtesy of Brennan Center for Justice

About 60,000 e-votes went uncounted in New York state elections last year and may be due to poor design of optical scan machines, according to a report released Tuesday.

The same flaw could lead to a loss of 100,000 votes in the presidential election next year, the group warns, if the problem isn’t fixed.

The report (.pdf), released by the Democracy Program at New York University’s Brennan Center for Justice, says that instructions displayed on new optical scan machines confused voters who cast too many votes in the gubernatorial race, causing some 20,000 votes to be spoiled in that race. An estimated 30,000 to 40,000 votes were also lost in other races due to the same problem.

Overvotes were about .04 percent of the more than 2.4 million votes that were cast in the 34 counties that provided overvote data to the Center. Another 28 counties failed to provide data, but the Center, extrapolating numbers from the data that was provided, concluded that about 60,000 overvotes occurred in the state in total.

With voter turnout expected to double in the presidential elections next year, the report says the number of lost votes will likely double as well — which could sway an election.

The problem occurred with voters who chose more than one candidate in a race, called “overvoting.”

Overvoting is generally unintentional on the part of a voter, caused when voters don’t read instructions carefully or change their mind and inadequately cross out or erase one selection to choose a different candidate. Poorly calibrated optical-scan readers can also be a problem if they read stray marks or smudges on a ballot as an actual vote.