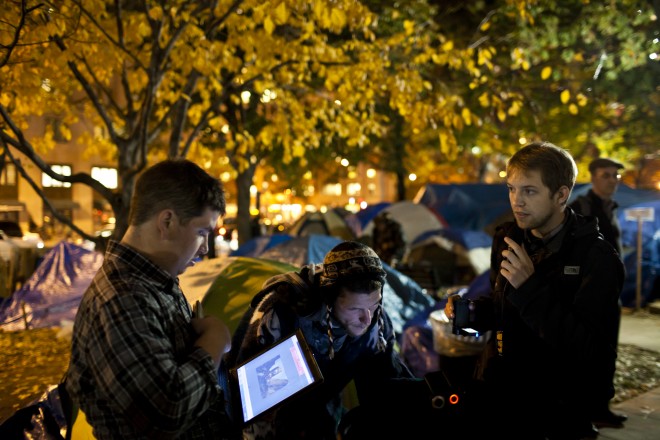 When Sascha Meinrath saw the Occupy encampment in D.C., he saw something few others would — a testbed for technology.

Meinrath has been chasing a dream for more than a decade, ever since he was a liberal arts grad student in Urbana, Illinois: community wireless networks. From that small beginning, Meinrath now runs a State Department-funded initiative to create an Internet in a Suitcase — the Voice of America of the digital age.

If he has his way, Meinrath’s project will lead to low-cost, easy-to-use wireless connections around the globe, all lashed together in mesh that can withstand the whims of dictators willing to pull the plug on the internet to quash dissent. He and a team of software engineers are developing open-source software to turn cheap wireless access points and Android smartphones into nodes on the network, which could then be used by dissidents to evade censorship and to spread low-cost connections everywhere around the world. Proponents of the plan include the U.S. State Department, which has given Meinrath a $2 million grant to develop the code.

“This started due to massive naiveté,” said Meinrath, whose official title is Director of the New America Foundation’s Open Technology Initiative. “I had no idea of the complexity of solving these problems.”

Before getting funding, Meinrath and his team of collaborators had been building various community networks for years, including a post-Katrina emergency connection network that spanned three states. Community wireless networks in the U.S. have generally failed to find acceptance, but massive scale networks are possible, says Meinrath, pointing to examples in Spain and Greece which are home to networks with thousands of nodes.

With the emergence of an Occupy encampment in the nation’s capital, Meinrath found a nearly perfect testbed for the pre-alpha software — the site is weather-challenged, and full of internet-hungry individuals constantly trying to update social networking sites and make their own media. Exactly like what happened in the Arab Spring.