WikiLeaks Unveils the Selling of Surveillance, Sort Of 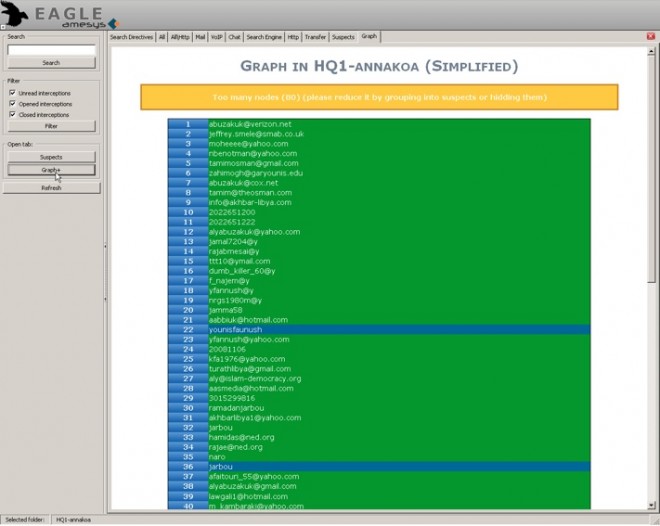 Screenshot from the Amesys manual showing targets who were apparently under surveillance.

The WikiLeaks submission system may still be incommunicado, but the secret-spilling site woke up on Thursday to release a trove of marketing documents from surveillance companies hawking their wares to governments — though many were previously published by the Wall Street Journal or were already publicly available on the web.

The site published 287 documents that it says are part of a larger cache of hundreds of such documents that reveal price lists, manuals and marketing claims from companies like Blue Coat, whose spying technology is being used by Syria, as well as Nokia-Siemens, Lucent and other large technology firms that have been criticized in the past for selling their wares to oppressive regimes.

The documents so far are getting mixed reviews from critics who point out that the Wall Street Journal published more than 200 of the marketing documents last month in an exposé focused on shining a light on the vast global market for off-the-shelf surveillance products.

The most salient leak in the WikiLeaks cache so far appears to be one discovered by WikiLeaks’ French media partner OWNI, which uncovered a screenshot from a manual created by the French surveillance firm Amesys that shows the e-mail addresses and online pseudonyms of at least 40 people — poets, journalists, writers, historians and intellectuals — who played key roles among Libya’s opposition groups and were evidently being spied on with Amesys technology.

Until recently, seven of them were still living in exile: four in the UK, two in the US, one in Helsinki. Last August, one of them was appointed the Libyan ambassador in London. Another was one of 15 founding members of the National Transitional Council (NTC), created in March 2011 to coordinate the insurgency in Libya. He has since been appointed Minister for Culture.

While they were living in Britain and the United States, the electronic correspondence of all these figures was spied on by the extensive monitoring systems of Amesys, a French electronic warfare arms dealer which forms part of the Bull group.

That doesn’t explain, however, how the names of Libyan activists ended up in a user’s manual for its spying software.

The documents are searchable on the WikiLeaks site by company name, product name and technology type — such as GPS trackers, video surveillance and internet traffic monitoring.