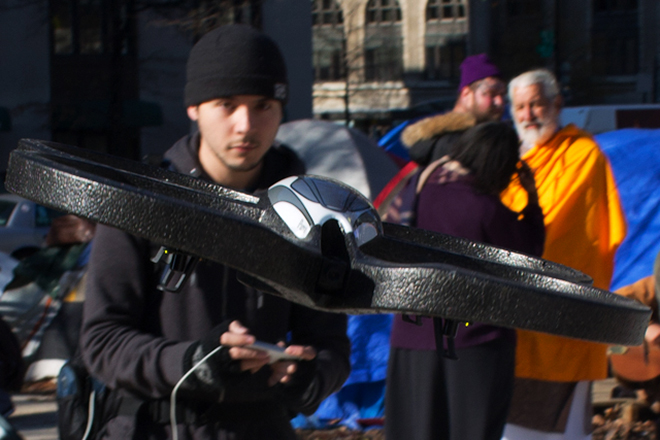 But the blogger is 25-year-old Tim Pool — an internationally known journalist who attracts tens of thousands of viewers to his live-stream broadcasts from Occupy Wall Street protests in New York, DC, LA and other cities. (His feeds and archival footage are also aired on mainstream networks such as NBC.) He and his partners hope that the toy chopper — the $300 Parrot AR Drone — will be one step toward a citizen-driven alternative to mainstream news.

Along with “general assembly” and “99 percenters,” Occupy Wall Street has brought the phrase “livestreaming” to the forefront. Rising-star reporters — known best by their Twitter and Ustream handles — such as Pool (timcast) in New York City and Spencer Mills (oakfosho) in Oakland are passionate, deeply embedded correspondents who provide live video reporting — sometimes lasting a dozen hours or more — of protests, general assemblies and other Occupy events. Instead of using a satellite truck, they broadcast live “TV” coverage from 3G- and 4G-equipped smartphones over video networks such as Ustream.com and Livestream.com.

They are real-life embodiments of Jimmy Burns, of Anthony Lappé and Dan Goldman’s 2006 online graphic novel The Shooting War about a video blogger made famous for being first to cover a major news event (a terrorist attack at a Brooklyn Starbucks).

Having thoroughly figured out how to cover giant events from ground level, they are now exploring ultra-cheap alternatives to the hundreds-of-thousands-of-dollar news choppers used for aerial reporting of big events like protest marches and police clashes. In the process, the video bloggers are discovering both how far low-cost consumer technology has come and how much farther it needs to go.

Like the HD video cameras now included in the livestreamers’ cellphones, aerial surveillance drones have progressed from ultra-expensive professional gear to impulse-buy items. What was once in the Pentagon budget is now at Toys “R” Us – in a simple form, at least.

“The AR Drone is the first toy that came out,” said Sam Shapiro, a 24-year-old programmer from Brooklyn who’s helping Pool hack together an airborne news network.

While he supports their aims, Shapiro says that he doesn’t identify with the Occupy protesters. He does, however, want to use technology to keep them safe.

“The way I got involved in this originally is from watching the Brooklyn Bridge,” he said, referring to the October 1 march and arrests of more than 700 Occupy demonstrators on the iconic span. “While I can’t be involved in stuff like that, I don’t want to see my friends being beaten up because they don’t have tactical knowledge of what’s going on.”

He started, but didn’t finish, building a website that pulls together the live feeds from traffic cameras that New York City makes available to the public.”It kind of turned from that to how do you expand the coverage, how do you get cameras all over the place, how to allow people to pull this off so they can be predictive of what’s going on instead of responsive to it,” he said. 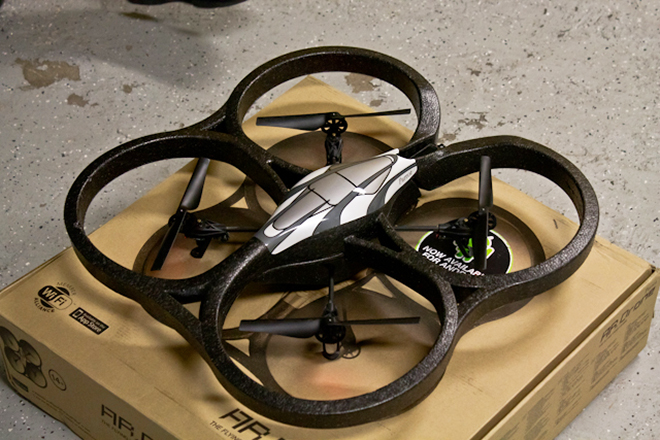 This $300 AR Drone is sold as a toy, but it's also hackable. Photo: Sean Captain

Like Pool, Shapiro saw the AR Drone as a good start for aerial surveillance. Each came to the same conclusion on his own, and they met when Pool posted a request on Twitter asking for help building a Web site.

Introduced in 2010, the one-pound styrofoam craft has four rotors and a plethora of sensors to keep it stable and navigable. In some ways, it resembles an iPhone, with accelerometers and a gyroscope to measure movement and location, for example. Parrot says that it can fly 50 feet high, up to 11 miles per hour and stay aloft for about 12 minutes on a charge.

Built-in Wi-Fi allows control from an iPhone or Android phone. The Wi-Fi also beams back moderate-resolution (640-by-480-pixel) video to the phone.

But the point of live-stream journalism is to broadcast from a smartphone not to it. What Pool and Shapiro thought would be a little software fix for that – using the company’s laptop software and a screen-capture program – turned into a nightmare.

In theory, Parrot encourages tinkerers with a software developers kit and sample programs for controlling the copter. But the one for Windows didn’t work at all, said Shapiro. The Linux program could pilot the craft but yielded crappy video. His efforts to fix the program got nowhere. “You need to be an experienced, serious Linux programmer to deal with this in any way, shape or form, and their [tech] support is terrible,” he said. 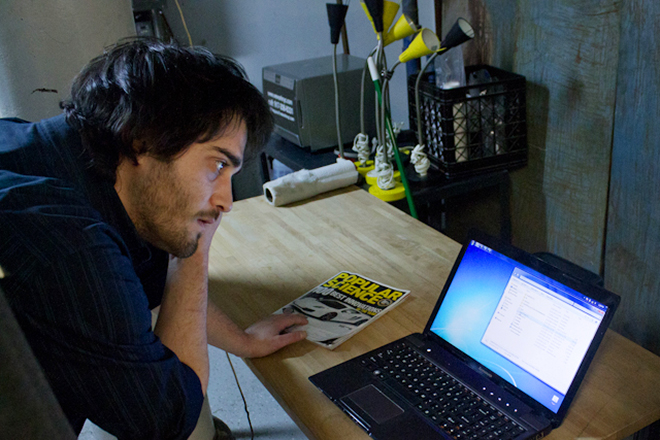 Finally, Shapiro tracked down a European hobbyist group that had written its own software, called Javadrone, from scratch “and did a much better job of it.”

Pool first used the AR Drone, which he’s dubbed the Occucopter, in December to cover a New York City rally for immigrant rights, but he said that the video from that attempt was unusable. He also made a test-run at Occupy Albany. Pool expects his first coverage with the new software and high-quality video will be at the Occupy Congress action on January 17 in Washington, DC.”  A live stream journalist out of California used an Occucopter to shoot on December 19th. (But not without crashing and cussing.)

But the AR Done isn’t in his long-term plans due to its clear limitations. “You need perfect weather. It just doesn’t weigh enough,” said Shapiro.

“I lost one in a tree in Albany. It’s still there,” said Pool. A mild wind nixed an outdoor demonstration for Wired. Instead, Pool and Shapiro flew it around the basement of a New York coworking center where Pool has a tiny office space. (See video.)

Still, the AR Drone is simple for people who aren’t hackers, and it’s cheap. “Right now it’s probably the best bet for the occupations,” said Pool. “They can go out and pick one up at the store, and we can email them the instructions.”

But Pool and Shapiro are already thinking bigger for their projects, and developing better tech to eventually provide to other live stream journalists.

“The most important thing is the zeppelin,” said Pool. Basically a big balloon, it will be able to lift a lot of gear with just a little power for the rotors that steer it. And the slow speed is a benefit: It holds the camera steady and won’t suddenly go out of control.

In fact, they are trying to build copters that work more like zeppelins.

“It doesn’t need to be doing aggressive dogfighting maneuvers,” said Shapiro. “All it needs to do is hover and take a proper picture.” Instead of relying on constant commands from the ground, the zeppelin and copter will dial in periodically for updates.

An example would be: ascend to an altitude of 40 feet, move to specific GPS coordinates, position the camera at a shot angle of 12 degrees down, face northwest, and pan back and forth 30 degrees at 12 degrees per second. It’s more like directing a camera operator than being a flyboy.

That mellow flight pace allows people to easily take turns with the craft –if they want to or if they need to.

“Even if one operator is compromised, another operator can spring right back up,” said Shapiro.

“There can be a chain of command,” added Pool. “People know what their number is. They can even get text alerts.”

In this case, “compromised” means getting nabbed by cops. That may not seem so far-fetched after a January 3 police raid and arrests – on vague charges — at OWS-focused live streaming organization Global Revolution in Brooklyn. 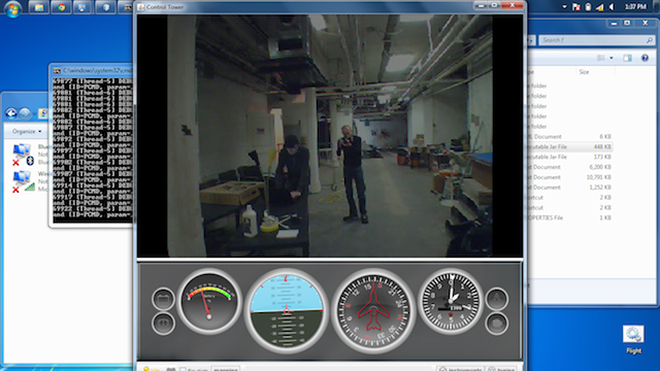 AR Drone can be piloted over WiFi using this 'cockpit' view.

Equipped with a 3G or 4G wireless card, a copter or zeppelin could take commands over the Internet, from anywhere. One idea they have is a Facebook page where approved pilots can send commands to the drones.

“You’d have to take down all of Facebook to take out every operator,” Shapiro said. (It resembles the decentralized security strategy that’s driving a separate project to build an independent, decentralized social network for the occupations.)

But even with small, slow-moving craft, Shapiro and Pool have to deal with the prospect of crashes, which is new, unknown territory for any news organization. Till now, drones have been used over empty disaster areas or in acts of war, where public safety isn’t much of a concern.

“OK, we’re going to be flying over a friendly crowd,” Shapiro said. “What happens if we lose control of it, and the propellers go smashing into the crowd?” Even though a balloon and a styrofoam helicopter are unlikely to be very dangerous, they are a legal liability. And the two men are planning for bigger craft.

Newscorp’s The Daily has been experimenting with Parrot and larger drones, and Shapiro hopes that will resolve some questions. “So they are going to be our legal benchmark for what we can do. They are going to the government to get all these rules locked down for citizen drone usage.”

All their plans for zeppelins and steadycam choppers go well beyond what a toy copter can do. But Pool and Shapiro have been surprised to find many other options.

At the high end is Polish company RoboKopter. Its stunning video of clashing demonstrators in Warsaw in November prompted the New York Times to proclaim “Drone Journalism Arrives.” Shaprio hasn’t gotten pricing from them, but he priced out a similar craft from a company called Draganfly and got a quote close to $30,000.

Pool and Shapiro are instead going with a product called ArduPilot made by DIY Drones. It’s based on the Arduino board – microcontroller that’s a mainstay for robot builders. ArduPilot is a version equipped specifically to control aircraft. They will have to modify the open-source software to support their camera-operator maneuvers. (Full disclosure: Wired Magazine editor in chief Chris Anderson is the co-founder of DIY Drones.) 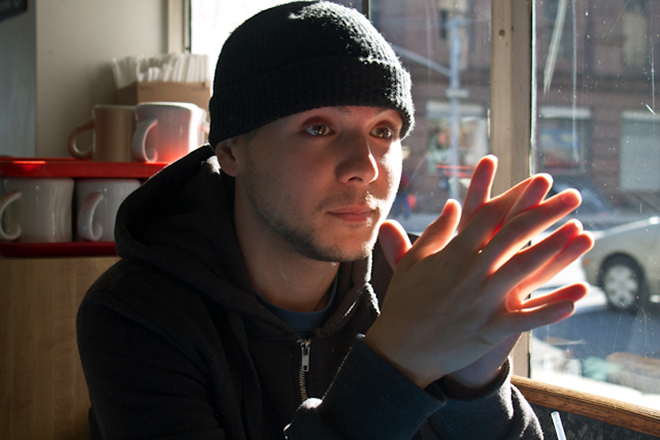 Tim Pool, who has thousands of followers when he's livestreaming Occupy protests, has big plans to take over the skies. Photo: Sean Captain

Pool and Shapiro are using ArduPilot to build both an Occu-Eye zeppelin and a next-gen Occucopter that they hope to have aloft in about six weeks. The cost for two high-end models will be close to $2,000 – too much for most citizen journalists, but doable for Pool. Just during his live streaming of the Occupy Wall Street New Years protests, he picked up $1,990 in donations from viewers.

They also aim to “mass-produce” cheaper versions for about $350 that they will sell to citizen journalists at cost and help them setup and maintain. (It will be part of an entire kit for aerial and on-foot reporting that will cost about $600.)

Pool is already thinking well beyond that. “We want to start playing with EEG controllers,” he said. “They sell them in children’s stores.” He meant the $60 Mattel Mindflex, which uses a simple headset to roughly measure the level of brain activity. By concentrating, kids control a fan that keeps a plastic ball suspended in the air.

“There’s no reason we can’t translate up and down of the ball to up and down of the drone,” he said. Considering all the projects that a toy helicopter has kicked off for them, maybe a mind-controlled aircraft, a la Clint Eastwood’s 1980s flick Firefox, isn’t so far fetched.