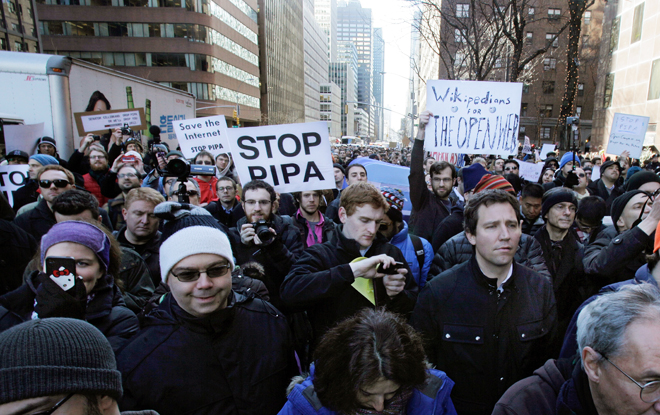 The House version of the Stop Online Piracy Act, the proposed anti-piracy legislation that drew a planned and widespread internet revolt Wednesday, is likely to undergo a radical overhaul to muster passage.

The measure, along with the Senate’s proposed Protect IP Act, faces an uncertain future given newfound widespread legislative opposition to the proposals in their current form. On Wednesday, as thousands of websites blacked themselves out or altered their appearance in protest, Republican and Democratic lawmakers in both the Senate and House began distancing themselves from the non-partisan bills they had once supported.

Nowhere was that more apparent than in the House Judiciary Committee, which is headed by Rep. Lamar Smith (R-Texas), the chief SOPA sponsor.

Committee spokesman Brett Bettesworth said in a telephone interview Thursday that, when Smith brings SOPA up for a vote next month, he will have removed the most controversial provision that prompted the backlash. And Smith will be open for even more amendments, he said.

“He realizes there is going to have to be a lot of changes because of the opposition there has been to it,” Bettesworth said.

But it’s too soon to say what else might be amended in either SOPA or PIPA, given that the Senate and House must send the president the same versions. Yet the chorus of lawmakers who now say they oppose the measures have not publicly itemized their objections.

Meanwhile, Senate Major Leader Harry Reid’s office did not respond to inquiries Thursday on whether the Nevada lawmaker next week would bring PIPA to a procedural floor vote, the first step toward breaking a rarely used hold on the measure imposed by Sen. Ron Wyden (D-Oregon). That would require 60 votes. Given the rapid backpedaling in D.C. in the last week, Reid – a big supporter of the bill and a big recipient of donations from Hollywood, may no longer have the votes needed to overcome Wyden’s hold.

Here are some of the remaining controversial provisions in both bills that could be up for amendment:

*The bills give the Justice Department the power to seek court orders requiring search engines like Google not to render search results for infringing websites. Politco reports that removing that provision in PIPA is being discussed privately.

*The bills also allow the Justice Department to order internet service providers like Comcast and AT&T to block their users from visiting blacklisted sites. That would be unprecedented in the United States, though it’s a common tactic used in countries like Syria, Iran and China to clamp down on political dissent and adult content.

*The SOPA proposal bars the distribution of tools and services designed to get around such blacklists. The ban could arguably cover tools such as VPNs and Tor used by human rights groups, government officials and businesses to protect their communications and evade online spying and filtering.

*The proposals grant rights holders the ability to demand that judges order ad networks and financial institutions to refrain from doing business with sites right holders say are infringing.

*The measures also give out legal immunity to ad networks and financial institutions that choose, without a court order, to stop placing ads or processing transactions for websites they deem are dedicated to infringing activity.

The key provision Smith is removing is one that had mandated DNS redirecting of websites deemed dedicated to infringing activity.

That provision would have required ISPs to prevent Americans from visiting blacklisted sites by altering the system known as DNS that turns site names like Google.com into IP addresses such as 174.35.23.56. Instead, for the blacklisted sites, ISPs would have to lie to their customers and tell their browsers that the site doesn’t exist.

Smith had already said he planned on dropping that part of the bill in response to security experts’ concerns. The same provision in PIPA on the Senate side is also being removed, a promise the chief PIPA sponsor and chairman of the Senate Judiciary Committee, Sen. Patrick Leahy (D-Vermont), made last week.

However, Leahy has not said that the bill will go back to committee for further amendments and discussion, which leaves him the option of just amending it himself (a so-called manager’s amendment) and offering it up as the bill to be voted on.

Complicating matters further, the Justice Department on Thursday seized the domains and bank accounts of Megaupload, a Hong Kong-based file sharing site, shutting down the site and arresting four of its executives overseas. T

he men are accused of criminal conspiracy and copyright violations. The indictment of foreigners for violations of U.S. copyright law promptly led many SOPA critics to wonder why the government needs to mandate internet censorship, if criminal laws can already be used to go after alleged offenders.