2011: The Year Anonymous Took On Cops, Dictators and Existential Dread 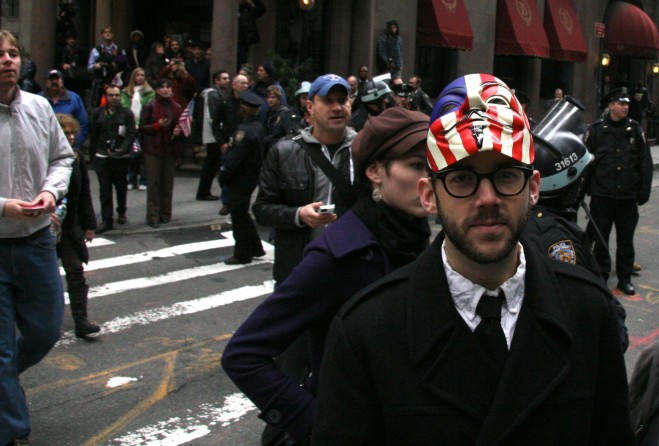 A man at the November 17 OWS protest in New York sports the iconic Guy Fawkes/Anonymous mask in DIY red, white, and blue.

Part Three of a Three-Part Series Examining the History of Anonymous. Part One. Part Two.

“World War III is a guerrilla information war with no division between military and civilian participation.” – Marshall Mcluhan

“They are made of money. We are made of cocks.” — Antisec Anonymous, on targeting law enforcement.

Ever since we learned that people, distances, and dollars could all be counted in millions, then billions, the human struggle has been about consequence: What could anyone do that would matter in such a huge world? And in 2011, having left the self-indulgent identity of 4channers behind, Anonymous faced this existential dilemma.

A single question haunted every video, every news report, every AnonOps channel on IRC: Is what Anonymous does of consequence? It’s not a universal requirement; we don’t require our sports stars and celebrities to be of consequence. Hell, we don’t even require it of our politicians.

But Anonymous had taken up the idea of making a difference in the late 2010 operations. Sure, Anonymous is bombastic, entertaining, sometimes quite clever, sometimes cruel, nearly always vicious, and eternally sophomoric, but will the actions of Anonymous change the world?

As Anonymous, its online watchers and the media evaluated its moves, it became clear through the growing protest movements and collectives of 2011 that the question of consequence wasn’t just about Anonymous.

It was about whether action outside a system that few of us are, or can be, a real part of can affect the world. When we judged Anonymous, we were also judging our own willingness to act outside the confines of normal society. We were judging not only if Anonymous could leave its mark, but whether we could or should.

The question of consequence was, by the end of 2010, hanging in the wings, but it took the fire that sparked the Arab Spring to bring it to center stage. 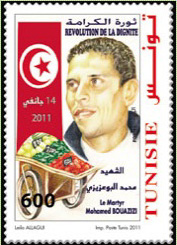 Mohamed Bouazizi was a produce vendor in the provincial town of Sidi Bouzid in Tunisia. He was always meant to be a little person in the world, whose life and death could never matter. You were never meant to hear of him. But for no explicable reason, that changed on Dec. 17, 2010. His produce cart was seized by police, and he was beaten. Less than an hour later, he stood on the street doused in paint thinner, screamed “How do you expect me to make a living?” and let a lit match drop.

Bouazizi was at the end of his ability to endure, silently, the pain and abuse that had been the way life worked. But it turned out so was Tunisia, and the whole Middle East.

Within hours protests against the systemic corruption that had driven Bouazizi to self-immolation filled the streets of Sidi Bouzid, and over the next two weeks spread like fire over Tunisia.

“There were two different posts in channel #operationpayback. First one about some law about to pass in Hungary, second one about a Tunisia problem. For some reason I paid attention to the Tunisian one, and it seems other people did too,” said an anon who participated in OpTunisia. It was a claim that Tunisian dictator Ben Ali was censoring Wikileaks cables related to Tunisia. Rumors emerged about Bouazizi as well, that he was a computer science student (he wasn’t), that he had immolated himself to protest police corruption (he had), and so on.

A few people formed #optunisia on IRC and started talking about what to do. The OpTunisia anon who spoke with Wired.com didn’t think either the op or the revolution had a chance.

“I saw nobody cared about those people, because it wasn’t a big country. It was like, ‘Fuck this is impossible…. Let’s fucking do it!’” the anon wrote in an online chat.

Over the next couple of weeks the small group DDoSed and defaced Tunisian government websites and passed media and news reports about the Tunisian uprising in and out of the country.

“We also distributed a care package containing stuff to workaround privacy (restrictions in Tunisia), including a Greasemonkey script to avoid proxy interception by the Tunisian government on Facebook users,” said the anon. (Greasemonkey scripts are powerful browser plug-ins).

Within that digital care package was a message to the people of Tunisia from Anonymous: “This is *your* revolution. It will neither be Twittered nor televised or [sic] IRC’ed. You *must* hit the streets or you *will* loose [sic] the fight. Always stay safe, once you got [sic] arrested you cannot do anything for yourself or your people. Your government *is* watching you.”

Some of those in the #optunisia channel were Tunisians, including slim404, whose real name was Slim Amamou, an outspoken Tunisian blogger. Amamou and others put themselves at risk by passing news and software back and forth between anons and the outside world and the people on the ground.

Amamou was arrested on Jan. 6, 2011. The anons in #optunisia barely slept. Police were shooting protestors, the government was censoring websites including Facebook, but the news still spread, and the protests only grew. Then, less than a month after Bouazizi’s immolation, 23 years of brutal dictatorship ended with Ben Ali’s flight from Tunisia.

“I remember I woke up like two days later and my house was full of empty bottles of champagne,” said the anon. “But then we started OpEgypt, so no rest.”

Did Anonymous make a difference in Tunisia?

“I think its better to ask Tunisians if they think we helped,” said the anon. “I did whatever I thought I could have done. My little grain of sand.”

Amamou was released from jail and went on to become the secretary of state for sport and youth — perhaps Anonymous’ first minister — though he resigned in May to protest the transitional government’s censorship of the web.

Perhaps we will never know how consequential Anonymous was for Tunisia, but Tunisia changed everything for Anonymous. OpTunisia was the first of what became known as the Freedom Ops, Anonymous operations that mostly started in Middle Eastern countries in support of the Arab Spring, but spread much further.

The next was OpEgypt, where the protests were much bigger, and the situation even more complex.

Right from the beginning of the occupation of Tahrir Square and the Jan. 25 “Day of Revolt”, Anonymous started to set up lifeline internet connections and target government servers to DDoS just as they had in Tunisia.

Three days later, Mubarak turned off the internet. Anonymous was aghast, both at this display of existential threat to the net as a way of political expression, and to their impotence in the case of a nation just taken offline.

But Mubarak fell on Feb. 11, not having lasted much longer than Ben Ali. Once again anons found they liked the sense of being part of history. For a few weeks, the pranksters-turned-activists were most known around the world for fighting the good fight beside the people, and they liked it. The Freedom Ops proliferated.

The Freedom Ops are useful in explaining how Anonymous ops work. At any time on IRC there were ops for any number of countries, not just Middle Eastern ones. There were channels for Britain, Italy, Ireland, the USA, Venezuela, Brazil, and many more, as well as Syria, Bahrain, Yemen, Libya, and most of the rest of the Middle East. Most of the ops had few participants, so those who were there linked to a press release or video about problems in that country with a bold call to action, but, for long stretches, nothing would happen.

That was OK; that is how Anonymous proposes ideas to itself. This reverses the order that the media was used to. In most of the world, the bold proclamation comes after the decision to act. In Anonymous, hyperbolic manifestos and calls to apocalyptic action show you want to talk about an issue. For many people reporting on Anonymous, it often looked like Anonymous was all bluster and no action.

But that’s the wrong way to look at it. For the lulzy hive mind, bluster can be the point itself. Other times, quieter, less dramatic actions would spring up and fill the channel, only for it to go quiet again when anons had moved on to another action. For the Freedom Ops, lying fallow was no shame, and dormant ops often sparked up in response to news events from the relevant region.

If the infamous #OpCartel — a call to take on murderous Mexican drug cartels — was launched to spark a real war between Los Zetas and Anonymous, it failed. If it was launched to create confusion and generate media hype, then the anons behind it can take those lulz to the bank; it was very successful as trolling. But without ever knowing who did it, we can never know why it was done, and this is the case with many, perhaps most, ops.

Anonymous’ January belonged to Tunisia, Egypt, and the Arab Spring, and it was the most serious moment in the hive mind’s history. But their February belonged to a previously obscure security company called HBGary Federal, and may have Anonymous’s lulziest of moments.