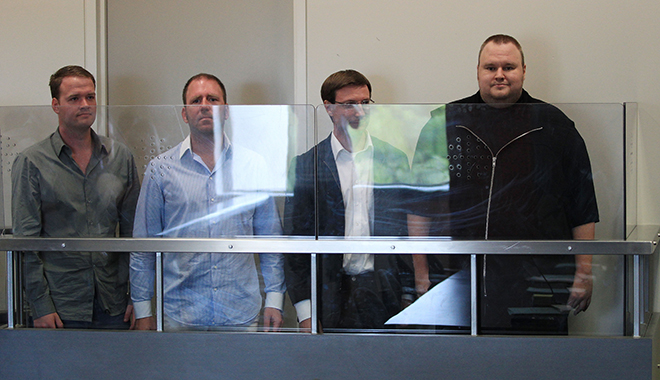 AUCKLAND, New Zealand — Megaupload founder Kim Dotcom is looking at spending several months more behind bars in New Zealand, after Judge McNaughton declined his application for bail pending the hearing to decide if the notorious former hacker could be extradited to the United States.

While placing no weight on submissions by the U.S. that Dotcom might flee New Zealand in a helicopter or chartered jet, Judge McNaughton says he cannot discount the scenario of Dotcom taking whatever money that’s still available to him and running to safe haven in Germany from where he cannot be extradited.

The District Court Judge also placed weight on the sawed-off shotgun found in Dotcom’s safe room as a factor in declining the bail application, and also noted the German internet tycoon had no qualms about changing his identity. Dotcom has Finnish and German passports in three different names and 23 separate bank accounts in Hong Kong, with over $21 million, according to the judgement, as well as accounts in the UK and the Philippines.

Judge McNaughton also expects there are contingency plans to back up Megaupload data and transfer it to another website outside U.S. jurisdiction, and notes that the file locker still has some 30 staff employed worldwide.

Dotcom has been remanded in custody until Feb. 22, awaiting the extradition request.

However, Dotcom could spend much more time in NZ prison still: Judge McNaughton says in the judgement that he is at this point “unable to determine precisely how long the [extradition] hearing would take but even if it were a full day this Court would not be able to accommodate such a hearing for some months.”

Judge McNaughton released his judgement at the District Court at North Shore in Auckland earlier today, after hearing Dotcom’s application for bail Monday this week.

In the judgement, McNaughton notes that the Megaupload prosecution is the largest to date for copyright infringement in the United States and that the racketeering and money laundering charges carry maximum penalties of up to 20 years in prison.

According to the judgement, U.S. prosecutors intend to seek the maximum penalty for Dotcom and three Megaupload partners arrested last Friday in a joint Department of Justice, FBI and New Zealand Police raid.

The U.S. must request the extradition of Dotcom and associates Batato, Ortman and van der Kolk within 45 days of their arrest.