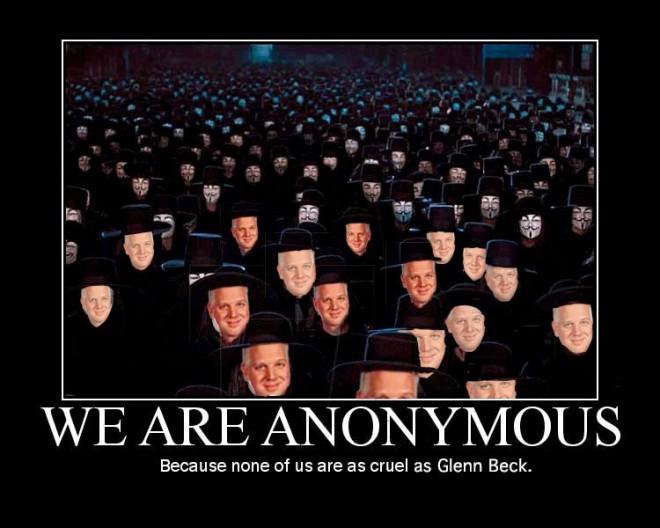 It seems that Beck has put in an application to join Anonymous. But mere words fail. The only thing you can say about about this video is WAT?

WTF does this even mean? Our heads are hurting, here at Wired.

Blogs are cogitating about this move by Beck and the possible hellfile response the collective might bring on him. But it’s not the first time Beck has poked at the hive. In this wondrous video he takes not only Anonymous on, but its self-proclaimed D&D alignment of Chaotic Good. (Looking at this handy alignment chart from the Wire, we here are Threat Level suspect Beck is Lawful Neutral, like Baltimore Mayor Tommy Carcetti)

More recently, Beck brought us a crazed ramble on the non-starter Anonymous Op to bring down the New York Stock Exchange in October. It’s genuinely hard to tell if he was warming to the collective or not by this point, and then he started talking about lifeboats and bullets and food and we kind of lost him there.

While we’re sure that some anons are thinking of going after Beck for biting its style, and others are just ignoring him, there’s another way we’d like to suggest Anonymous react to Beck.

We have a radical proposal for the hive: Embrace Beck. Don’t flame him or DDoS him or d0x him or anything. In fact, make him your official spokesman. Make him the King of Anonymous. Consider the benefits: