What was a TSA air marshal doing at an Occupy camp at 3:40 on a Saturday morning, just an hour before protestors were evicted by Boston police?

Stealing the iPhone of one of the camp’s prominent voices, then slapping her, apparently.

TSA air marshal Adam Marshall was arrested by the Boston police department at 3:50 a.m. on Dec. 10 after he allegedly argued with members of Occupy, called some of them prostitutes, struck one of Occupy’s organizers and main tweeters in the face, grabbed her iPhone and then fled.

Marshall was pursued by some 25 occupiers, according to witnesses, ditching the phone as he ran, and then was arrested by Boston police who were preparing to evict the camp. 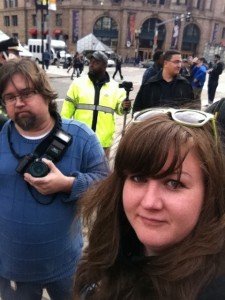 It’s unclear why a federal air marshal, the armed undercover Homeland Security agents who accompany select commercial flights, was hanging around near the camp at 3 in the morning. According to witnesses, he entered the camp a little over an hour before the police evicted the 72-day-old camp from Dewey Plaza, after the protestors lost a court battle to get a permanent injunction against police action.

Marshall is now being investigated by TSA’s internal affairs, according to the iPhone’s owner Robin Jacks, who says she met with DHS officials Wednesday.

Just prior to the eviction, Occupy founding organizer Jacks and a few other women from the occupation went to the nearby Intercontinental Hotel looking for a bathroom. This, they say, is where they ran into Adam Marshall.

“This guy intercepted us in the lobby,” said Jacks. “It was odd. He was pleasant, but super animated.”

According to Jacks, he began to antagonize them. They left, returning to the occupy.

“Maybe a half an hour or so later he was standing in the middle of camp,” said Leah Filler, an occupier who was with Jacks. Jacks says she then saw him arguing with some of the occupy musicians, and asked him to leave. Instead of leaving, he called Jacks and her companions prostitutes. Jacks began filming him with her phone, and Marshall responded by grabbing Jacks’ phone, hitting her twice, and running, according to Jacks and the police report.

“Just to be clear this guy followed us here … and called all of us prostitutes,” she narrated while filming him.

Leah Filler, one of the occupiers, was beside Jacks at the time.

“He turned around and grabbed the phone with his right hand, and he hit her with his left hand,” Filler said. With that, he took off running. He was chased by the occupiers and was arrested by Boston police in minutes. He threw her phone into a tent while being chased. Jacks chose to press charges.

“When he was getting into the (police) car he alternated between saying ‘I’m a UMass (University of Massachusetts) student!’ and ‘I’m a federal agent!’,” Jacks said, adding she thought it sounded hilarious at the time. Many of the occupiers, and possibly a few police, laughed at Marshall’s assertion.

The occupiers’ assertions are backed up by the police report (page one here) obtained by Wired:

Victim while in the area of Occupy Boston Opposite 600 Atlantic Ave., Federal Reserve Bank was with a group of occupiers who were arguing with the suspect. Suspect called the victim a prostitute, slapped her once on both sides of her face, grabbed her iPhone from her hand and fled. About 25 occupiers pursued the suspect across Atlantic Ave., stopping suspect in front of the bank. A pat frisk was conducted, no iPhone was found on the suspect. Victim did not require any medical attention. Occupiers declined to identify themselves.

Suspect placed under arrest for unarmed robbery, transported to Area A-1, and booked in the usual manner.

Robin Jacks is one of main tweeters of all things Occupy Boston, as well as one of its founders. She was, that night, waiting to live-tweet the impending end of the occupation of Dewey Square she’d helped begin. Live-tweeting the occupation prolifically throughout its life has made her a de facto chronicler of it.

Jacks was also no stranger to the police. Some officers followed her Twitter account and even interacted with her on the social media platform. Many officers on site at Dewey would greet her by her Twitter handle, @caulkthewagon (named for a way of getting across a river safely in the classic game Oregon Trail). The tweets of @caulkthewagon had become vital witness to life in Boston’s occupy, and through both of their evictions.

Jacks said she received a phone call last week from an internal investigator for the Department of Homeland Security confirming that Marshall was being investigated for his arrest by his employer – the TSA. Jacks said she visited an internal affairs officer Wednesday at the ACLU office in Boston, accompanied by an ACLU attorney, and told her story.

“They were specifically with the TSA, which is obviously what an air marshal is covered under,” said Jacks. She described the interview as pleasant, and said they told her story was in line with what they’d seen after reviewing surveillance video of area of the occupy from that night.

Marshall’s LinkedIn profile indicates he works for Homeland Security, but he did not respond to a message through LinkedIn seeking comment.

The TSA would not confirm to Wired Marshall’s employment status or his role within the Federal Air Marshal Service, releasing this statement: