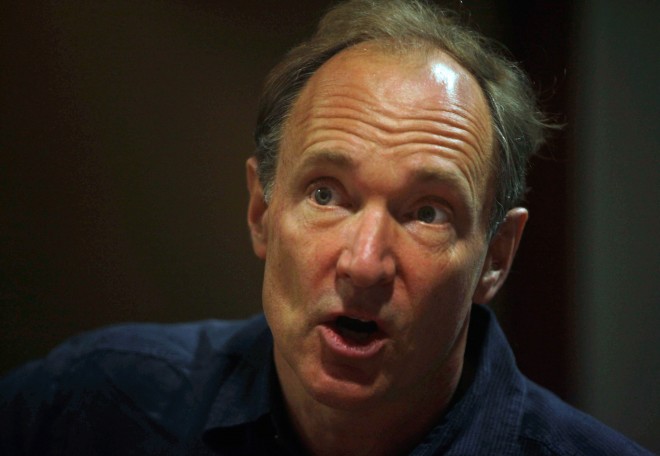 The inventor of the World Wide Web, Tim Berners-Lee, testified in a courtroom Tuesday for the first time in his life. The web pioneer flew down from Boston, near where he teaches at MIT, to an eastern Texas federal court to speak to a jury of two men and six women about the early days of the web.

His trip is part of an effort by a group of internet companies and retailers trying to defeat two patents — patents that a patent-licensing company called Eolas and the University of California are saying entitle them to royalty payments from just about anyone running a website with “interactive” features, like rotating pictures or streaming video.

(For background on the case and patents, see our story “Patent Troll Claims Ownership of Interactive Web — And Might Win“)

The defendants, including Google, Amazon, and Yahoo, are hoping that Berners-Lee’s testimony—combined with that of other web pioneers like Netscape co-founder Eric Bina, Viola browser inventor Pei-Yuan Wei, and Dave Raggett (who invented the HTML “embed” tag) — will convince the jury that the inventions of Eolas and its founder, Michael Doyle, aren’t worth much. The stakes couldn’t be higher — if Berners-Lee and the defendants don’t succeed, Eolas and Doyle could insist on a payout from almost every modern website.

Berners-Lee, a slight 56-year-old man, spoke quickly and quietly; at one point, Judge Leonard Davis asked him to speak up. “We have a language situation with your accent that makes it doubly
difficult,” he told the scientist. Berners-Lee shifted position and looked about the room as he spoke, and seemed uncomfortable at times.

“Mr. Berners-Lee, why are you here?” asked Doan.

“I am here because I want to help get some clarity over what was obvious, and what was the feeling of computing [in the early 1990s]…. The tools I had in my knapsack, so to speak,” he said.

After describing how Berners-Lee worked at CERN in Switzerland back in the 1980s, Doan moved on to the web. When Berners-Lee invented the web, did he apply for a patent on it, Doan asked.

“The internet was already around. I was taking hypertext, and it was around a long time too. I was taking stuff we knew how to do…. All I was doing was putting together bits that had been around for years in a particular combination to meet the needs that I have.”

Then Doan moved on to the heart of Berners-Lee’s testimony: to establish the importance of the Viola browser, created by Pei Wei, who was at that time a computer science student at UC Berkeley. The Viola browser is a key piece of “prior art” that the defendant companies hope will invalidate the UC/Eolas patent.

Berners-Lee described Viola as “an important part of the development of the web.”

The jury was shown an e-mail from Pei Wei to Berners-Lee dated December 1991 — almost two years before Doyle’s invention — which read in part: “One thing I’d like to do soon, if I have time, is to teach the parser about Viola object descriptions and basically embed Viola objects (GUIs and programmability) into HTML files.”

Later Tuesday, Wei would testify that he had demonstrated interactive elements working in the Viola browser to Sun Microsystems in May 1993 — several months before Doyle claims to have come up with his invention.

Finally, Doan turned to Berners-Lee’s book, in which he described Wei as “a very inventive student at UC Berkeley.” Berners-Lee described how the web community at that time wasn’t focused on patents or even money — Wei simply put his invention online for free.

“It was ahead of its time,” said Berners-Lee. “The things Pei was doing would later be done in Java.” Java was heavily used in the late 1990s to add interactivity to web pages, later to be supplanted by Flash, Javascript and now HTML5.

His own act, creating the World Wide Web, was more a matter of personalities and persuasion than it was a matter of hammering out code, he explained.

“[My book] is the story of those times — inventing it, and not so much inventing but the social process of trying to get everyone to use the same standards. The reason the Web took off is not because it was a magic idea, but because I persuaded everyone to use HTML and HTTP.”

“There’s been a debate, in Europe, about whether to allow the patenting of software,” McKool began.

“There have been debates, in general, for many years [about software patents],” replied Berners-Lee.

“They don’t allow patenting of software over there, do they?”

The scientist on the witness seemed to start an answer, then reconsidered, saying only: “I’m not a patent attorney.”

“You do understand that under United States law — in this country — our country can and does grant patents on software?” asked McKool.

Then McKool brought up a 2004 article in the International Herald-Tribune, in which Berners-Lee was quoted being critical of software patents.

On the stand, Berners-Lee hesitated to condemn software patents in general, but made clear he was concerned about the Eolas patents.

“I clearly — I had concerns about the software patent system in the U.S., and this particular patent is key in raising those concerns,” said Berners-Lee, looking increasingly worn down.

McKool pulled up a slide from a talk Berners-Lee gave in 2004, when he accepted an award in Finland. The bullet points noted that in the U.S., software patents created “fear, uncertainty and doubt” and an “incentive for obfuscation.” The bar for what constitutes a novel invention is “set ridiculously low” by the U.S. Patent Office, the slide stated.

“What you say,” said McKool, raising his voice and slowing down as he reached the most nationalistic part of his cross-exam, “is that Europe should stay clear of the mess the U.S.A. is in.”

Berners-Lee quietly concurred. Those looked like his slides; his points.

It’s hard to tell what kind of impact Berners-Lee had on the case. His celebrity status in the tech world is probably unknown to the jurors, and he was tough to follow at times. At best, he might lend some gravitas to the defendants’ plan: rolling out a series of web pioneers associated with early technologies—like the MOSAIC and Viola browsers — to show that Doyle and his company weren’t first.

After his testimony, several lawyers from the audience approached the “father of the web,” hoping to meet him and shake his hand. I also approached, handing him a card and telling him I was a journalist here to cover the trial.

“There are a lot of people who want to understand what this trial is about, and why it’s here,” I said. “People want to know why it’s so important that you came to Tyler.”

He saw that my card was from the journalism school at UC Berkeley, where I have a reporting fellowship.

“University of California,” he said. “So, do you teach journalism?” He seemed more interested in the idea that I might be a professor than anything else.

“That’s important, journalism,” he said, seeming distracted but also heartfelt. “Keep up the good work. It’s about getting the truth out to the world, I suppose.”

But he wouldn’t be able to help me with that. Not today, in this room in Tyler, in a room full of dark-suited lawyers. More than 20 years after the quiet English scientist had set the web in motion, he seemed to sense that in Texas, his invention was confronting something new and threatening.