A Texas Jury Now Deliberating Who, if Anyone, Owns the Web 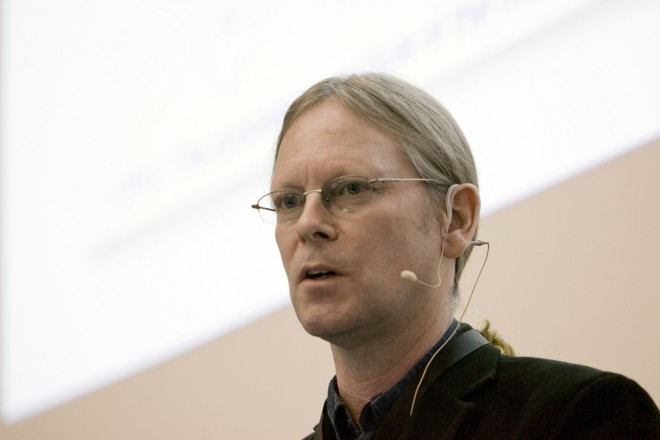 Dave Raggett, speaking here at an internet conference in 2008, invented the embed tag and testified Wednesday against a patent on the web's interactivity. Credit: IOT2008/Flickr

TYLER, Texas — The Eolas patent case, just submitted to a jury in the “rose capital” of Texas boils down to one question: “Who was first?”

The answer to that question will determine whether the rich, interactive web as we know it is owned by the world or whether that core technology is actually owned by an obscure company that will be able to extract royalties from a mind-bogglingly wide swath of the web.

Specifically, eight jurors in eastern Texas are now considering whether the first computer program that allowed access to an “interactive web” was created by the little-known Chicago biologist Michael Doyle, who runs a patent licensing company out of Chicago. Or was it one of the web pioneers put on the stand by the defendant companies — such as Pei-Yuan Wei and his Viola browser, or Dave Raggett and his <embed> tag?

(For background, see our exclusive coverage of the trial Patent Troll Claims Ownership of Interactive Web – And Might Win and Tim Berners-Lee Takes the Stand to Keep the Web Free.)

Doyle is suing internet companies and retailers, including Google, Amazon and Yahoo, who are trying to defeat two patents — patents that Doyle’s patent-licensing company called Eolas and the University of California say entitle them to royalty payments from just about anyone running a website with “interactive” features, like rotating pictures or streaming video.

The dueling teams of lawyers have spent millions creating elaborate presentations, trying for the last three days to convince a jury of average folks in a federal district court in eastern Texas that their side is right.

Doyle and his two co-inventors have all testified this week, saying that they had their idea conceived at University of California San Francisco by September 1993, and began demonstrating it in November 1993. It was called the “Visible Embryo Project,” and was a system that allowed doctors to view embryos from the Carnegie Collection.

In 1994, they signed an invention disclosure form with the University and began the process of patenting their invention. That resulted in the ultimate issuance of a patent in 1998.

“We call it the interactive web,” said Doyle on the stand. “These models could be used to model healthy babies, and plan inter-uterine surgery.”

“Are you aware of anyone who had accomplished that earlier?” asked Mike McKool, Doyle’s lead lawyer.

The testimony was echoed by his two co-inventors, David Martin and Cheong Ang, who testified later. Ang, the lead programmer on the project, says that he “worked really long hours, sometimes all the way thru the night.”

All three inventors own stock in Eolas and stand to benefit from the company’s patent-licensing program if they’re successful at trial. Doyle owns 40 percent of the company, while Martin testified that he owns about 8 percent. Cheong Ang didn’t specify the percentage he owns.

Whatever their take from verdicts and settlements, the University of California is getting a significant cut, reported some years ago to be 25 percent.

The defense put a number of web pioneers on the stand, including the web’s progenitor Tim Berners-Lee.

Pei-Yuan Wei testified that he had conceived of making interactive features as early as 1991, and by May 1993 had demonstrated them to Sun Microsystems.

Two computer scientists who were just UC Berkeley students back in the ’90s — Wei and Scott Silvey — testified that they combined Wei’s Viola browser with a program called V-Plot that allowed users to rotate an image of an airplane.

He was thinking of a system like that as early as 1991, and he demonstrated Viola, together with V-Plot, to Sun Microsystems in May 1993. That was months before Doyle’s team says it conceived its invention.

Netscape co-founder Eric Bina was at that demonstration, too. Wei’s demonstration of moving objects in Viola “inspired me,” said Bina in testimony.

But Eolas lawyers attacked that testimony because the code couldn’t be found any longer. Defense lawyers wanted to show the jury a video of V-Plot and Viola at work.

The defense found and submitted nearly identical code, dating from May 12, 1993, less than a week after Doyle’s team filed its patent. But Judge Leonard Davis ruled that the five-day-late code — which defense lawyers trawled through almost 100 gigabytes of backup tapes to find — wasn’t good enough. The jury never saw the V-Plot video.

Bina also testified that the Eolas invention was mostly a takeoff on his own Mosaic browser, in any case. When he was asked to check out the code made by the UCSF team, Bina found that Doyle and his colleagues had added only 334 lines of code added to about 18,000 lines total.

Had Bina gone to the Patent Office, to tell them what was going on? No, Bina said.

Doyle and his co-inventors had already acknowledged they were working from previous browsers.

“We were excited to use Mosaic and Viola as building blocks,” said Doyle.

Doyle’s partner Cheong Ang testified that the code he added to Mosaic to build the Visible Embryo Project was a significant breakthrough, and worthy of a patent, even if not lengthy in terms of lines of code.

Raggett created the <embed> tag – now used to include code into a webpage from an outside source, such as a YouTube video in a news story, but it ultimately wasn’t accepted into the initial draft of HTML standards. Still, his early demonstrations are being asserted to invalidate the Eolas patent.

The Biggest Question of All: What If?

Both sides are spending a fortune putting on this case — a multimillion-dollar show being put on for eight regular citizens of East Texas, who will ultimately make the choice. The question of “Who was first?” has everyone’s focus.

Pretend Doyle’s team created interactive web features in the middle of 1992, or even 1991.

Imagine Doyle and Cheong Ang had incontrovertibly beat Pei-Yuan Wei and Dave Raggett — a fair question would be, so what?

They didn’t stay on and develop their own new web innovations — pushing the web to become the world’s greatest invention for the spread of information.

They didn’t found the Netscapes and Amazons and Googles of the world.

And yet, they want their cut of the internet’s wealth — more than $600 million, as a start, from less than a dozen companies.

Because of the way the U.S. patent system works today — allowing patents on software, there are hundreds of Eolases, who have sued thousands of companies in the past few years.

This trial makes clear the huge imbalance in the U.S. patent system.

Even assuming the Visible Embryo Project was a major and early advance in software coding — something that is far from clear, based on the evidence — the fact that the U.S. legal system is poised to grant Doyle and his investors a 20-year monopoly on the interactive web, a tax of possibly billions, is a reward that seems incommensurate with the effort.

And the fact that Doyle’s partner in trying to collect on their code is the University of California — the nation’s largest research university — boggles the mind.

It was UC Berkeley students, like Pei-Yuan Wei and Scott Silvey, who testified here, who competed by working at the eXperimental Computing Facility.

The fact is, Doyle didn’t go on to be involved in the web and create popular new technologies. And if Raggett and Wei had “lost” the competition — they were very close to independently inventing it themselves, but were balancing it with other work.

Raggett’s tag, for example, was shown off at a web conference but ultimately not approved.

“People were still interested in embedded objects,” Raggett explained on the witness stand — a chair he had flown in from England to sit on. “But it was just one of many features … it was de-prioritized.”

Even in a country where so many are skeptical of government, the patent system can stand up in court as a kind of civic religion.

Not even the defendant companies now being sued officially question its value, and they said so again to the jury today.

“We’re not suggesting there’s anything wrong with having patents,” said defense lawyer Doug Lumish to the jury during closing arguments today. “We respect intellectual property, and we have it ourselves.”

And in their closing arguments, Eolas lawyers called again for the jury to reinforce the Patent Office’s decision.

“More than 25 different patent examiners spent a decade and a half studying the patent and reached the conclusion [that it is valid],” plaintiff’s attorney Doug Cawley told the jury.

Defense lawyer Jennifer Doan took careful aim as she tried to put the patent office’s work in perspective. “You know how many times the patent office considered the patent [during one reexam]? Two days. That’s 1.7 minutes per reference. But it took seven years because the process was suspended.”

Meanwhile, while Doyle and his legal team kept a constant focus on the Patent Office in Alexandria, the web workers coded on. The patent office never heard from Bina, or Berners-Lee, or Raggett or Pei-Yuan Wei, or really heard the defense side of the story, she said.

The jury was sent off to deliberate Thursday afternoon, and it’s far from clear who is going to win — though a verdict is likely to be delivered later Thursday or on Friday.

The defense put on a solid case, but lost a lot of key evidentiary motions, such as the ruling on the V-Plot video; and the jury was never told the true nature of Eolas, a patent-licensing company that wants to get the Web to pay up for its patents.

They don’t know that what Eolas is doing has exploded into a cottage industry, with hundreds of patent-holding companies suing thousands of companies in recent years.

Asking a jury of citizens not schooled in engineering or technology to second-guess the patent-office — a group of faraway experts, surrounded by piles of paper, granting red ribbons — this has become a very tough sell.