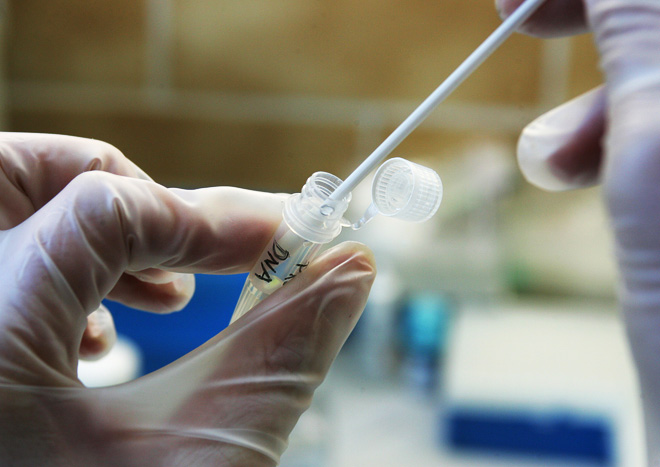 A federal appeals court Thursday upheld a voter-approved measure requiring California authorities to take a DNA sample from every adult arrested on felony accusations in the Golden State.

The American Civil Liberties Union, which brought the challenge in hopes of striking down the measure, argued that DNA sampling of arrestees was an unconstitutional Fourth Amendment search and privacy breach. A lower court had refused to stop the program that has resulted in California securing a DNA database of more than 1.5 million people.

He added that DNA collection “is substantially indistinguishable from traditional fingerprinting as a means of identifying arrestees and, incidentally, tying arrestees to criminal investigations.”

At least 21 states have regulations requiring suspects to give a DNA sample upon an arrest. President Barack Obama supports taking DNA when a suspect is arrested.

Proposition 69, adopted in 2004 and fully implemented in 2009, requires adult detainees to provide a saliva, or sometimes a blood sample, upon felony arrest. The sample is stored in state and FBI databases, even if the arrested adult is never charged or convicted of a crime.

About 100,000 persons arrested for felonies in California are ultimately cleared every year.

I would conclude that Proposition 69 is unconstitutional. My reasoning is straightforward. Fingerprints may be taken from an arrestee in order to identify him — that is, to determine whether he is who he claims to be. But fingerprints may not be taken from an arrestee solely for an investigative purpose, absent a warrant or reasonable suspicion that the fingerprints would help solve the crime for which he was taken into custody. DNA samples are not taken from felony arrestees under Proposition 69 in order to identify them. Rather, they are taken solely for an investigative purpose, without a warrant or reasonable suspicion.

Judge Smith countered, saying Fletcher’s dissent was an “unprecedented and misguided reading of the Fourth Amendment.”

The lawsuit (.pdf) does not challenge DNA sampling for convicted felons or for DNA samples required by a court order.

The ACLU, like Fletcher, said DNA sampling is different from compulsory fingerprinting. A fingerprint, for example, reveals nothing more than a person’s identity. But much can be learned from a DNA sample, which codes a person’s family ties, health risks and, according to some, can predict a propensity for violence.

What’s more, in California, the authorities conduct so-called “familial searching.” That is when a genetic sample does not directly match another, so authorities start investigating people with closely-matched DNA in hopes of finding leads to the perpetrator. In 2010, for example,  California authorities arrested Lonnie David Franklin Jr. as the suspected “Grim Sleeper” serial killer, basing their case in part on a DNA match of crime scene evidence to a sample from his incarcerated son.

The courts have already upheld DNA sampling of convicted felons, based on the theory that the convicted have fewer privacy rights. Still, the U.S. Supreme Court has held that when conducting intrusions of the body during an investigation, the police need so-called “exigent circumstances” or a warrant. That alcohol evaporates in the blood stream is the exigent circumstance to draw blood from a suspected drunk driver without a warrant.

Arrestees not convicted may petition the courts or the California Department of Justice to destroy and expunge their DNA profile. However, individuals must await the expiration of the statute of limitations for the crimes for which they were arrested before requesting expungement, unless prosecutors dismiss the charges sooner.