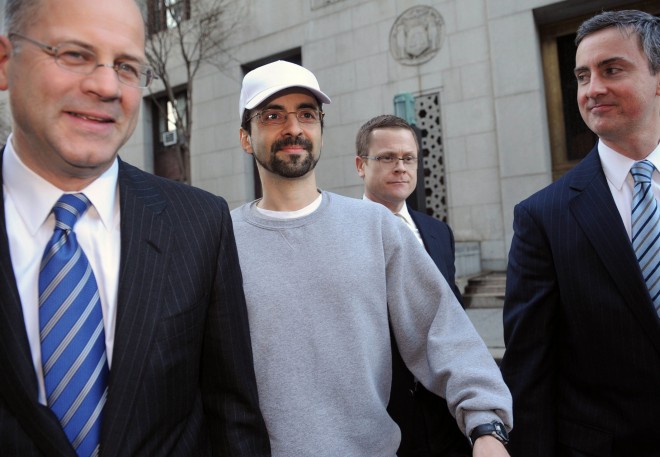 A federal appeals court on Friday reversed the conviction of a former Goldman Sachs programmer sentenced to eight years for stealing the bank’s high-speed trading software.

Sergey Aleynikov, 41, was convicted in 2010 of theft of trade secrets under the Economic Espionage Act.

The Russian-born Aleynikov worked for Goldman Sachs until June 2009, when authorities say he siphoned source code for the company’s valuable software on his way out the door to take a new job with another company. The software is used to make sophisticated, high-speed, high-volume stock and commodities trades. It earns the company “many millions of dollars in profits” each year, according to prosecutors.

The 2nd U.S. Circuit Court of Appeals heard his appeal on Thursday, and hours later and without explanation, reversed the 2010 conviction and ordered him acquitted, which usually forbids a retrial. On Friday, however, the court issued an amended order. It reversed the conviction, and ordered him free on $750,000 bond but removed the acquittal language. The appeals court said it would issue an opinion explaining the order in “due course.” (.pdf)

The New York Times summed up the court’s concerns during Thursday’s oral arguments. The paper noted that a critical issue was whether what he did was actually a crime under the Economic Espionage Act, which requires the theft to be from a “product designed for interstate commerce.” Aleynikov’s lawyers took the position that the software wasn’t used in interstate commerce, while the feds argued that it clearly was.

Aleynikov, a naturalized U.S. citizen who emigrated from the disintegrating Soviet Union in 1991, earned nearly $400,000 a year as a vice president with Goldman Sachs. He was arrested in July 2009 at the Newark Airport in New Jersey as he returned from a trip to Chicago.

Authorities alleged he stole “hundreds of thousands of lines” of source code from Goldman Sachs in the days before he left the company. They alleged that he downloaded various software from the Goldman Sachs network and transferred it to a storage website hosted in Germany, before trying to erase his tracks from Goldman Sachs’ network.

Aleynikov allegedly used a script to copy, compress, encrypt and rename files, and then upload them to the server in Germany. Once the data was transferred, the program that was used to encrypt the files was erased, and he allegedly attempted to delete the network’s batch history showing his activity.

Prosecutors said Aleynikov made several copies of the code and had it on his laptop when he flew to Chicago to meet his new employers at Teza Technologies in Chicago. Prosecutors said a search of Teza computers uncovered no copies of Goldman Sachs’ source code.