How the European Internet Rose Up Against ACTA 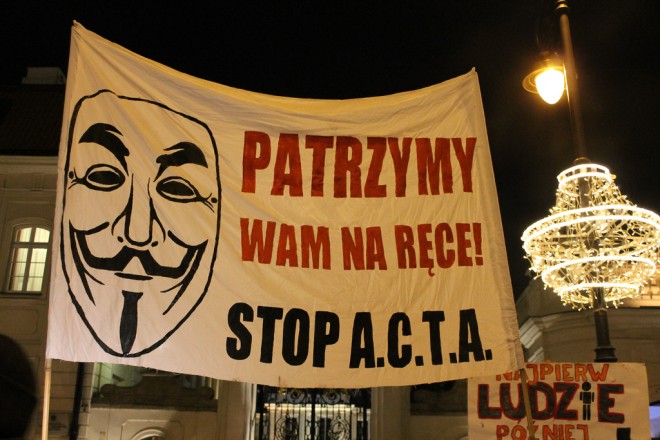 Prime Minister Donald Tusk of Poland sent a letter to his fellow leaders in the EU Friday urging them to reject ACTA, reversing Poland’s course with the controversial intellectual-property treaty, and possibly taking Europe with them.

“I was wrong,” Tusk explained to a news conference, confessing his government had acted recklessly with a legal regime that wasn’t right for the 21st century. The reversal came after Tusk’s own strong statements in support of ACTA and condemnation of Anonymous attacks on Polish government sites, and weeks of street protest in Poland and across Europe.

The seeming overnight success came after both years of work by European NGOs, and the spark of the SOPA/PIPA protests in America (which included Wired.com).

ACTA, or the Anti-Counterfeiting Trade Agreement, is an international treaty that was negotiated in secret over the span of four years. While the provisions are currently public, their genesis was hidden from democratic scrutiny, and most nations signed on to ACTA without any chance for their citizenry to review or comment on the process. Beyond its undemocratic origins, it’s often unclear how ACTA’s requirements would be implemented, or could be implemented without creating a technical architecture online that restricts speech. For instance, ACTA’s harsh DMCA-like provisions against anti-circumvention could effectively render some free software, which by its nature can’t support DRM, illegal in the Western world.


Many in Europe, and especially the former Soviet-controlled countries like Poland, are sensitive to anything that smacks of censorship. Activists in places like Poland and Germany saw the specter of authoritarian control in both the secretive imposition of ACTA and in the possible consequences of its technical provisions. The American architects of ACTA, not having had the recent experience of oppression, seem to have often been tone-deaf to the European fears.

Mike “rysiek” Woźniak, vice-president of the board of the Polish Free and Open Source Software Foundation, has been working against ACTA for three years. But in the wake of the SOPA/PIPA protests, the people were ready to listen.

“[The Polish people] felt they were left out of the loop, somebody made an important decision for them and without their knowledge,” Woźniak said. People began to self-organize on Facebook, and the NGOs like Woźniak’s stepped in to give them tips on lawful and effective protests.

On Jan. 25, tens of thousands of Poles from across the political spectrum turned out on the streets of Polish cities to protest the Treaty. Popular Polish websites went dark in echos of the English-language Wikipedia’s Jan. 18 day of darkness (which Wired also participated in). In a moment that generated an iconic image that has raced around the net, members of the Polish Parliament simultaneously donned Anonymous-style Guy Fawkes masks to show their disapproval of ACTA, even as DDOS attacks were still being launched against government sites by the hacker collective.

On Feb. 6, all this activity culminated in an unprecedented conversation between Polish Prime Minister Donald Tusk and — for want of a better word — the internet, that lasted the better part of seven hours.

People used social media to lob questions and comments, but when the anti-ACTA NGOs involved said Twitter and Facebook were not sufficiently open and transparent platforms for voicing public opinions and suggested IRC (Internet Relay Chat) the government agreed. #debataACTA and #debataACTA-pytania were set up on the IRC server of the political hacker group Telecomix, where a geekier set came to participate. The discussions were projected for the PM who answer questions and points for hours while the event was livestreamed and broadcasted over Polish TV and Radio.

Meanwhile, ACTA was causing furor across Europe as thousands turned out from Slovenia to Sweden to Germany.

The Slovenian ambassador who signed ACTA issued a penitent statement about her actions, saying “I signed ACTA out of civic carelessness, because I did not pay enough attention,” even apologizing to her own children, as well as her people. February 11 was declared an Anti-ACTA protest day, with protests in hundreds of European cities, including something north of 30,000 people in Germany.

Then today in Poland, the place that started the European backlash, the Prime Minister issued his total reversal and advised his peers across Europe to join him.

“The fact that the PM called the EU to reject the treaty and the fact that he indicated a strong need for a serious debate on intellectual property law reform is of crucial importance, we agree with that completely. We do hope these are the first steps in a long process and hope that this move will be followed by next, confirming this government’s dedication to solving these issues,” says Woźniak, “This is the first step, an important one, but still just a step… but it does feel like there is a change of air.”

At this point many countries in Europe that have signed the treaty have set aside ratification in response to public outcry, effectively hampering the ratification and implementation of the treaty.