Occupy DC Evicted From a Winter of Communal Discontent 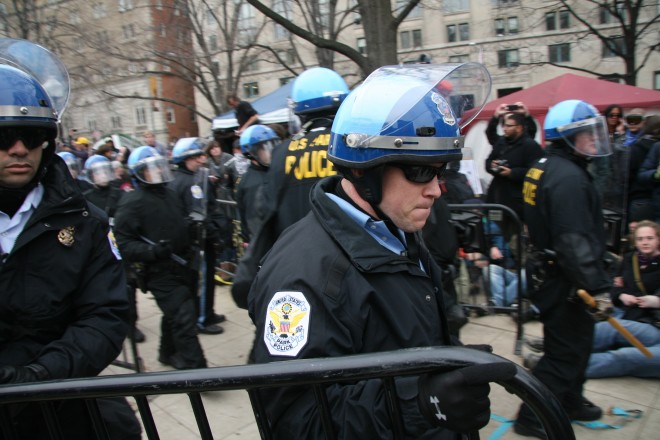 National Park Police prepare barricades for pushing the occupiers out of McPherson Square.

On Saturday evening at McPherson Square on the infamous lobbyist-dominated K Street, the last sliver of D.C.’s Occupy encampment was charged by an inscrutable line of riot police, SWAT, and mounted police while officers yelling out “This area is closed! If you remain you are subject to arrest!” Pushed back from the encampment’s library tent by a riot shield at face level, I began to fall back into the crush of people, as the rain fell and Occupiers tripped over debris in the mire.

Screams of anger, panic, and pain began to cut through the grey air, and I managed to get back into the crowd a bit, away from the police. In the midst of the pressed and screaming crowd I saw two occupiers, Mo and Georgia, find each other, and hug. They stayed there, oblivious to the cacophony around them, both their eyes glassy and vacant and a little too wide open.

I grabbed a woman I recognized from the info tent and pointed to them. “Get them out of here,” I told her. She just looked at me for a moment in the chaos, and I repeated, “Get them the fuck out of here.” She nodded and grabbed them, still hugging. I spun around, and the riot line was on me. Pushed from every direction, I tripped over something behind me which turned out to be a person on the ground. The officer in front of me screamed “Move back!” but other people were falling on the fallen, and there was no way to move back without trampling them, and no way to stay without being trampled.

I’d arrived to stay with the McPherson Square Occupy DC camp five days earlier. Occupy DC was the one of the two last major-city Occupys, split into two between McPherson Square on K Street, and Freedom Plaza, six blocks away by the White House.

The other, Occupy Miami, was facing eviction at that moment. Occupy DC, like the original Wall Street Occupy, had a geographical specialness. They regularly put on actions meant to get in the face of the power elite, embarrass and disquiet them. Occupy DC was not only one of the last large encampments; it was one of the best at generating media coverage.

They’d erected the People’s Barn, they’d had actions aimed at Congress, they’d taken the steps of the Supreme Court, and they’d laid across K Street in puddles of rain to be arrested, protesting the power of lobbyists in American politics.

Every move had been followed by the press, keeping their movement as a going concern in the face of stories about one Occupy eviction after another across the country.

The McPherson side of Occupy DC was flamboyant; the Freedom Plaza side older and more staid. In their disagreements they played out a story of the larger Occupy Movement — old protest tactics versus the new social media, cooperation versus confrontation, traditional hierarchical organization versus the emergent properties of adhocracy. But at the end of the day, they were part of one Occupy DC.

I showed up shortly after the camps received a notice that a Park Service ban on sleeping would be enforced soon. In general, the camps believed they were supported, rather than persecuted by the Park Police.

National Park Service Director Jonathan Jarvis had defended the protester’s First Amendment rights in the park to a hostile Congressman Darrel Issa (R), of California, during congressional hearings. But no one was sure what enforcement would look like, and theories ranged from pro-forma walkthroughs to full-on eviction.

Like many Occupys, MacPherson’s tents were home largely to the hopeful homeless, people who’d slipped beyond the event horizon of American poverty, who were joined by a daytime crowd of activists spanning the country’s social and political strata. The techno-savvy and politically outraged affluent often came face to face with American lives that had been invisible for them until the Occupy movement began.

“This camp is a microcosm of America, it has all the problems of America,” Women’s Caucus member Britta told me. As an environment, Occupy DC wasn’t welcoming for women at night.

Men were often unpleasantly complimentary, sometimes standing too close for too long, or just leering. Other men and women tried to step in when these things happened, but it was frustrating for everyone, including Occupier Jim Fussell, part of the Occupy Faith DC.

“There’s an atmosphere that I can be totally myself here, but I also don’t have to respect other people in the same way that might be demanded in other institutions,” Fussell said. Drawing people who had often never experienced respect into conversations about respecting others was a slow and difficult process.

Brian Grimes is a large man with soft eyes and a full, red beard. I met him during a moment of “De-escalation,” the Occupy DC terms for security.

In the background a homeless alcoholic was being asked to leave the park — yet again — after drinking in the park and shouting at people. Grimes stood at the scene to keep people from crowding the conversation where other people on the De-escalation team told the man he needed to leave, taking his alcohol, and waiting for him to yell it out. Eventually he grew quiet and they picked up his tent and carried it out with him.

Grimes looked tired as he sat on a bench afterward, exasperated with the problems of camp life.

“Sometimes it feels like, ‘Wow, we’re just not going to get anywhere.’ Sometimes it’s just a matter of going through a period of feeling like I’m not accomplishing anything personally,” he said after the difficult scene.

As we talked, a few rats ran by. McPherson had a terrible rat problem, even before the protest camp began. They were everywhere, darting between tents, rustling in the trash. The occupiers had closed the kitchen and prepared food offsite, but the rats remained nearly impossible to control. They are a regular feature of all DC parks, but they are also drawn to human habitation.

Grimes alternated between talking about how hard life at McPherson is and how frustrating the political problems that brought him here are.

“This is such a stressful, taxing environment to exist in,” he said, but there’s another side, too. “I found more of a purpose here in some ways than I really intended to.”

Grimes had been out of work for a year and had fallen out with family, but it was after watching the Brooklyn Bridge arrests that he decided to head to the Occupy.

He joined Occupy DC just as it was starting, and despite the troubles, has stayed ever since, with only a couple breaks. Occupying for Grimes is both political and personal. He talked about systemic problems with healthcare, student debt, and the failure of the American political process, but also about coming to love what he does in the camp. “I like to help people…. I keep people safe for a night,” he said. “Even if it’s just a little bit at a time, we’re changing things.”

For his part, Occupy Faith DC’s Fussell says he stuck by the camp, even when it was frustrating and hard, because the political system has been hijacked by money and because it’s a chance to pass on his belief in non-violence.

“The political landscape has drastically changed, not because there’s a 1%, but the degree of separation between the 1% and the rest of us means that they have way more political clout, and basically can manipulate both political parties,” said Fussell.

In his late 40s with teenage children, Fussell is older than most of the camp. He’s been a non-violent activist much of his life, and sees Occupy as a chance to teach a new generation. “It’s been fun seeing a lot of them, being sharp, discover non-violence theory,” he said. He’s also proud how people jump from task to task in the Occupy, learning skills from kitchen maintenance to web design.