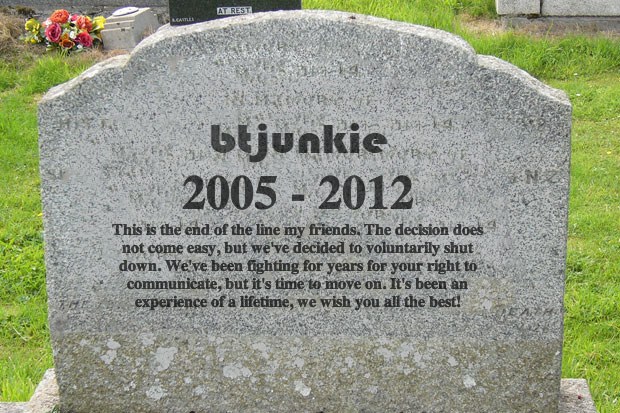 Torrent search engine BTjunkie is the latest file-sharing service to fall on its sword in the wake of the Megaupload sting. BTjunkie, one of the largest BitTorrent indexes, decided to shut down voluntarily.

A statement on the website reads, “This is the end of the line my friends. The decision does not come easy, but we’ve decided to voluntarily shut down. We’ve been fighting for years for your right to communicate, but it’s time to move on. It’s been an experience of a lifetime, we wish you all the best!”

The site was never directly targeted by copyright holders, an unnamed BTJunkie founder told TorrentFreak. However, the site was reported to the US Trade Representative (USTR) in 2011, the RIAA and MPAA listed the torrent index as a ‘rogue’ site, and Google censored the search term.

Despite avoiding legal attention so far, the site’s founder told TorrentFreak that the legal action against file-sharing sites Megaupload and The Pirate Bay played an important role in its
closure.

Online storage locker Megaupload was seized and shut down by the US Department of Justice in January for allegedly breaching copyright infringement law. Several of the site’s staff members were arrested and founder Kim Dotcom was
recently
denied bail.

Meanwhile, the founders of The Pirate Bay were arrested for copyright infringement in 2009. This month, the supreme court of Sweden made the ruling final, and announced that the founders will not be able to appeal their months-long prison sentences or combined fines of 46 million kronor (around £4.3 million).

In response to Megaupload’s shutdown, a raft of popular web lockers have neutered the ability to share files with others. FileSonic, FileServe and Uploaded.to all cut off file-sharing in the days
after Megaupload was seized.

The Pirate Bay, on the other hand, moved its domain name from .org to the Swedish .se. A Pirate Bay insider told TorrentFreak that this was to prevent US authorities from seizing the popular domain.