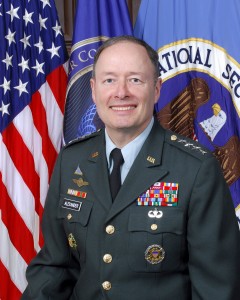 In a rare break from the NSA’s tradition of listening but not speaking, NSA chief General Keith Alexander was grilled Tuesday on the topic of eavesdropping on Americans in front of a House subcommittee.

The questioning from Rep. Hank Johnson (D-Georgia) was prompted by Wired’s cover story this month on the NSA’s growing reach and capabilities, but leaves Americans with as many questions about the reach of spy agency’s powers as they had before Alexander spoke.

Alexander denied, in carefully parsed words, that the NSA has the power to monitor Americans’ communications without getting a court warrant.

But Alexander’s comments fly in the face of people who actually helped create the agency’s eavesdropping and data mining infrastructure. Few people know that system as well as William Binney, who served as the technical director for the agency’s M Group, which stood for World Geopolitical Military Analysis and Reporting, the giant 6,000-person organization responsible for eavesdropping on most of the world.

He was also the founder and co-director of the agency’s Signals Intelligence Automation Research Center, which helped automate that eavesdropping network. Binney decided to leave after a long career rather than be involved in the agency warrantless eavesdropping program, a program he said involves secret monitoring facilities in ten to twenty large telecom switches around the country, such as the one discovered in San Francisco’s AT&T installation a few years ago.

More recently, President Bush said falsely that no American had been wiretapped without a warrant at the same time the agency was eavesdropping on thousands of Americans without a warrant as part of the later revealed Operation Stellar Wind. The Congress then passed a bill granting immunity from prosecution and law suits to the telecom companies involved in the illegal program.

Also, in the same way that General Alexander carefully parsed his words, the agency has always maintained its own secret definition of words in a document known as United States Signals Intelligence Directive 18, a document classified above top secret.

For example, NSA can intercept millions of domestic communications and store them in a data center like Bluffdale and still be able to say it has not “intercepted” any domestic communications. This is because of its definition of the word. “Intercept,” in NSA’s lexicon, only takes place when the communications are “processed” “into an intelligible form intended for human inspection,” not as they pass through NSA listening posts and transferred to data warehouses.

Complicating matters is the senseless scenario made up for the questioning by Congress, which makes it difficult to make sense of his answers, especially since many seem very parsed, qualified, and surrounded in garbled syntax.

That scenario involved NSA targeting U.S. citizens for making fun of a President Dick Cheney for shooting a fellow hunter in the face with a shotgun, and then the fun-makers being waterboarded for their impertinence.