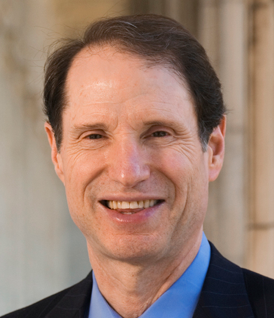 Sen. Ron Wyden (D-Oregon) says the Obama administration must secure congressional approval for the United States to participate in an international anti-piracy treaty, a position at odds with the president.

The accord, known as the Anti-Counterfeiting Trade Agreement, exports on participating nations an intellectual-property enforcement regime resembling the one in the United States. Neither the United States nor any other country has ratified the deal, which was brokered by both the President George W. Bush and the President Barack Obama administrations and finalized in October.

“I believe Congress should approve binding international agreements before the U.S. is obligated to comply with those agreements. This a point where the administration and I disagree and is particularly true on matters that impact our nation’s ability to implement policies that encourage innovation,” Wyden said in a statement.

Whether you’re on the copy-right or copy-left, Wyden’s legislative proposal (.pdf) Monday smacks at the heart of a constitutional debate about the United States’ three branches of government.

Some legal scholars suggest that Congressional approval is necessary because the accord binds the United States to stay in line with its current intellectual-property legal framework. (Financial penalties of up to $150,000 an infringement are authorized in U.S. civil lawsuits.)

“It’s a huge deal whether Congress signs it or not,” said Sean Flynn, an American University, Washington College of Law intellectual-property scholar.

The reason it is a big deal, because this is what this agreement does, it tells domestic legislatures what its law must be or not be. These type of agreements are the most important to go through legislative approval and go through a public process and commenting on what the norms are of that agreement. The reason, it locally restricts what the democratic process can do.

For instance, the treaty demands that participating nations set statutory damages at a level to deter infringement.

Any proposal to alter the Copyright Act’s $150,000 penalty per infringement in the United States, for example, “could rise to an international dispute,” Flynn said.

ACTA is not yet in force. Six nations must approve of the deal before it becomes law among those signatories.

“U.S. negotiators were careful to ensure that the ACTA is fully consistent with U.S. law,” Kirk wrote (.pdf) Wyden in December. “For that reason, Congress will not need to enact legislation in order for the United States to implement the agreement.”

The accord demands that participating governments make it unlawful to market devices that circumvent copyright, such as devices that copy encrypted DVDs without authorization. That is akin to a feature in the the Digital Millennium Copyright Act in the United States, where the law has been used by Hollywood studios to block RealNetworks from marketing DVD-copying technology.

The deal also calls on participating nations to maintain extensive seizure and forfeiture laws when it comes to counterfeit goods that are trademarked or copyrighted. Most important, countries must carry out a legal system where victims of intellectual property theft may be awarded monetary damages.