More than 40 people were arrested on Wednesday in Canada in a sting operation against what authorities say was a well-organized international bank card ring that stole at least $7 million and possibly hundreds of millions more.

Police conducted about 60 early-morning raids throughout Montreal and Ontario on what are believed to be three cells of criminals consisting of ringleaders, technicians and money runners, according to news reports.

Police said the group, based out of Montreal, operated in a coordinated fashion with military precision, doling out cloned cards to runners in lock boxes.

One part of the gang was responsible for installing skimming devices on ATMs and for seizing point-of-sale machines (POS) from restaurants and retailers in order to install sniffers on them before returning them to the businesses.

Police said the thieves took the POS machines to cars, vans and hotel rooms, where technicians hacked into the processors and rigged them so that card data could be siphoned from them remotely using Bluetooth. The modifications took only about an hour to accomplish, after which the devices were returned to the businesses before they re-opened the next day. The ring is believed to have had inside help from employees who took bribes to look the other way.

Account numbers and PINs from the cards would be encoded to blank cards, which others would then use to conduct a massive and coordinated run against banks. 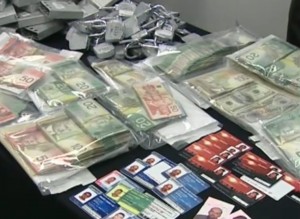 According to police, the ring would send about two dozen runners to ATMs in the early morning hours with lockboxes containing about half a dozen cloned cards each. The runners would stand by for a call from a ringleader, who would supply a combination code to access the lockbox. Then the runners would use the cards to swiftly siphon money from the accounts before fleeing.

In one such attack, the thieves used 79 fraudulent cards to make 203 transactions at 23 different bank machines, allowing them to abscond with $30,000 in just five minutes.

“This went on once, twice, three times a day. It went on maybe four or five times a week,” Royal Canadian Mounted Police Sgt. Yves Leblanc told the Globe and Mail.

Authorities say they have proof that at least $7.7 million was stolen but say the potential fraud losses from the ring were $100 million.

Police seized more than 12,000 counterfeit bank cards during the raids, as well as some 200 POS terminals and about $120,000 in Canadian and U.S. currency. Mobile phones, vehicles and weapons were also seized in the busts.

The ring had accomplices in Vancouver, as well as in Australia, New Zealand, Malaysia, Tunisia and England. Arrest warrants have been issued for 61 people, but only 47 have been arrested so far. The busts were the result of a four-year investigation that began in 2008.