Assange Loses Appeal, But Granted Stay to Apply to Re-Open Case on Technicality 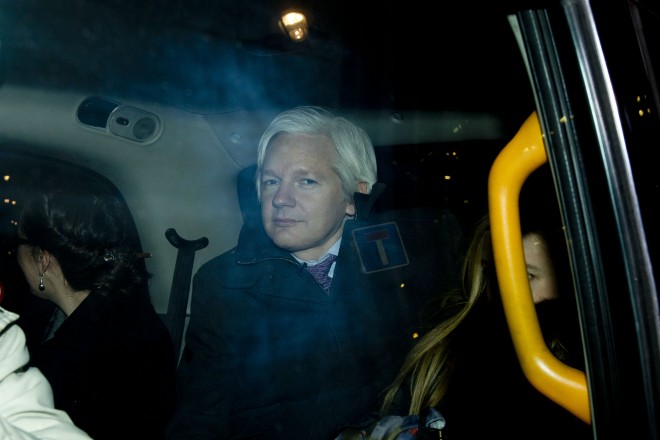 WikiLeaks founder Julian Assange is driven away in a taxi after leaving his hearing at the Supreme Court in London, Thursday, Feb. 2, 2012. Sweden's public prosecutor was right to demand the return of Julian Assange, a lawyer told Britain's Supreme Court Thursday, saying that failing to hand over the WikiLeaks chief would break with precedent and wreck European extradition rules. Photo: Matt Dunham/AP

WikiLeaks founder Julian Assange lost his Supreme Court extradition appeal on Wednesday, and an order to extradite him to Sweden to face sex crimes allegations was upheld.

But his lawyers were also granted a 14-day stay on the judgment while they consider applying to re-open the case on a technicality. One of his attorneys asserted that the Vienna Convention on Law of Treaties had not been argued by attorneys in the case and therefore should be re-opened. The attorney asked the court for two weeks to prepare an application to re-open the case, which the court granted.

Assange, who has been under house arrest for a year and a half, asked the Supreme Court last February to overturn an order extraditing him to Sweden on grounds that the European arrest warrant issued against him by the Swedish Prosecuting Authority was invalid because the Swedish prosecutor behind it was “working for the executive” and was therefore not a proper judicial authority, as the law requires.

But the seven Supreme Court justices ruled 5-2 that the prosecutor was a valid authority.

Assange lost his initial fight against extradition last year, but appealed it before a High Court. That court rejected his appeal last November.

He then appealed to the Supreme Court earlier this year. In order to do so, his attorneys had to show that his case related to a matter of public importance that went beyond Assange. The case was viewed as significant because if the justices ruled that the Swedish prosecutor was not a valid authority for requesting an arrest warrant, it would have called into question other extradition cases in the United Kingdom and elsewhere in Europe.

Assange will be able to remain in he United Kingdom for the next two weeks while his attorneys work out the details of his application to reopen the case.

Assange has not been charged with any crime in Sweden. He is being sought for questioning in Sweden on rape and coercion allegations stemming from sexual relations he had with two women in that country in August 2010. One woman has claimed that Assange pinned her down to have sex with her and intentionally tore a condom he wore. The second woman claims that he had sex with her while she was initially asleep, failing to wear a condom despite repeated requests for him to do so. Assange has denied any wrongdoing, asserting that the sex in both cases was consensual.