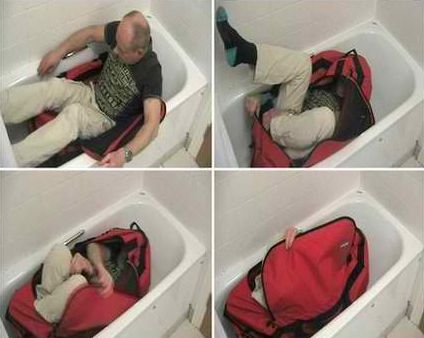 Expert witness Peter Faulding demonstrated in a video how he had tried and failed 300 times to lock himself in a sports bag similar to the one in which an MI6 codebreaker's body was found.

A top British codebreaker whose naked body was found in a sports bag in his bathtub in 2010 was likely killed by suffocation or poisoning in a “premeditated criminal act,” according to a coroner who delivered her verdict at the end of a seven-day inquest.

Coroner Fiona Wilcox said that Gareth Williams’ death will likely never be fully explained, but that murder by an intelligence agency or intelligence colleague could not be ruled out. She said that there was no evidence to support claims that Williams’ death was linked to his interest in bondage and speculated that such assertions might be an attempt by some to influence and manipulate the investigation.

Wilcox also criticized the police and MI6 for their handling of the death and investigation, noting that MI6 was late in submitting evidence to police and prevented them from speaking with Williams’ colleagues directly.

Testimony presented at the inquest showed that MI6, the spy agency with which Williams was contracted at the time of his death, failed to adequately check up on him despite his failure to show up for work for several days, and that by the time Williams was finally reported missing after seven days, his body had badly decomposed, thwarting efforts to determine a cause of death. Testimony also revealed that it was only this week that the spy agencies gave investigators nine thumb drives that had been found at Williams’ workplace.

Wilcox told the court that the testimony of Williams’ MI6 manager about why Williams’ absence from work raised little concern stretched the “bounds of credibility.” She also said that while it appeared unlikely that British spy agencies played a role in the coder’s death, it was still a “legitimate line of inquiry” for the investigation.

Family and friends testified that Williams was unhappy with his work environment at MI6 and felt he didn’t fit in with his colleagues. He was on contract with MI6 for three years, but had requested to be released from it after a year to return to Government Communications Headquarters (GCHQ).

During the inquest, testimony revealed that the coder had conducted unauthorized searches on an MI6 database that could have put him at risk if he was discovered. Investigators said, however, that MI6, Britain’s top spy agency, was unaware that Williams had conducted the searches.

Williams, who was 31 at the time he died, was found inside a North Face nylon sports bag in the bathtub of his apartment in August 2010. His nude body was in the fetal position with his arms folded across his chest. The bag was closed with a padlock, and two keys to the padlock were found underneath Williams’ body inside the bag.

Investigating the possibility that Williams had placed himself in the bag, an expert witness testified that he attempted 300 times to lock himself inside a similar sports bag in a bathtub, and was unable to do so.

“I couldn’t say it’s impossible, but I think even Houdini would have struggled with this one,” expert Peter Faulding told the court.

It’s believed that Williams was alive, and likely unconscious, when he was placed in the bag or was placed in it shortly after death before rigor mortis had set in. His mobile phone and a number of SIM cards were laid out on a table near the body, according to news reports. The phone had been restored to its factory settings. There were no signs of forced entry to the apartment and no signs of a struggle.

The coroner said she was sure that a third party had moved the bag containing Williams’ body into the bathtub, noting that it was “significant” that no hand or footprints were found in the bathroom.

Williams was described by those who knew him as a “math genius” and worked for GCHQ in the United Kingdom, helping to break coded Taliban communications, among other things. He was just completing a year-long stint with MI6, Britain’s secret intelligence service, and was looking forward to returning to GCHQ when his body was found.

Williams had worked with the NSA and British intelligence to intercept e-mail messages that helped convict would-be bombers in the U.K. He had made repeated visits to the U.S. to meet with the National Security Agency and worked closely with British and U.S. spy agencies to intercept and examine communications that passed between an al Qaeda official in Pakistan and three men who were convicted in 2009 of plotting to bomb transcontinental flights, according to British news reports.

Williams flew up to four times a year to the U.S. to the NSA’s headquarters at Fort Meade HQ. His uncle, Michael Hughes, told the British paper the Mirror that Williams would mysteriously disappear for three or four weeks.

“The trips were very hush-hush,” Hughes said. “They were so secret that I only recently found out about them – and we’re a very close family. It had become part of his job in the past few years. His last trip out there was a few weeks ago, but he was regularly back and forth.”

He is believed to have returned from a trip abroad on August 11, 2010. He was last seen alive on August 15, eight days before his body was found.

Investigators, however, said they have ruled out that Williams’ death was related to his work, although they have not revealed how they arrived at this conclusion.

There were rumors leaked to the press that the coder’s death had to do with sexual play. The browser history on Williams’ computer and one of his phones showed that he had visited bondage sites, and former landlords testified that they once found the coder tied to his bed wearing only boxing shorts. He told them he had just been “messing around” and had tied the bindings too tightly. Investigators also found more than $30,000 worth of women’s designer clothes and accessories in his apartment, as well as a woman’s brightly colored orange wig.

But the coroner said it was “highly unlikely” that sadomasochism or other sexual play had a role in Williams’ death, and investigators said there was no indication that he had anything more than a passing interest in bondage. Friends also said that the women’s clothes found in his apartment were likely gifts for a fashion designer friend and others, although they were in sizes that would have fit Williams. There was also indication that the wig and some of the clothes may have been for a costume party.