Twitter Hits Back at Court, Prosecutors Over ‘Occupy’ Order 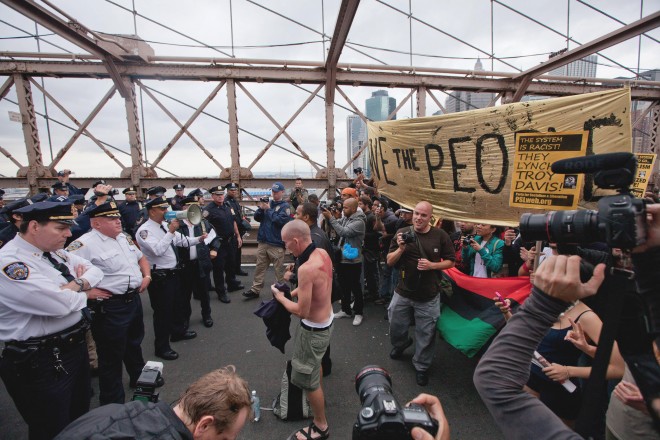 In the battle to fight online fishing expeditions by law enforcement officials there is little we can do individually to protect ourselves — which makes it all the more important for internet companies like Twitter and Google to fight back on our behalf.

That’s exactly what Twitter did when it filed a surprisingly feisty motion (.pdf) this week in New York City Criminal Court to quash a court order demanding that it hand over information to law enforcement about one of its account holders — an activist who participated in the Occupy Wall Street protests — as well as tweets that he allegedly posted to the account over a three-month period. The company stepped in with the motion after the account holder lost his own bid to quash the order.

In its motion to quash, Twitter pointed out to the judge that the order would essentially force the company to break the law by handing over data without a warrant. Twitter also took issue with the judge’s ruling that the account holder had no right to fight the order on his own behalf.

The company further dinged prosecutors by pointing out that they could have saved everyone the trouble of dealing with this in court if they had simply printed or downloaded the publicly available tweets themselves.

“This is a big deal,” wrote Senior Staff Attorney Aden Fine. “If Internet users cannot protect their own constitutional rights, the only hope is that Internet companies do so.”

Last January, the government, in an investigation of Malcolm Harris, asked Twitter to hand over all tweets posted to the account of @destructuremal between Sept. 15 and Dec. 31 last year, as well any information Twitter had about the owner of the account, including his e-mail address.

Harris was arrested last October for disorderly conduct during a protest that was conducted on the Brooklyn Bridge.

Prosecutors sought tweets made to the account “to refute the defendant’s anticipated defense, that the police either led or escorted the defendant onto stepping onto the roadway of the Brooklyn Bridge.” They sought the information using a 2703 order, which allows authorities to obtain data without a warrant under the Stored Communications Act, or SCA.

More powerful than a subpoena, but not as strong as a search warrant, a 2703(d) order is supposed to be issued when prosecutors provide a judge with “specific and articulable facts” that show the information they seek is relevant and material to a criminal investigation. The people targeted in the records demand, however, don’t have to themselves be suspected of criminal wrongdoing.

The Justice Department used the same type of order in December 2010 to demand information from Twitter about several people associated with the secret-spilling site WikiLeaks as part of a secret grand jury investigation. Twitter fought back in that case as well.

After Twitter received the demand for information about Harris’s account, the company notified Harris, who decided to fight it.

But on Apr. 20, Judge Matthew A. Sciarrino, Jr., denied Harris’s motion to quash the subpoena, saying that he had no standing to fight the order because he had “no proprietary interests” in the account holder’s information or in the tweets. To back this assertion, the judge quoted from Twitter’s terms of service agreement stating that account holders granted Twitter “worldwide, non-exclusive” right to use use, copy, or display the content. Since the defendant granted this license to Twitter by agreeing to the terms of service, this “demonstrates a lack of proprietary interests in his Tweets,” the judge wrote.

The judge also rejected Fourth Amendment protections Harris claimed, because the judge said that online content stored on a third-party server was not physical and therefore did not have the same privacy protections that applied, for example, to a home. Particularly when that data was published online where the public could see it.

While the Fourth Amendment provides protection for our physical homes, we do not have a “physical home” on the Internet,” the judge wrote. “What an internet user simply has is a network account consisting of a block of computer storage that is owned by a network service provider. As a user, we may think that storage space to be like a ‘virtual home,’ and with that strong privacy similar to our physical homes. However, that ‘home’ is a block of ones and zeroes stored somewhere on someone’s computer.”

Where Harris’s role in the fight ended, Twitter picked it up.

The company pointed out to the judge that in rejecting Harris’s standing to oppose the order, he had selectively quoted the company’s terms of service, leaving out one important part. It was true that in agreeing to the terms of service Harris granted Twitter the right to publish his Tweets, but the terms of service also stated that users “retain your rights to any Content you submit, post or display on or through” Twitter.

To hold that users do not have a proprietary right in their tweets “imposes a new and overwhelming burden on Twitter to fight for its users’ rights, since the Order deprives its users of the ability to fight for their own rights when faced with a subpoena from New York State,” Twitter wrote.

“Specifically, the SCA has been held to violate the Fourth Amendment to the U.S. Constitution to the extent it requires providers to disclose the contents of communications in response to anything less than a search warrant, … and the Fourth Amendment’s warrant requirement applies even when the government seeks information about allegedly public activities,” Twitter wrote.

Twitter also noted that per the SCA, a 2703 order can only compel a provider to produce content that is more than 180 days old, which would discount many of the tweets the government is requesting that will not be that old for a number of months.

Finally, Twitter argued that because the company is located in California, New York prosecutors needed to obtain a California subpoena to seek the data.