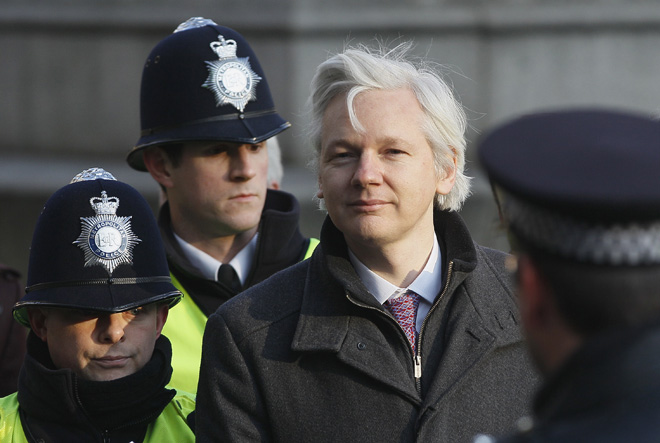 WikiLeaks founder Julian Assange has been ordered to return to Sweden to face sex-crimes allegations after the Supreme Court in the United Kingdom rejected a bid to re-open his appeal case there. But the judges have given him a two-week reprieve before extradition proceedings will begin, saving him from being immediately ejected from the country.

Seven judges unanimously dismissed his request, according to the BBC, saying it was without merit.

Two weeks ago the Supreme Court rejected Assange’s appeal of the extradition on grounds that the Swedish arrest warrant was invalid. At a hearing announcing that decision, Assange’s attorneys requested they be allowed to re-open the appeal on a technicality, saying the judges had made their decision based on a point that they had not been given an opportunity to argue in court.

The court granted Assange a stay until his attorneys could submit their bid, which they did this week. The judges immediately dismissed it on Thursday. Authorities will have 10 days to return him to Sweden once the two-week reprieve has finished.

Assange failed to make an appearance at the hearing two weeks ago. According to reports on Twitter from people who had spoken with him that morning, he said he was caught in traffic.

Assange’s defense team has claimed that the Swedish government is acting on behalf of the U.S. to extradite Assange to Sweden so that he could be further extradited to the US to face criminal charges related to WikiLeaks’ publication of thousands of documents from the Afghan and Iraq wars as well as US diplomatic cables.

But UK prosecutor Clare Montgomery, who was in an early court proceeding representing Swedish authorities, said that if the US requested extradition of Assange from Sweden, UK authorities would have to consent.

Assange has one last stab to fight the extradition to Sweden. He can petition the European Court of Human Rights in Strasbourg, but must do so by June 28. But merely petitioning that court won’t prevent him from being extradited to Sweden.

Assange lost his initial fight against extradition last year, but appealed it before a High Court. That court rejected his appeal last November.

He then appealed to the Supreme Court earlier this year. In order to do so, his attorneys had to show that his case related to a matter of public importance that went beyond Assange. The case was viewed as significant because if the justices ruled that the Swedish prosecutor was not a valid authority for requesting an arrest warrant, it would have called into question other extradition cases in the United Kingdom and elsewhere in Europe.

Assange will be able to remain in the United Kingdom for the next two weeks while his attorneys work out the details of his application to reopen the case.

Assange has not been charged with any crime in Sweden. He is being sought for questioning in Sweden on rape and coercion allegations stemming from sexual relations he had with two women in that country in August 2010. One woman has claimed that Assange pinned her down to have sex with her and intentionally tore a condom he wore. The second woman claims that he had sex with her while she was initially asleep, failing to wear a condom despite repeated requests for him to do so. Assange has denied any wrongdoing, asserting that the sex in both cases was consensual.