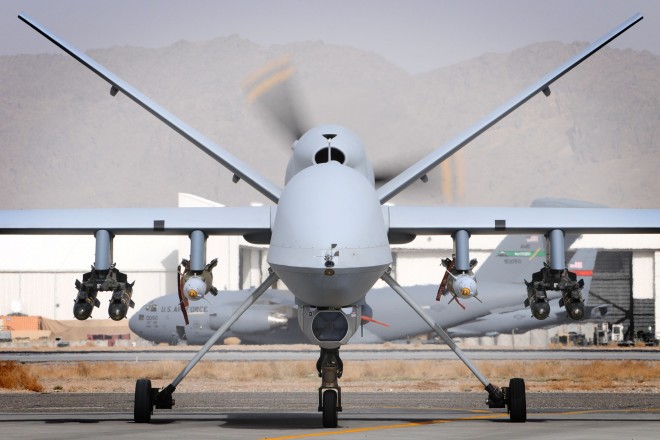 Armed MQ-9 Reaper drones like this one are used by both the US military and the CIA. Photo: USAF

The Central Intelligence Agency continues to refuse to confirm or deny the covert military use of drones to kill suspected terrorists overseas, despite President Barack Obama’s and even a former CIA director’s admission of the agency’s targeted killing program.

Despite numerous public comments on the CIA’s drone attacks in far-flung locales such as Yemen from various government officials, including former CIA Director Leon Panetta and President Obama, the CIA is taking the position in court that it would have to eliminate you with one of its drones if it acknowledged the program.

So on Wednesday, the American Civil Liberties Union asked a federal appeals court to expedite a hearing (.pdf) on its Freedom of Information Act request seeking details of the drone program. Hours later, the US Court of Appeals for the District of Columbia Circuit set a September 20 oral argument. (.pdf)

The development comes as 26 members of Congress asked Obama, in a letter, to consider the consequences of drone killing and to explain the necessity of the program. The use of drones to shoot missiles from afar at vehicles and buildings that the nation’s intelligence agencies believe are being used by suspected terrorists began under the Bush administration and was widened by Obama to allow the targeting of American citizens. Drone strikes by the Pentagon and the CIA have sparked backlashes from foreign governments and populations, as the strikes often kill civilians, including women and children.

The FOIA litigation, meanwhile, dates to 2010, when the ACLU sued in federal court seeking records concerning the legal basis for carrying out targeted drone killings; any restrictions on those who may be targeted; any civilian casualties; any geographic limits on the program; the number of targeted killings that the agency has carried out; and the training, supervision, oversight, or discipline of drone operators.

A federal judge sided with the agency’s so-called “Glomar” response which said that it would neither confirm nor deny the existence of responsive records because doing so would expose national security secrets. The same appeals court that set the September drone hearing had last month upheld the National Security Agency’s decision, citing Glomar, to withhold from the public documents confirming or denying any relationship it has with Google concerning encryption or cybersecurity.

In the drone litigation, the ACLU appealed, citing a bevy of public comments (.pdf) by government officials that the rights groups maintains amounts to a government acknowledgment of a CIA drone program. One quote the ACLU submitted was from then-CIA Director Leon Penetta, who spoke frankly to ABC News after a 2010 drone strike had killed al-Qaeda’s third in charge:

“But having said that, the more we continue to disrupt al-Qaeda’s operations, and we are engaged in the most aggressive operations in the history of the CIA in that part of the world, and the result is that we are disrupting their leadership. We’ve taken down more than half of their Taliban leadership, of their Al Qaida leadership. We just took down number three in their leadership a few weeks ago.”

Last year, Obama acknowledged particular CIA drone strikes at a Joint Chiefs of Staff ceremony. Within hours of the CIA drone strike that killed U.S. citizens Anwar al-Awlaki and Samir Khan in Yemen, the president publicly lauded the move as “another significant milestone in the broader effort to defeat al-Qaeda and its affiliates” and then acknowledged the U.S. government’s role, stating that “this success is a tribute to our intelligence community.”

Mike Scarcella, at the Blog of Legal Times, points out that Catherine Hancock, the government’s lawyer in the case, told the appellate court in a filing that it should reject the ACLU’s attempt “to cobble together an official CIA acknowledgment by combining together the substance of various news reports, unofficial statements and imprecise statements by former CIA Director (Leon) Panetta and President Obama.”

What’s more, Hancock added some doublespeak into the argument, (.pdf) writing that,”even if there is speculation about a fact, unless an agency officially confirms that fact, the public does not know whether it is so.”

Try telling that to the family of Anwar al-Awlaki and his son, America citizens killed by the CIA on the secret orders of the President, with no due process.