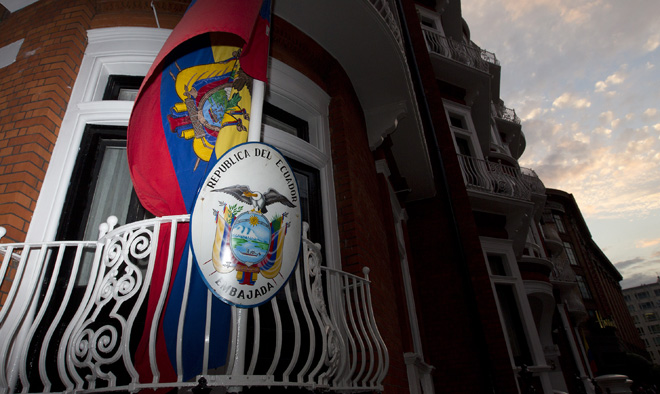 A general view of the Embassy of Ecuador in London Tuesday, June 19, 2012. Embattled WikiLeaks chief Julian Assange took refuge Tuesday in Ecuador’s embassy in London and is seeking political asylum, his organization and the South American nation’s foreign minister said. Foreign Minister Ricardo Patino said the leftist government of President Rafael Correa was weighing the request. He did not indicate when a decision might be made. (AP Photo/Alastair Grant)

As police stand guard outside the Ecuadorian embassy in London, the Latin American government is expected to decide today whether it will grant WikiLeaks founder Julian Assange asylum to prevent him from being extradited to Sweden.

Authorities in the UK said on Wednesday that they had met with the Ecuadorian ambassador to the UK, Anna Alban, and had had an “amicable” conversation with her about the issue.

“She got an understanding of our legal position and we gained an understanding of theirs,” a spokesman told the Guardian. “It is our understanding overnight that they are minded to reach a view in Quito today [on the asylum request], or in the very near future. There is no reason to believe that all this was anything other than a surprise to them, and they are dealing with an unprecedented set of circumstances.”

Ambassador Alban said in statement posted to the embassy’s website that Ecuador would “take into account Ecuador’s long and well-established tradition in supporting human rights” but said she emphasized to UK authorities that “it was not the intention of the Ecuadorean government to interfere with the processes of either the UK or Swedish governments.”

Assange appeared in person at the Ecuadorian embassy in London on Tuesday seeking asylum to avoid being extradited to Sweden for questioning on sex crimes allegations.

Assange asserted that Australia, his native country, appeared to have no plans to protect him, which put him in a state of “helplessness,” according to a statement from Ecuador’s foreign ministry at the time. For this reason, he sought Ecuador’s protection through political asylum. His attorneys have asserted that the Swedish investigation is a ruse so that Assange can be further extradited from that country to the U.S. where he could face criminal charges for publishing thousands of U.S. State Department cables and other government documents. His lawyers have claimed that Assange would face the death penalty in the U.S. if extradited there.

Ecuador’s foreign minister, Ricardo Patino, said on Twitter that in evaluating Assange’s asylum request, his ministry is “studying the risk claimed by Assange that he would be face a politically motivated trial and could be sentenced to death.”

Metropolitan police have been stationed outside the embassy, waiting to arrest Assange if he leaves the premises. The Ecuadorian embassy enjoys diplomatic immunity and while there, Assange is beyond the reach of police. If he leaves the premises, however, he will no longer be protected by diplomatic immunity. Even with his asylum granted, UK police can stop the vehicle or helicopter he would be traveling in to get him out of the country.

Foreign Office diplomats told the Guardian that this appeared to be the first time someone had taken refuge in an embassy in London seeking political asylum in another country.