In Flawed, Epic Anonymous Book, the Abyss Gazes Back 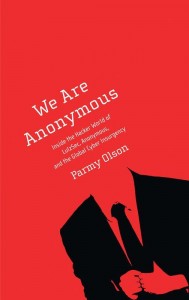 It’s hard to report on Anonymous.

It’s a non-organization of pranksters-turned-activists-turned-hackers-turned-hot-mess-of-law-enforcement-drama — a story that is hard to get, and hard to write.

To work with a secretive and hunted group requires making many non-obvious choices. One of the unnamed but extensively quoted hackers in Forbes London bureau chief Parmy Olson’s new book on the group, titled We Are Anonymous, told me once that anons were “by nature deceptive” — and they are. (How do I know it’s the same person? I recognized their way of talking. Then I asked.)

Anons lie when they have no reason to lie. They weave vast fabrications as a form of performance. Then they tell the truth at unexpected and unfortunate times, sometimes destroying themselves in the process. They are unpredictable. The nihilistic fury that Olson describes in the lifestyle of young anons goes in every direction, including inward, and it often spills over onto people like Olson and me for no obvious reason.

You can’t follow the money in Anonymous, or look at the power structures, or hunt for a greater rationale in a collective that on most days doesn’t have one. But we still have to make the choice about what we believe, why, and how it fits into a larger picture. We use circumstances, gut instincts, and plenty of what hackers call social engineering to tease out the evidence we need to write about the collective, to fulfill our role in the story.

Make no mistake, we have a role. You just can’t not join. It’s impossible to not be part of the thing, when the thing uses the media to talk to itself.

So what makes Parmy Olson’s We Are Anonymous so frustrating is that it plays the narrative straight, as if these issues don’t exist at all.

The only voices in Olson’s book are those of the small groups of hackers who stole the limelight from a legion, defied their values, and crashed violently into the law.

But Olson and I, like professor Biella Coleman and former CNN correspondent Amber Lyon, documentary filmmaker Brian Knappenberger, and even Gawker’s Adrian Chen, cannot avoid shaping the thing and having it shape us. We are the medium the collective uses to define itself, and we end up owning some of what it becomes. We are, no matter what rules we’ve set up to avoid it, an organ of the Hive Mind. It is Schrödinger’s media landscape, and our observations always affect the outcome.

For this reason it’s vital that we expose our methods and internal rules. Who do we name, and more importantly, who do we not? I avoided this particular ethical issue by publicly refusing to name anyone who is not, as they say in Anonymous, namefagged already. Olson plunges through hundreds of pages without even a nod in the issue’s direction.

How has Olson chosen who she trusts and when? Her methods are hidden, her notes not referenced in the text, and she appears nowhere in her book. While that’s a traditional choice for journalism, in this strange case it harms Olson’s credibility. In an environment where all your sources lie to you, you must tell the world how you came to believe the story you’re telling.

The social systems of the internet, of which Anonymous is a highly evolved example, disrupt the established pathways of consequence. Instead of looking for the expert or person in charge for quotes, the heart of the story may be almost anywhere. Searching for the right source in Anonymous is often more like investigating a murder than crawling up the chain of command looking for an interview.

Anonymous made us, its mediafags, masters of hedging language. The bombastic claims and hyperbolic declarations must be reported from their mouths, not from our publications. And yet still we make mistakes and publish lies and assumptions that slip through. There is some of this in all of journalism, but in a world where nothing is true and everything is permitted, it’s a constant existential slog. It’s why there’s not many of us on this beat.

Journalism is part of a world of institutions, hierarchies, and social traditions codified by nation states and organizations. We create laws and rules to control who gets to do things that matter, so we can concentrate power where we want it. It’s meant to create a predictable world we can inhabit within Nature’s capricious grasp. The tools of journalism were built for this world, it’s what shaped our rhetoric and narrative. It’s partly why we’re always so keen on printing people’s titles, or age, or race, placing them within a hierarchy, telling you how important they are. The techniques of contemporary journalism are the Big Man theory of history, writ small and fast.

Anonymous breaks all that, and it’s a huge headache. But for reporters who had to file stories on the group, the rise of Lulzsec, an exclusive club of hacker elites that acted just like the normal world from within the larger collective, was a godsend. It finally provided a fast way to tell an outrageous and popular story, and we responded with predictable enthusiasm.