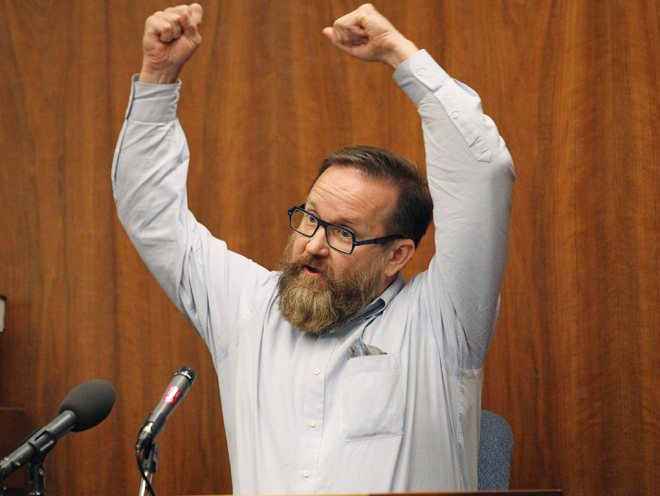 John Brennan, the man who stripped at Portland International Airport to protest TSA screeners, is shown as he testifies during his trial Wednesday, July 18, 2012, in Portland, Oregon. Photo: Rick Bowmer/AP

An Oregon man was cleared of indecent exposure charges Wednesday when a local judge said his protest of Transportation Security Administration screening procedures was constitutionally protected speech under state law.

John Brennan, a 50-year-old technology consultant, was charged with the infraction after taking his clothes off at Portland International Airport in April, on a way to a business trip to San Jose.

“I was mostly motivated by the absurdity of it all. The irony that they wanna see me naked. But I don’t get to take my clothes off?” he said after being cleared.

The incident began when Brennan refused to go through the so-called “nude” scanners and instead opted for a pat-down. A TSA officer detected nitrates on his gloves after the pat down. Nitrates are used in explosives.

That, Brennan said, was the last straw. He took his clothes off and proceeded through the checkpoint. He was subsequently arrested.

Multnomah County Circuit Judge David Rees said nudity laws don’t apply when it comes to protest. “It is the speech itself that the state is seeking to punish, and that it cannot do,” Rees said from the bench. 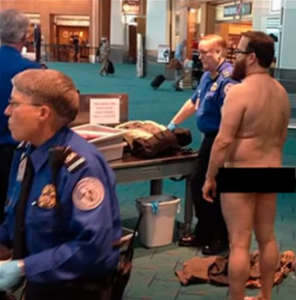 In an unrelated case, a 21-year-old Virginia man was arrested last year at an Richmond International Airport screening checkpoint after he began removing clothing to display on his chest a magic-marker protest of airport security measures. He had the Fourth Amendment written on his body. He sued. The case was largely dismissed, and is on appeal.

In 2006, however, the TSA reluctantly conceded that the screening area remained open to free speech so that fliers could wear slogans on their shirts, or even put them on their toiletry bags.

“There is no policy that restricts passengers from expressing their opinion as long as they are not threatening,” the TSA said.