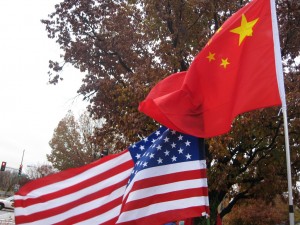 The FBI has launched an investigation into allegations that a top Chinese maker of phone equipment supplied Iran with U.S.-made hardware and software, including a powerful surveillance system, in violation of federal laws and a trade embargo, according to The Smoking Gun.

Investigators, who began their probe earlier this year, have also found evidence that the company planned to obstruct a Department of Commerce inquiry into the contract behind the sales.

Last March, Reuters reported that the Chinese firm had sold the Telecommunications Company of Iran (TCI) a powerful surveillance system as part of a $130 million contract in 2010 and that the equipment was capable of monitoring landline, mobile and internet communications.

According to a non-public FBI affidavit obtained by The Smoking Gun, after Reuters broke the news about the sale of equipment to Iran, ZTE lawyers went into panic mode and allegedly began hatching a plot to shred documents and alter records to cover up the illegal transactions.

ZTE designs and manufactures fixed and mobile communications and is the second largest maker of telecommunications equipment in China.

TCI, which is jointly owned by the Iranian government and a consortium of private entities, has a near-monopoly over Iran’s landline phone and internet services.

Mahmoud Tadjallimehr, a former telecommunications project manager in Iran, told Reuters that the ZTE monitoring system was “countrywide” in Iran and was “far more capable of monitoring citizens than I have ever seen in other equipment” Iran had purchased. He said the system could be used to intercept voice calls, text messaging, e-mails and chats, as well as to locate users.

Inside information about ZTE’s alleged plan to cover up its illegal activity came from a whistleblower named Ashley Kyle Yablon who spoke to the FBI and allowed the agency to copy files from his work computer in the course of their investigation, according to The Smoking Gun. Yablon is a 39-year-old attorney who was hired as general counsel by ZTE’s U.S. subsidiary in Dallas last October. He came to the company from a ZTE rival firm, Huawei Technologies.

Yablon, who still works for ZTE, was exposed as a whistleblower only after The Smoking Gun published the FBI affidavit on Thursday. He told investigators that after the Reuters story published, he saw a copy of the contract for the sale of the surveillance system to Iran and told investigators that it “essentially described how [ZTE] would evade the U.S. embargo and obtain the U.S.-manufactured components specified in the contract for delivery.”

He also told the FBI that he believed ZTE had set up a company named 8 Star Beijing solely to buy “U.S.-made goods subject to the U.S. embargo,” as well as another firm named ZTEC Parsian whose job was to “integrate the equipment for delivery to and installation in Iran.” He learned that the company planned to tell investigators that the equipment either had never been shipped to Iran and was still in warehouses or had been shipped to non-embargoed countries.

When Yablon was told about the alleged plan to coverup ZTE’s dealings, he told the company that he would resign rather than participate in a coverup and was later cut out of internal discussions about the issue.

Several of the U.S. companies whose products were allegedly sold to Iran told Reuters that they were unaware of the sales and were investigating their partnership with ZTE.

An FBI spokeswoman in Dallas declined to comment. ZTE did not immediately respond to a call for comment.

According to the Journal, Nokia Siemens Networks — a Finland-based joint venture between Nokia and Siemens — provided Iranian authorities with the ability to conduct deep-packet inspection of online communications to monitor the contents and track the source of e-mail, VoIP calls and posts to social networking sites such as Twitter, Myspace and Facebook. The newspaper also said authorities had the ability to alter content as it intercepted the traffic from a state-owned internet choke point.

A spokesman for Nokia Siemens Networks, later told Threat Level that although the company had sold equipment to Iran, the system was incapable of conducting deep-packet inspection of internet communications — or conducting any internet surveillance at all. The company said it installed a cellphone network in Iran, and like all modern telecom switches, the equipment included capability that allows the government to conduct wiretaps of telephone calls made from targeted numbers.

Telecommunication companies in the United States and other countries are required to provide so-called “lawful intercept” capability so that domestic law enforcement agencies can eavesdrop on calls to investigate criminal activity. In the United States, however, such interception generally requires a court order.