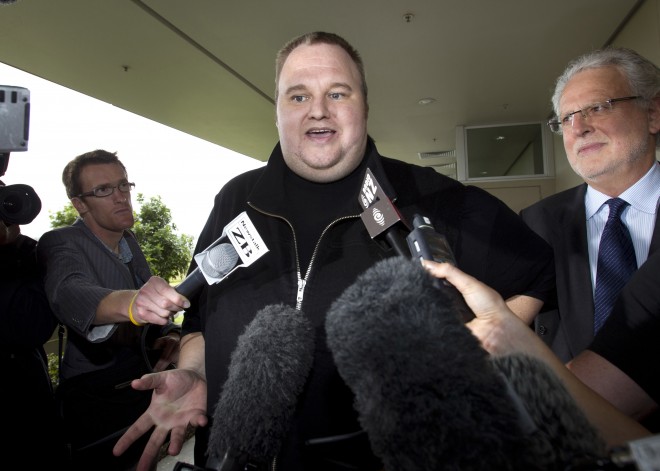 In this Feb. 22, 2012 file photo, Kim Dotcom, the founder of the file-sharing website Megaupload, comments after he was granted bail and released in Auckland, New Zealand. The U.S. wants to extradite Dotcom from New Zealand, but his extradition hearing won’t be held until March 2013, 13 months after he was arrested. AP Photo/New Zealand Herald, Brett Phibbs, File

Originally, the hearing was scheduled for August 6 this year, about six months after Dotcom’s home was raided in January, but a series of legal complications have pushed that date forward.

These include a High Court judge invalidating the warrants for seizing Dotcom’s property and funds — thus making the armed raid at dawn illegal. The judge also declared that the FBI shipping cloned hard drive images taken at the raid was unlawful, thanks to the warrants used being too broad and general.

Dotcom and his associates, who are now free on bail, face extradition to the United States, after being accused of conspiring to commit large-scale copyright infringement to the tune of $500 million. If convicted, they face 20-year prison sentences and million-dollar fines.

All the accused deny they were part of a conspiracy to commit copyright infringement, saying that Megaupload was a legitimate site for sharing files and that they complied with U.S. companies’ takedown notices, despite being a foreign corporation.

Kim Dotcom didn’t respond to Wired’s request for comment on the postponed extradition hearing, but on Twitter, accused the United States of “dirty delay tactics.”

Dotcom also railed against New Zealand Prime Minister John Key for refusing him due process and a fair defence, as he is entitled to as a permanent resident of the South Pacific nation.”>“.

Dotcom also railed against New Zealand Prime Minister John Key for refusing him due process and a fair defence, as he is entitled to as a permanent resident of the South Pacific nation.
In an earlier interview with Wired.com, Megaupload’s U.S. lawyer Ira Rothken says he expects the extradition hearing to take place no matter what happens as the legal process in Virginia and New Zealand grinds on.

“Dotcom is looking forward to his day in court, to present his side of the story,” Rothken says.

A hearing in the Federal Court of Virginia before Justice O’Grady is up next in the Megaupload legal saga.

Rothken has filed motions to vacate the orders that led to the seizure of Megaupload’s domain names and servers and says he is optimistic that O’Grady will do so.

He also expects O’Grady to order a hearing around the return of legitimate data belonging to Megaupload users. The users’ data was swept up in the confiscation of Megaupload’s assets by the US authorities, which have since then refused to return it to users.

According Rothken, the data people can’t get back include business files in Microsoft Word format, as well as family photographs.

“This is the first time in U.S. history that a cloud storage company has been prosecuted for secondary copyright infringement,” Rothken says.

According to Rothken, twenty-five lawyers around the world – United States, New Zealand, Hong Kong and the Netherlands – are working on the Megaupload defense.

They are patient, Rothken says, but none have been paid yet. Rothken has applied for seized funds to be released soon to pay for Dotcom and Megaupload’s legal bills.