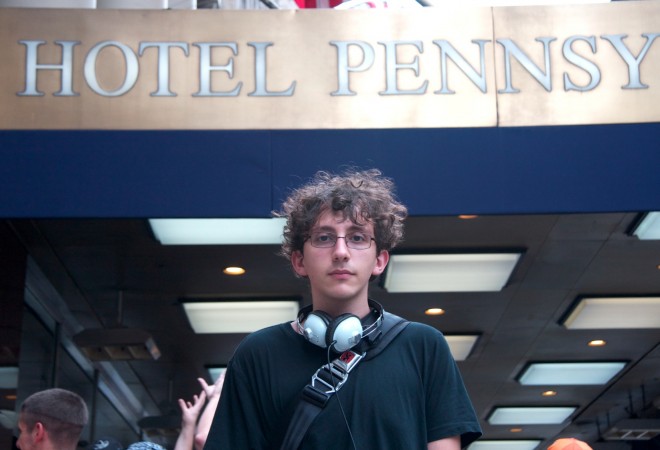 Twenty-one-year-old college student Nadim Kobeissi is from Canada, Lebanon and the internet.

He is the creator of Cryptocat, a project “to combine my love of cryptography and cats,” he explained to an overflowing audience of hackers at the HOPE conference on Saturday, July 14.

The site, crypto.cat, has a chunky, 8-bit sensibility, with a big-eyed binary cat in the corner. The visitor has the option to name, then enter a chat. There’s some explanatory text, but little else. It’s deceptively simple for a web app that can save lives, subvert governments and frustrate marketers. But as little as two years ago such a site was considered to be likely impossible to code.

Cryptocat is an encrypted web-based chat. It’s the first chat client in the browser to allow anyone to use end-to-end encryption to communicate without the problems of SSL, the standard way browsers do crypto, or mucking about with downloading and installing other software. For Kobeissi, that means non-technical people anywhere in the world can talk without fear of online snooping from corporations, criminals or governments.

“The fact that you don’t have to install anything, the fact that it works instantly, this increases security,” he explained, sitting down with Wired at HOPE 9 to talk about Cryptocat, activism and getting through American airports.

To create Cryptocat Kobeissi had to deal with controversies in computer security, usability and geo-politics.

When he flies through the US, he’s generally had the notorious “SSSS” printed on his boarding pass, marking him for searches and interrogations — which Kobeissi says have focused on his development of the chat client.

Online privacy doesn’t have a lot of corporate or governmental fans these days, but Kobeissi has faced controversy before.

“During 2010 and 2011 I was a defender of WikiLeaks and the free press in general, and I thought ‘Collateral Murder’ (the WikiLeaks publication of a controversial helicopter assault video) was a highly significant piece of journalism,” he said.

He mirrored WikiLeaks content and organized a march in support of the organization during the period in late 2010 when WikiLeaks found itself thrown off of Amazon’s hosting service and blocked by credit card companies. “I know for certain that it’s contributed to other defenders of WikiLeaks and Bradley Manning being harassed, so it’s somewhat likely that I could also be targeted.” Still, Kobeissi points out that he’s never been questioned about WikiLeaks, only about Cryptocat.

His SSSS’s can mean hours of waiting, and Kobeissi says he has been searched, questioned, had his bags and even his passport taken away and returned later. But he’s kept his sense of humor about the experience, even joking from the airport on his Twitter account.

WHAT AN SSSS FOR THE FIFTH TIME IN A ROW HOW COULD THIS HAPPEN I AM SO SURPRISED THIS IS SO SURPRISING twitter.com/kaepora/status…

The young and cheerfully sarcastic Kobeissi is somewhat baffled by the border attention. Kobeissi said that in one of his last U.S. trips through Charlotte, NC, “In total I was searched either three or four times,” — in a single visit. “Why? Do bombs materialize? I don’t understand,” he continued. If the searches, delays, and interrogations about Cryptocat are an intimidation tactic, they haven’t worked.