When Art, Apple and the Secret Service Collide: ‘People Staring at Computers’ 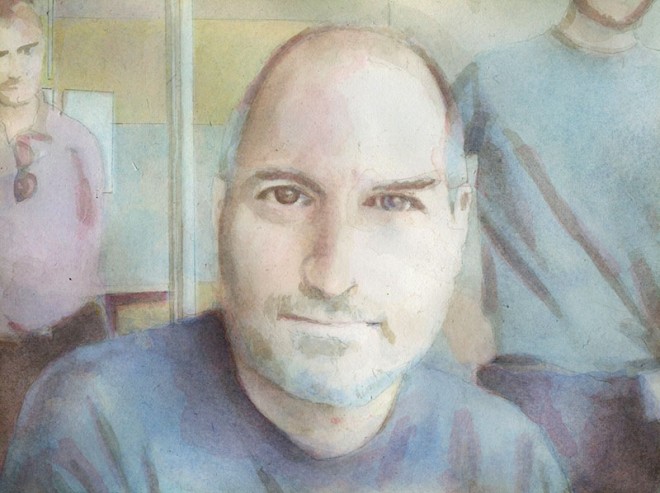 Steve Jobs, staring at the first version of Photo Booth. All watercolors courtesy of David Pierce.

Maybe an email, or a phone call from Apple. Instead, my first indication that something was “wrong” was a real-life visit from the organization best known for protecting the President of the United States of America.

They rang the doorbell a few times. It woke me up, and I tried to ignore it. There were always kids playing with the doorbells in our apartment building. But the kids don’t normally shout, “this is the Secret Service, open the door,” so I took that as my cue to get out of bed.

I cracked the door open a few inches, and an agent was already leaning into the frame. He explained that he was from the Electronic Crimes Task Force, and that they had a search warrant. Under different circumstances it could have been quite cinematic, but it was an incredibly hot summer morning in Brooklyn. I was tired, and wearing only gym shorts. I saw the two agents behind him look me up and down, and they relaxed.

I told them I’d be glad to help however I could, and invited them in.

“Are there any drugs or weapons in the house?”

He was incredulous. “Are you sure?”

“Yes.” I almost felt bad for not being a more stereotypical rebellious young artist. Like I was letting him down.

“If we find anything, it’s going to make things complicated.”

I didn’t want to make things complicated. I thought about it harder. Maybe I was forgetting something?

“Well, there’s some beer in the fridge, and some knives in the kitchen.”

I was completely serious, but he wasn’t sure what to make of it.

“Ok. Is there anyone else in the house?”

They opened up two doors and found my roommates sleeping. “Who is this?”

“Oh, those are my roommates.” I didn’t realize it was 8 am. I was up late the night before, and I figured it was 10 or 11 already, and that they had left for work.

An agent walked my groggy roommates to the living room to keep an eye on them.

It’s been kind of an unexpected wake up call. “Do you mind if I put on a shirt? And I think I’m going to sit down. I’m not feeling well.”

“Go ahead, we don’t want you fainting on us.”

I sat down on my bed and put on my glasses. While my stomach was resetting, I looked up at the agent watching over me. In this weather, I was struck with empathy for the weight of his suit, and the tightness of his tie. “Do you guys really wear that outfit year-round?”

“Yes.” I think he’s still not sure what to make of me.

That’s like “Do you know why I pulled you over?” I had to think for a moment before responding. On one hand, I’ve always heard that the last thing you want to do is give out information. That you shouldn’t answer questions unless you have to. On the other hand, I can’t stand the idea of any relationship based on a lack of communication. And I have a naive hope that if I tell them everything they’ll understand the project better. They’ll see that I did nothing “wrong,” I’m just dealing with some kind of uncomfortable topics.

I decided to tell them everything.

In early 2009 I read an article on radical openness.

In “Thoughts on total openness of information,” Dan Paluska brainstorms about the possibility of posting all your “personal” information online, asking what the repercussions would be. What if people could see every bank transaction you made? Or read every email you wrote? I started answering these questions for myself with “keytweeter,” a yearlong performance starting in June 2009. Keytweeter was a custom keylogger that tweeted every 140 characters I typed. Over that year, I learned a lot about myself and what “privacy” means. I learned that every conversation belongs to all the parties involved, so I put disclaimers in my emails. I learned that I was more honest, with myself and with others, when I knew everyone could see what I was saying.

After keytweeter, I started working on a project with Wafaa Bilal called “3rdi.” He told me he wanted to implant a camera on the back of his head that would upload a geotagged image to the internet every minute, as an exploration of “photography without a photographer.” So I worked with Wafaa to create a system that made this possible. As a professor at NYU, he had some trouble while at school due to privacy concerns. They came to a compromise where he would keep the camera on, but covered. This performance also lasted a year, over the course of 2011.

After working with text for “keytweeter,” I started exploring visual equivalents. One experiment, “scrapscreen,” made a scrapbook from your screen over the course of a day: every mouse movement “tore away” that part of the screen and saved it to a continually overlapping image. Another experiment, called “Important Things,” captures every click as a 32×32 pixel icon in a massive grid.

Later that year I worked with interactive artist Theo Watson on an extension of “Important Things,” called “Happy Things,” which took a screenshot every time you smiled, and uploaded it to the web. We got pictures from all around the world, with people smiling at everything, from cat memes to the Wikipedia article for Nicholas Cage.

In mid-May, 2011, I took a timelapse using my laptop’s webcam to get a feeling for how I looked at the computer. After a few days of recording, I watched the video.